Chiang Mai Transportation: a Complete Guide to Getting Around the City

Getting from point A to point B in any foreign country can be just that … foreign. You have been so busy planning which restaurants you want to indulge in, which day trips you want to go on, and where you should be heading after Chiang Mai that you have completed neglected to sort out transportation whilst you are there. Getting around a city may seem like the least of your worries, but knowing the ins and outs of a transportation system can really help make your trip a less stressful and a more enjoyable one. Here, a complete Chiang Mai transportation guide!

One of the easiest ways to get around the city is by renting a bicycle. For one, it is incredibly budget-friendly. Renting a bicycle (though maybe not the sturdiest of one) will set you back about ฿50 (about $1.50) a day, which is a steal. Be sure to check the breaks and the kickstand before taking off on your Chiang Mai expenditure, as we found out the hard way that kickstands (the not so stable ones, at least) are prone to fall as you pick up speed, which can be dangerous. On the plus side, you are also getting in a workout during your travels, which is a rare occurrence! For more information on how to get a workout in Chiang Mai, check out our fitness guide.
Mad Monkey Insider Tip: in Thailand, you drive on the left-hand side of the road. Be sure to make note of this before taking to the streets!

Even if you have just stepped foot in Chiang Mai, you have probably seen a few orange bicycles or two zipping around the city or parked in odd enough places. These are the new Mobike bicycles. They were first seen in China but slowly made their way to Bangkok and then Chiang Mai. You use an application to pick up a bicycle that is not being used and go along your way. They are best for short distance rides, as renting a bicycle for an entire day is cheaper than riding a Mobike around. Be sure to lock the bicycle on your application after using it. The bike spreads ecotourism awareness, as it encourages travelers to be more eco-friendly during their trip … which we love!

Renting a motorbike for a day should cost you anywhere from ฿150-300 (about $4.70-9.40) a day, depending on the quality of both the bike and shop. Many shops will ask for you to give your passport as a form of collateral for a motorbike. Unless you have bomb travel insurance, we highly recommend you do not give anyone your passport as a form of deposit, though we acknowledge it will be hard to find a motorbike shop that does not ask for it. Navigating Chiang Mai transportation is much easier on a motorbike, however, as you can get to where you need to go quickly and on the cheap!


Walk Around the City

Chiang Mai has plenty of things to see and do that are within walking distance of each other. Because it was the old capital of the country, the city is simply teeming with temples. Many are within walking distance of one another, including the incredible Wat Chedi Luang and Wat Phra Chao Mengrai. In addition to temples, you will find cool street art gracing the alleyways of otherwise unexplored sois (or streets), amazing coffee stops worth stopping off at, and much more. Strap on your best walking shoes and get to stepping!
Note: Chiang Mai is not the most pedestrian of friendly cities, equipped with sidewalks that could definitely benefit from some maintenance. Regardless, it is still easy to get around on foot!


Hop in the Back of a Songthaew

You will see plenty of songthaews, meaning ‘two benches,’ during your time in Chiang Mai. These recognizable red trucks circle the city looking for people to pick up and put in the back of their covered vehicle. They will take you to most destinations around the city for a mere ฿30 (about $0.90). This price is set in and around the city, so if a driver tells you otherwise, they are probably trying to get an extra baht or two out of you. The plus side of taking a songthaew is that you often meet some pretty cool travelers and locals in the back of these, as well. About ten people can fit in the back of one at once!

Our Chiang Mai transportation guide just got a whole lot more interesting because of tuk-tuks. Riding in the back of a tuk-tuk is a must-do whilst traveling in Thailand. Though they tend to be more expensive than songthaews, they are exhilarating to say the least and are a bucket list item that you must cross off. Tuk-tuks are three-wheeled, motorized vehicles that are normally bright in color and open on the sides. The drivers can be bartered with. We normally suggest that you accept the price of about half of what a driver normally tells you the cost of a tuk-tuk will be. If you find that it is too expensive, move on! There are plenty more to ride in.

Taxis are few and far in-between in the city of Chiang Mai, and good luck waiving one down. They are mostly found parked outside of the airport, train station, bus station, and large hotels. It will cost you ฿150 (about $4.70) to get from the airport to the city center in a taxi, which is rather expensive considering it is but a ten-minute drive. That being said, it may be more convenient than trying to hail down a songthaew with your heavy backpack. We suggest getting a taxi if you feel like treating yourself to some air conditioning and a private driver. Otherwise, there are better (and cheaper) forms of transportation to utilize.

Many of the taxis around town double as Grab drivers, and this is a more affordable way to get that luxurious ride without paying a high price. There is a ฿100 (about $3) surcharge in addition to the meter, but this is cheap in comparison to the fixed priced taxis and being able to get a ride (and quick) can oftentimes come in handy, especially when heading to places like the airport, for example.

There are three major ways to get to Chiang Mai from Bangkok: by flight, train, or bus. The cheapest way to get there is by bus, though this journey is not always the most comfortable of ways. The overnight train is an experience in itself, and we highly recommend making a long haul journey of some kind via train before departing the Land of Smiles, even if it isn’t to Chiang Mai. Getting a flight there may not be the cheapest, but it is certainly the fastest journey.
Book Your Ticket Online

If you are traveling in Thailand, there are four major airlines that can get you to Chiang Mai for a relatively affordable price. These include Air Asia, Thai Airways, Bangkok Airways, and Nok Air. Air Asia has the most flights going to Chiang Mai, with daily flights leaving as early as 5:10 a.m. and flights leaving late into the evening. You will likely land at the Chiang Mai International Airport.

Air Asia flies through the Don Mueang Airport in Bangkok. You can also fly to Chiang Mai using Air Asia from the cities of Phuket, Krabi, Pattaya, Surat Thani, and Udon Thani. Each has flights daily, but Bangkok has the most regular flights running to the city.
Contact for Chiang Mai office: +66 053 904 800 2 | Website

Thai Airways operates out of the Suvarnabhumi Airport. There are five daily flights to Chiang Mai.
Contact for Chiang Mai office: +66 053 920 999 | Website

Bangkok Airways has four daily flights to Chiang Mai. These start at about 8 a.m. Bangkok Airways is a lovely airline but also the most expensive, so if you are willing to dish out a few extra baht, this is the airline for you. These flights operate out of the Suvarnabhumi Airport.
Contact: Website

Nok Air is another budget-friendly airline that runs from Bangkok to Chiang Mai daily. You can have up to seven kilograms on your carry-on for free, free drinking water, advanced seat selection, and more.
Contact: Website

Thai Lion Air has flights that run daily to and from Chiang Mai to Bangkok from the Don Muang Airport. This Thai, low-cost airline often runs special promotions, so be sure to be on the lookout for discounts before booking.
Contact: +66 02 529 9999 | Website


Chiang Mai Transportation: Traveling from Outside of the Country

If you are in a neighboring country, there are plenty of airlines that will take you directly to Chiang Mai. These are listed below.

The bus is the most budget-friendly of ways to get to Chiang Mai but not always the most comfortable. If you have the time, however, and want to save some baht whilst traveling, this is the form of transportation for you. Ticket prices are less than $15 to get from the capital to Chiang Mai and takes about 11 hours, depending on your driver, of course. You can get a bus from the Northern Bus Terminal in Bangkok off the BTS Skytrain station Mochit, where the famous Chatuchak Weekend Market is found. It is about a ฿50 taxi to the bus terminal from the train station.
Book Your Ticket Online

An overnight train from Bangkok to Chiang Mai should take you about 15 hours. You will depart from the Hua Lamphong Train Station in Bangkok. This train station can be reached by taking a taxi or, for cheaper transport, hop on the MRT Subway and take it to the Hua Lamphong stop. It is the last stop on the line.
The night trains (as the name suggests) normally depart Bangkok in the evening, and you will arrive in Chiang Mai early in the morning. The benches that you originally sit on are converted into beds by someone working on the train and are actually incredibly comfortable. Be sure to check which train you book, however. Some are sleeper trains, some are equipped with seats only, some have air-conditioning, some only have fans … you get the point. You can book an overnight train to Chiang Mai using 12 Go Asia or directly at the station. We recommend doing so far in advance, as the tickets tend to sell out quickly. Try to book a bottom bunk, as well.
Mad Monkey Insider Tip: the Hua Lamphong Train Station is an incredible structure in Bangkok. It was built by Dutch architects and should be admired (and photographed) while you are there!

Navigating Chiang Mai transportation will be much easier if you know how to tell your driver where it is you want to go and more! Below are a few helpful phrases to make your travels less stressful. 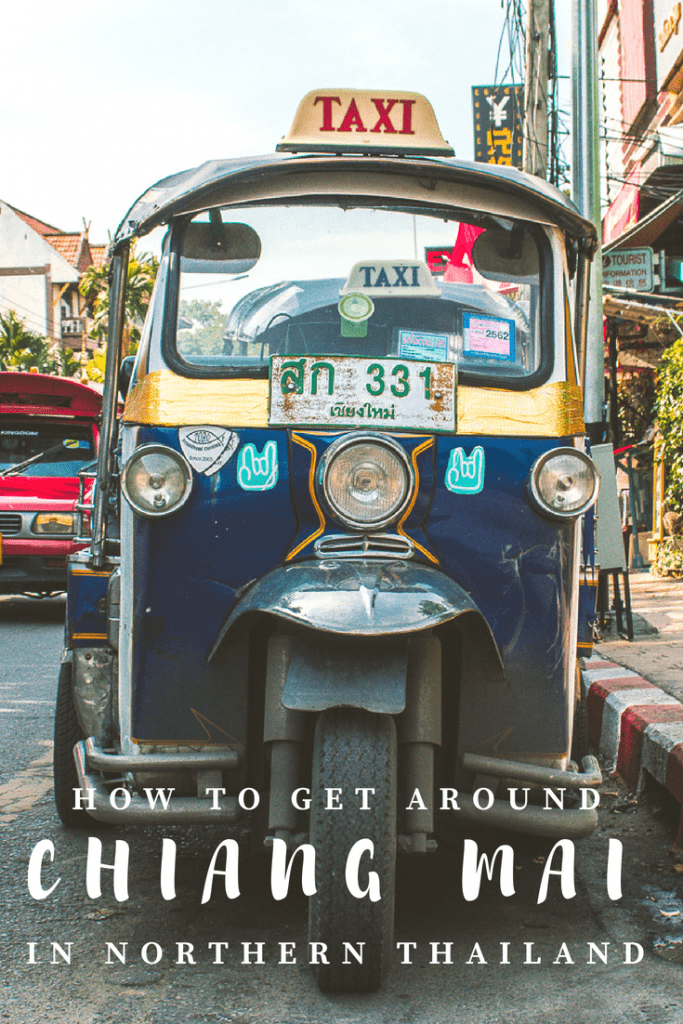