First They Killed My Father is a new film directed by Angelie Jolie. It’s a biographical historical thriller based on the memoir “First They Killed My Father: A Daughter of Cambodia Remembers written by Luong Ung. This harrowing and moving book recounts Ung’s personal experiences during Cambodia’s horrific Khmer Rouge period in the 1970s. During its reign of terror and genocide, the Khmer Rouge tortured, murdered, and staved nearly 2 million people to death.

Ung was just 5 when communist Khmer Rouge soldiers stormed Phnom Penh, Cambodia’s capital and her hometown. In the years that followed she was herded across the country, put to hard labour, separated from her family, and forced to become a child soldier. Her book is a unique account of the way a child experiences war. The story is told from the same perspective in the film adaptation.

Jolie and Ung co-wrote the screenplay for First They Killed My Father. Jolie directed and produced the film personally, working closely with acclaimed Cambodian director and producer Rithy Panh. Panh is the Director of the Oscar-nominated Best Foreign Language film The Missing Picture (2014).

First They Killed My Father premiered in Cambodia on February 16, 2017. It was screened in Cambodia’s famous Angkor Wat temple complex, outside of Siem Reap.

The Book That Inspired First They Killed My Father

“One of seven children of a high-ranking government official, Loung Ung lived a privileged life in the Cambodian capital of Phnom Penh until the age of five. Then, in April 1975, Pol Pot’s Khmer Rouge army stormed into the city, forcing Ung’s family to flee and, eventually, to disperse. Loung was trained as a child soldier in a work camp for orphans, her siblings were sent to labor camps, and those who survived the horrors would not be reunited until the Khmer Rouge was destroyed.

Harrowing yet hopeful, Loung’s powerful story is an unforgettable account of a family shaken and shattered, yet miraculously sustained by courage and love in the face of unspeakable brutality.“

(Synopsis from Amazon – you can buy the book now for paperback or Kindle on Amazon.com) 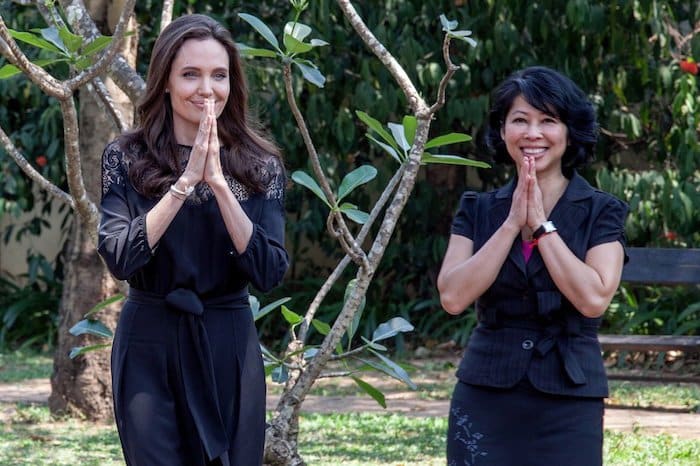 Today, Ung is a Cambodian-born American human rights activist and lecturer. She’s also the national spokesperson for the Campaign for a Landmine-Free World.

Jolie Pitt reached out to Ung over a decade ago after reading her memoir and the two became close friends.

“I was deeply affected by Loung’s book,” the Hollywood actress and filmmaker said. “It deepened forever my understanding of how children experience war and are affected by the emotional memory of it. And it helped me draw closer still to the people of Cambodia, my son’s homeland” (Jolie’s adopted son Maddox is Cambodian).

Ung said when she and Jolie met in 2001 in Cambodia she “immediately trusted her heart.

“Through the years, we have become close friends, and my admiration for Angelina as a woman, a mother, a filmmaker and a humanitarian has only grown,” Ung said. “It is with great honor that I entrust my family’s story to Angelina to adapt into a film.”

“It is a dream come true to be able to adapt this book for the screen,” Jolie Pitt added. “I’m honored to work alongside Loung and filmmaker Rithy Panh.”

First They Killed My Father was shot in Cambodian with a cast made up entirely of Cambodian actors (including over 3500 background actors for scenes of the mass deportations). It was shot in rural locations between late 2015 and early 2016. It was a very personal project for everyone involved; many of the actors in the film lived through the Khmer Rouge atrocities, or are the children of survivors.

This is the largest movie ever made in Cambodia, and the biggest movie ever shot in the Khmer language (the film has English subtitles). It’s also the first big budget film about the Khmer Rouge for international audiences since the 1984 film The Killing Fields. That story was told from the perspective of an American journalist, whereas in First They Killed My Father the protagonist is a young Cambodian girl.

Child actress Srey Moch Sareum stars as that girl – Loung Ung. By all accounts, she has given an amazing performance. She brings impressive maturity to a very heavy and sad role and story. Jolie and Ung were careful to be there for her and the rest of the cast emotionally, and to lighten the mood when necessary. Apparently, after a shoot went well, they would reward Sareum with a plate of fried tarantulas. She would be delighted, even if the foreigners on set were a bit freaked out…!

Jolie did extensive research for the film over the last few years. She visited Phnom Penh’s Tuol Sleng Museum of Genocide Crimes and Bophana Audiovisual Resource Center as early as 2015. She also met regularly with historians and survivors of the genocide to “make sure the events int he film are depicted correctly.”Pitt said in a statement that year that it is not the intention of the movie project to revisit the horrors of the war, but “to bring to the screen characters that people around the world will identify and empathize with” and to “help to teach people about this country that I love and respect, and the Cambodian culture and family life I so admire.”

It was Rithy Panh who accompanied and guided Jolie Pitt on the tours to the significant places and destination in Cambodia, including S21: the former school in Phnom Penh that was used by the Khmer Rouge as a place for torture and execution.

Maddox, 15, is Jolie’s first adopted child of 6. He was born in Cambodia as Rath Vibol on August 5, 2001. Maddox was adopted by the actress when he was seven months old from a Battambang orphanage.

Jolie and her husband at the time, Billy Bob Thornton, applied to adopt Maddox after several visits to Cambodia during the filming of Lara Croft Tomb Raider (2001) and on a UNHCR (United Nations High Commissioner for Refugees) field mission.

At the premier of First They Killed My Father, Jolie said “I cannot find words to express what it means to me that I was entrusted with telling part of the story of this country. This film was not made to focus on the horrors of the past, but to celebrate the resilience, kindness and talent of the Cambodian people.

“Most of all, this film is my way of saying thank you to Cambodia,” she continued. “Without Cambodia I may never have become a mother. Part of my heart is and will always be in this country. And part of this country is always with me: Maddox.” 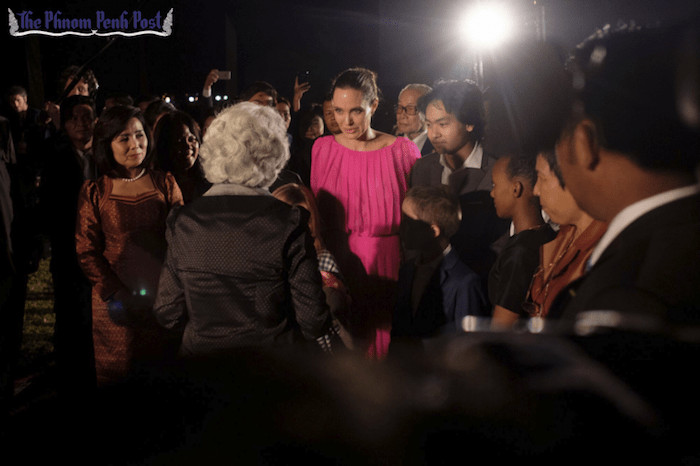 First They Killed My Father Premiere

Jolie and Ung unveiled the film at a special screening inside the ancient ruins of Angkor Thom, part of Cambodia’s famous Angkor Wat temple complex. A crowd of more than 1000 guests gathered on the Terrace of the Elephants for the occassion. The guests included local ministers and dignitaries, and many survivors of the Khmer Rouge genocide. King Norodom Sihamoni and Queen Mother Norodom Monineath were also in attendance.

The scenes from the film struck a chord for many members of the audience. Survivor Sin Nou Visakha, 65, tearfully called “the image the same as reality.” She hopes that young Cambodians will watch the film and learn from the horrors of the past. In her words, “I want young children to watch this, more than old people, because we have been through it and some of them don’t believe we suffered like that.”

Jolie and Ung held a press conference before the screening at Raffles Grand Hotel D’Angkor in Siem Reap.

First They Killed My Father played again the next week at Phnom Penh’s Olympic Stadium. The audience was near 1000 members again here.

The film will be released on Netflix in 2017. Netflix is the world’s leading Internet TV network and streams in over 50 countries. Netflix has a whopping 65 million-plus subscribers, and this global reach was a big factor in the partnership for Jolie.

“Films like this are hard to watch but important to see,” Jolie said. “They are also hard to get made. Netflix is making this possible, and I am looking forward to working with them and excited that the film will reach so many people.”

“We are proud to be working with Angelina Jolie in bringing this emotionally powerful and ultimately uplifting story exclusively to Netflix members around the world,” said Netflix Chief Content Officer Ted Sarandos. “Loung Ung’s incredible journey is a testament to the human spirit and its ability to transcend even the toughest circumstances.”

First They Killed My Father will be available on Netflix in 2017. At the time of writing, the exact release date is not known.

Viewers who are moved or intrigued by the film First They Killed My Father should consider a trip to Cambodia to learn more. Cambodia’s past is rich and well-preserved, and a vibrant and exciting future lies ahead for the country. There is plenty of opportunity to delve further into Cambodia’s history, including the dark periods portrayed in Ung’s book. There is also the chance to get to know the Cambodian people, whom Jolie cared for deeply enough to embark on this film project.

In Siem Reap you can tour the Angkor Wat temples. This site is an iconic symbol of Cambodia and the Khmer people. It’s no surprise that this was chosen as the location for the First They Killed My Father premiere.

In Phnom Penh, some cultural sites document the Khmer Rouge atrocities for consideration and reflection. Tuol Sleng, or S21 Prison, is a former schoolhouse that the Khmer Rouge used as a prison and torture site. Today it has been preserved as it was found during liberation and transformed into a museum. Choeung Ek, or The Killing Fields, is a mass grave site for victims of the Khmer Rouge. It has also been turned into a memorial and museum, with an excellent audio guide that allows you to experience it introspectively. Both sites provide moving insight into this dark period in Cambodia’s history.

‘History,’ of course, is the operative word here. As Jolie and Ung were quick to point out at their press conference, First They Killed My Father is a testament to the resilience and family spirit of the Cambodian people. The country has rebuilt itself with astonishing speed and verve.

The historical sites are paramount, but a visit to Cambodia also wouldn’t be complete with a tour of Phnom Penh‘s vibrant bar scene,  a go at the many tours and adventures waiting for you in Kampot, or some lazy days in the Cambodian islands. Cambodia is at the top of everyone’s travel bucket list these days, so it’s probably about time you booked your flight. Our Travel Guides can help you get your plans off the ground.

Further Reading on First They Killed My Father (The Film)

Here are some more articles to browse if you’re looking for more information on the film First They Killed My Father. We only recommend sites or writers that we trust and read ourselves.