How to Make the Most of 48 Hours in Berlin

The ideal mix of German history, culture and food during 2 days in Berlin

Berlin is an urban metropolis with an incredible mix of historic monuments, artistic culture, modern cuisine and crazy nightlife. The city is huge – it’s 8 times the size of Paris. From the best graffiti in Europe to giant German beer halls filling up stein after stein, there is always something to do, wherever you are in the city. With only 2 days in Berlin to fill, you’ll want to have at least a rough idea of the things you’d like to do and which iconic sights you want to tick off your bucket list. Read on for the ideal itinerary for spending 48 hours in Berlin including history, culture and cuisine.

St Christopher’s Inns Berlin Mitte hostel has just recently opened up in the heart of the city. With free wifi, free breakfast when you book direct, a rooftop terrace, modern POD bed dorm rooms, an incredible hostel bar downstairs AND an awesome location, it’s the perfect base for this itinerary, which starts in Mitte. 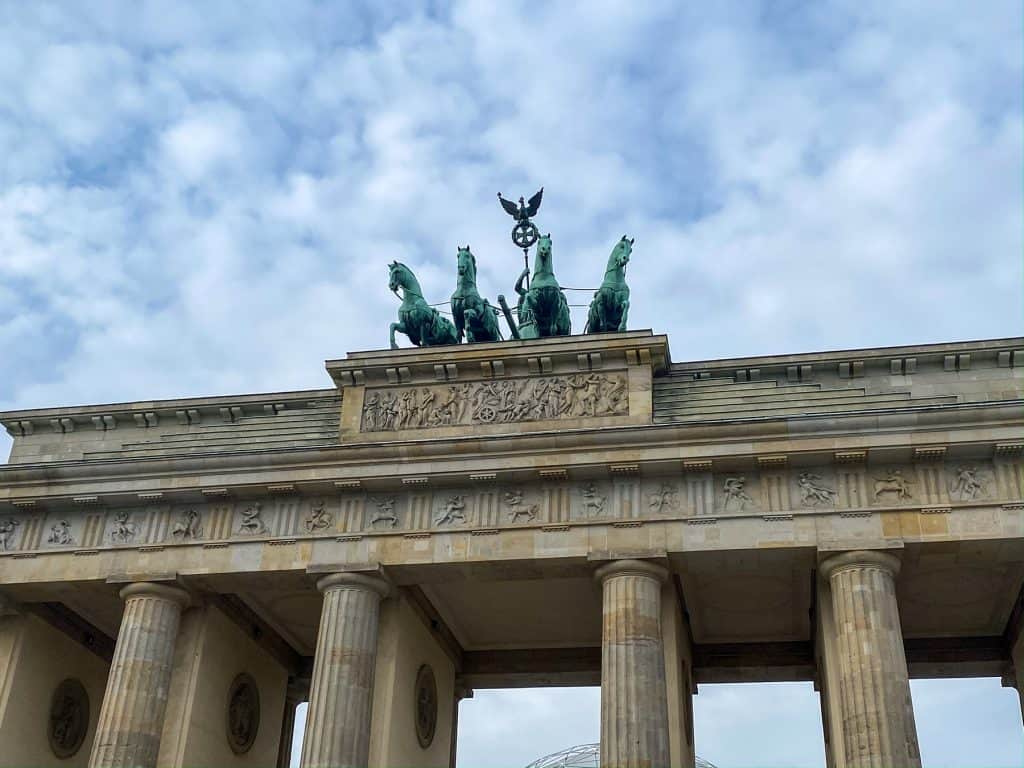 Just a 15 minute walk from the hostel is one of the most iconic sights in Berlin – Brandenburg Gate. The huge neoclassical monument stands as a symbol of Germany’s rocky history, as well as being a symbol of unity and peace across Europe, and is a real must-see when in Berlin. Just use the Citymapper app to guide you to Brandenburg Gate from the hostel – it’s our favourite travel app for getting around most European cities.

Memorial to the Murdered Jews of Europe 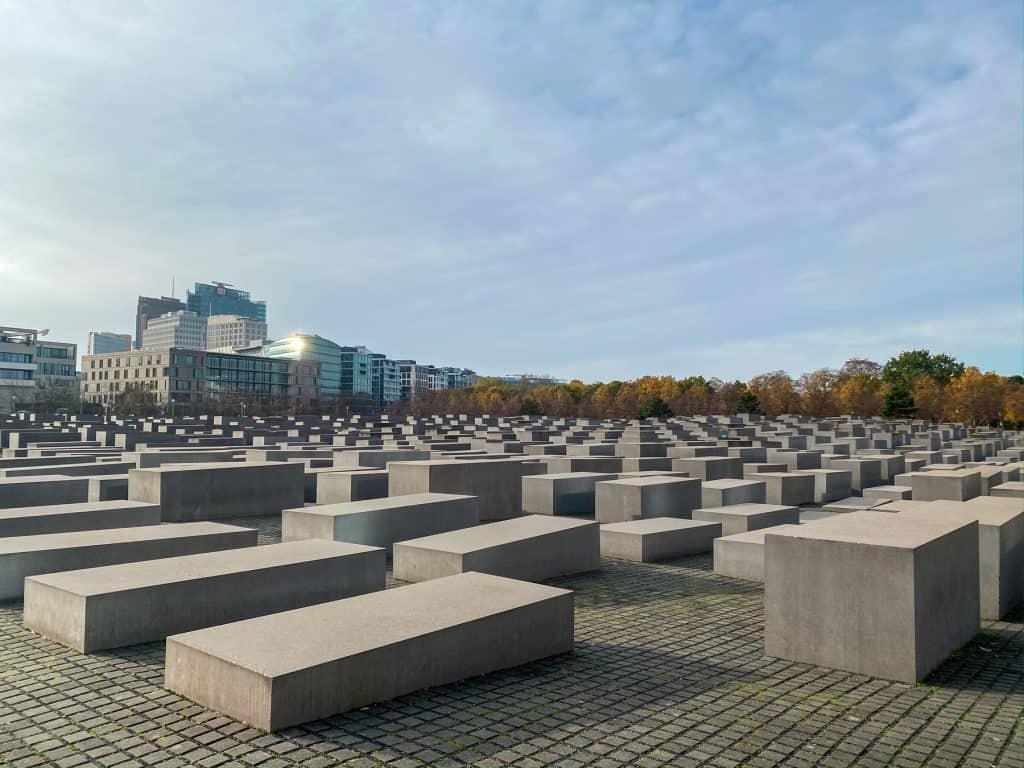 Just around the corner from Brandenburg Gate is another of Berlin’s most famous monuments. The Memorial to the Murdered Jews of Europe is one of the most important sights in the city and a poignant reminder of Europe’s devastating past. The 2,711 concrete blocks of all different heights are built upon an uneven, wave-like ground, so when immersed amongst the blocks it is supposed to give the effect of dislocation and uncertainty. However Peter Eisenman purposely designed the memorial to be open and abstract so visitors can decide the meaning for themselves. 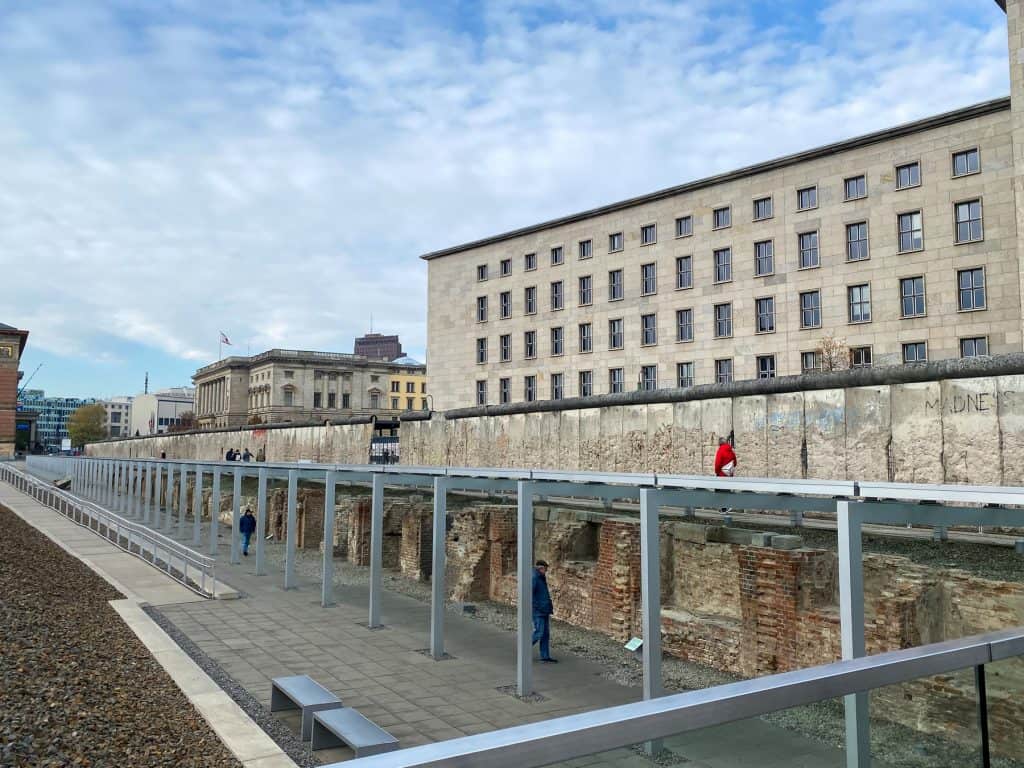 Delve deeper into the history behind the Second World War at one of the best free museums in Berlin. Again, this one isn’t far, so you still don’t need to hop on any public transport as walking will take just 15 minutes from the Holocaust Memorial.

The Topography of Terror is on the site of the SS central command, Gestapo and high command base, and inside it is full of documentation and information of the terror and persecution which was planned pretty much where you’re standing, reading about it. You’ll see some incredibly powerful and moving photographs from the war, and learn about the Nazis’ time ruling Germany and the catastrophic crimes they committed. Prepare for your emotions to be heightened as some of the photos will really stay with you even after you leave. 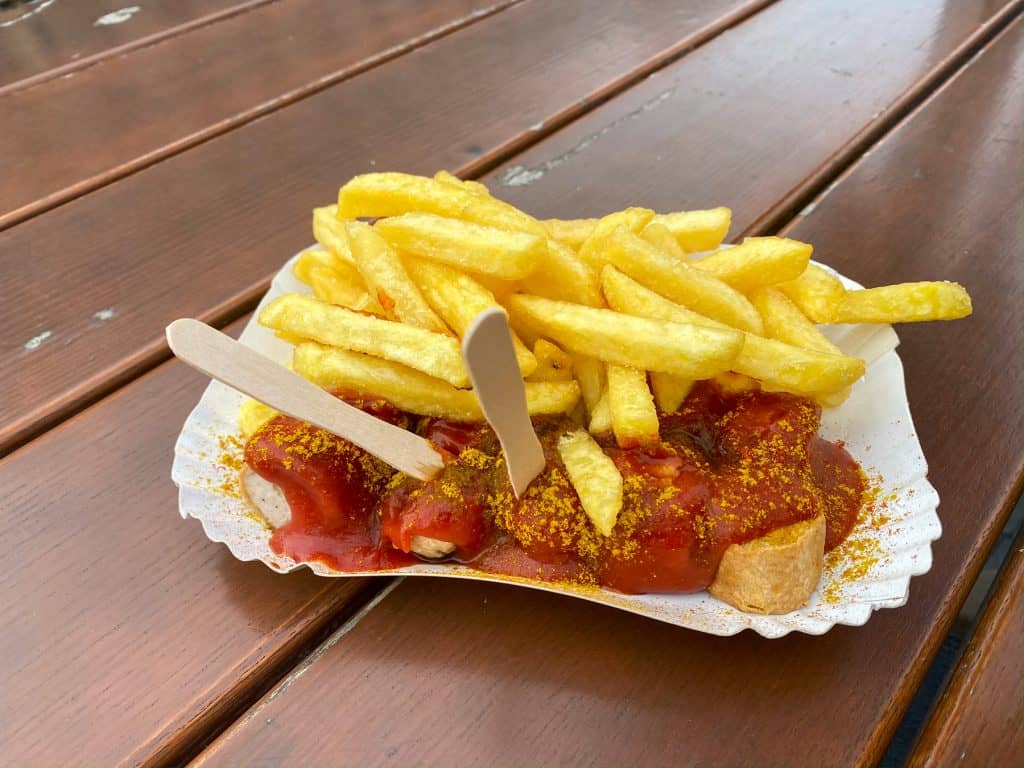 You can’t leave Berlin without a taste of it’s unofficial national dish, so when you leave Topography of Terror just head across the road to Curry at the Wall. Currywurst is a German fast food dish which consists of sausage covered in a delicious tomato-based curry sauce, usually with a portion of crispy fries on the side, and Curry at the Wall is one of the best places in Berlin to get it. Plus it’s one of the cheapest dishes in the country. 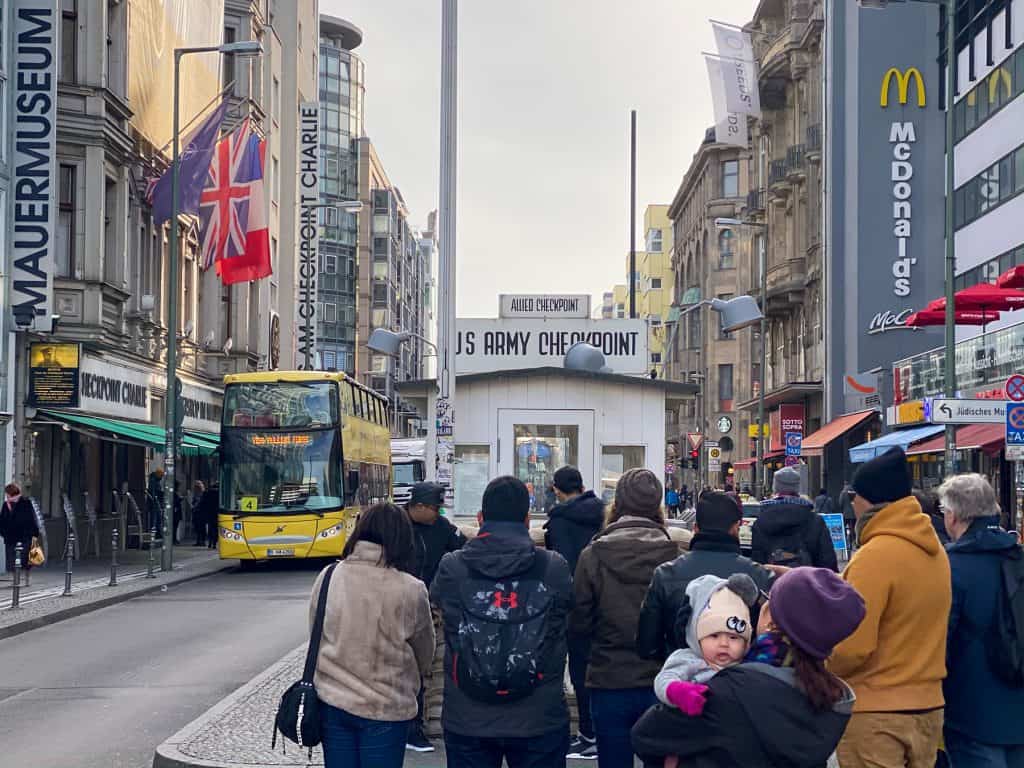 Just a little further down the road is another of Berlin’s most famous attractions. You won’t need to spend long at Checkpoint Charlie, but the history behind it is pretty interesting. Stand on what used to be the border crossing from East to West Berlin during the Cold War. Needless to say this area saw a number of attempted escapes to West Berlin. Head into the small courtyard to read more about those that both failed or succeeded to get past the heavily patrolled Checkpoint Charlie in the open-air exhibition. 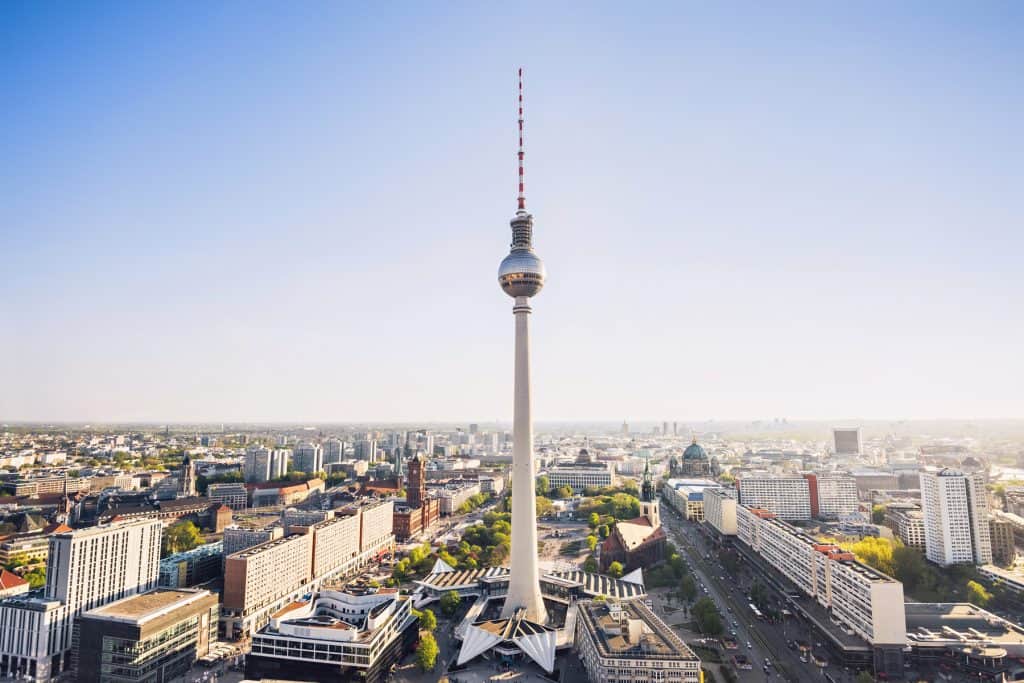 Alexanderplatz is the biggest public square not just in Berlin, but in Germany. Around here you’ll find plenty of shops, restaurants, cafes and bars, as well as the most stand-out feature in Berlin’s skyline. That towering, needle-like structure is the Fernsehturm aka the TV Tower. If you want you can pay to go to the rotating restaurant, or up to the observation deck for incredible 360 degree views 203m above Berlin and its surrounding forest.

Alexanderplatz is also known for being a great transport hub, with easy access to all over the city via S-Bahn, U-Bahn, regional trains, buses and trams. To get here from Checkpoint Charlie simply walk to the U-Bahn station, U Stadtmitte, and take the U2 line in the Pankow direction to Alexanderplatz. 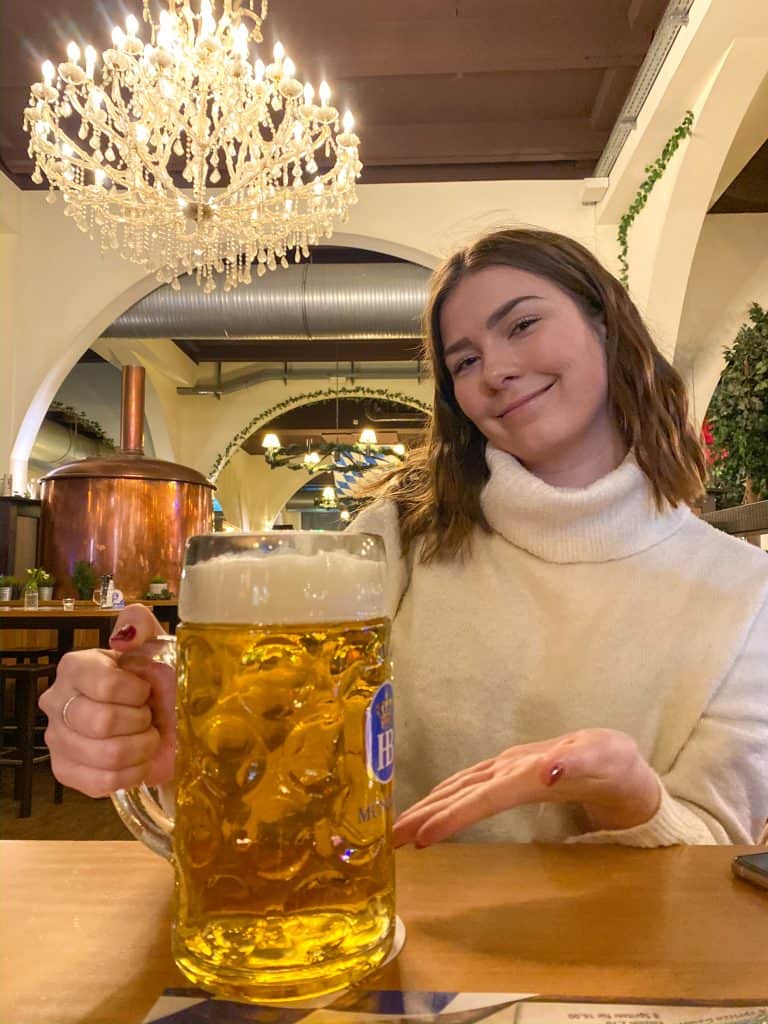 Is there anything more quintessentially German than a stein of beer? Hofbrau is just around the corner from Alexanderplatz and is one of the best bars in Berlin to enjoy a proper German stein. Enter the enormous beer hall, packed with rows upon rows of long tables and benches, and order yourself a litre of Hofbrau beer. They also serve up all the German classic dishes like pork knuckle and schnitzel if you’re hungry already. 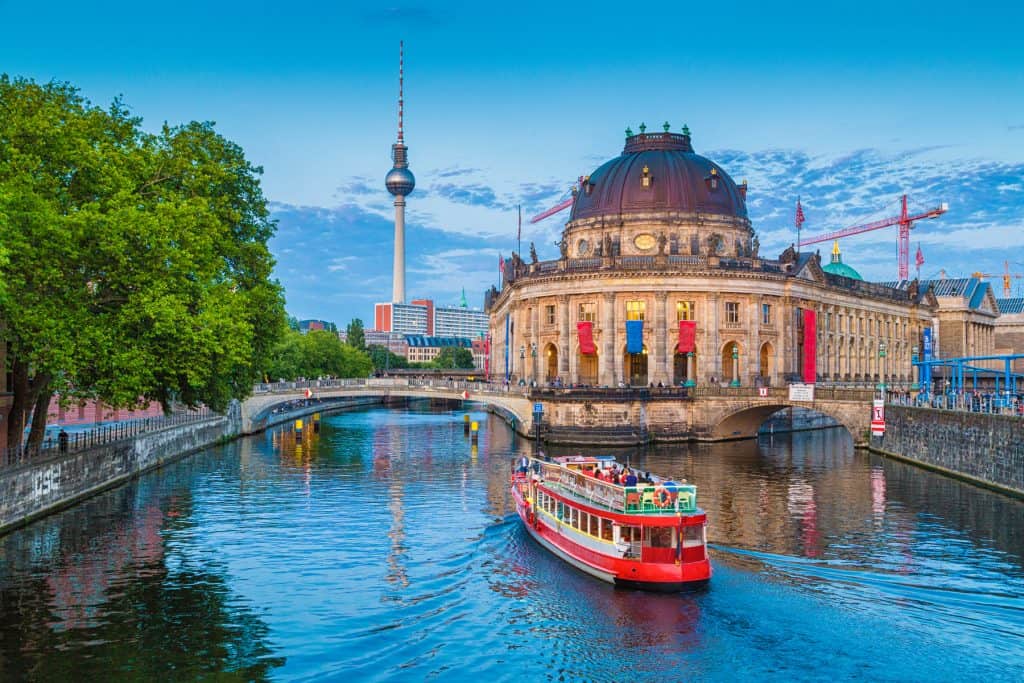 To get back to the hostel from here is only a 20 minute walk, and on your route back you can easily pass by Berlin Cathedral and Museum Island – one of the most instagrammable spots in Berlin. The ‘island’ is made up of five museums (hence the name), all of which are a delight to the eyes of those who appreciate stunning architecture. If you have time now, why not buy a ticket and head inside as you’re passing? You’ll first stumble across Berlin Cathedral with the incredible regal, green dome, then as you walk along the river to the bridge right at the end is one of the best viewpoints in Berlin. 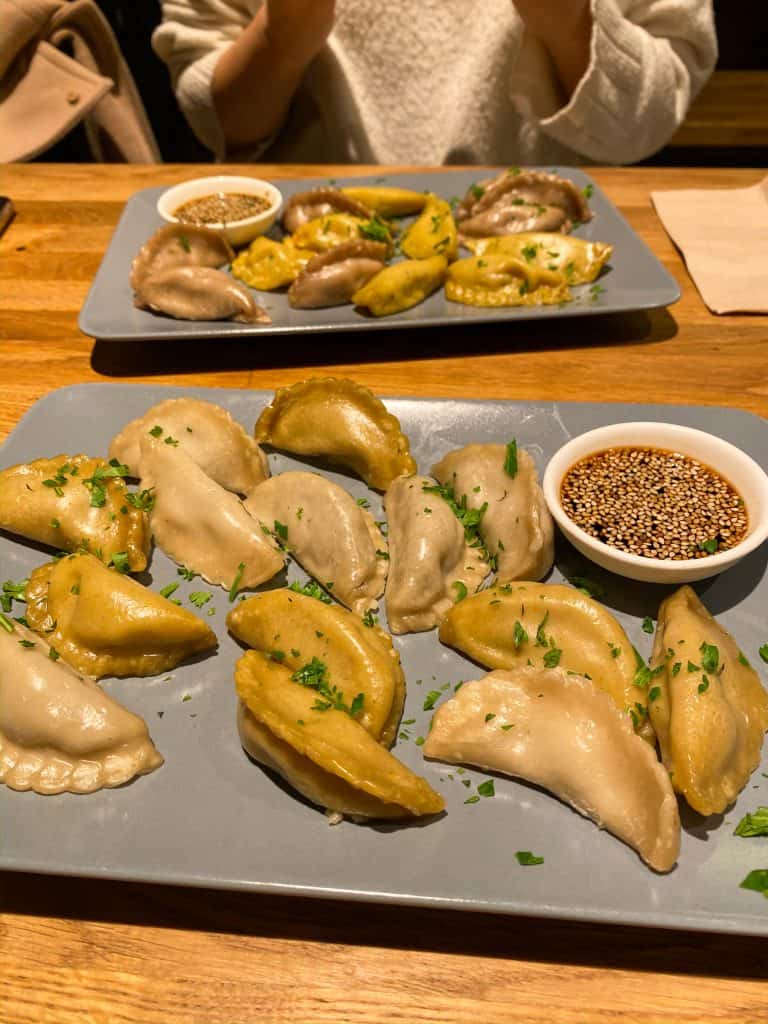 After a quick refresh at the hostel which is just around the corner from Museum Island, head back out for some food about a 10 minute walk away. If you like dumplings, Momos is the place to go. Did you know Berlin is one of Europe’s best cities in Europe for Asian cuisine? At Momos, the entire menu is vegetarian. Choose how many dumplings you think you can eat, pick two of the flavours on offer from cheese and potato to pumpkin and chickpea and then decide which sauce you’d like with them. Plus, you’ll be full up for amazing value! 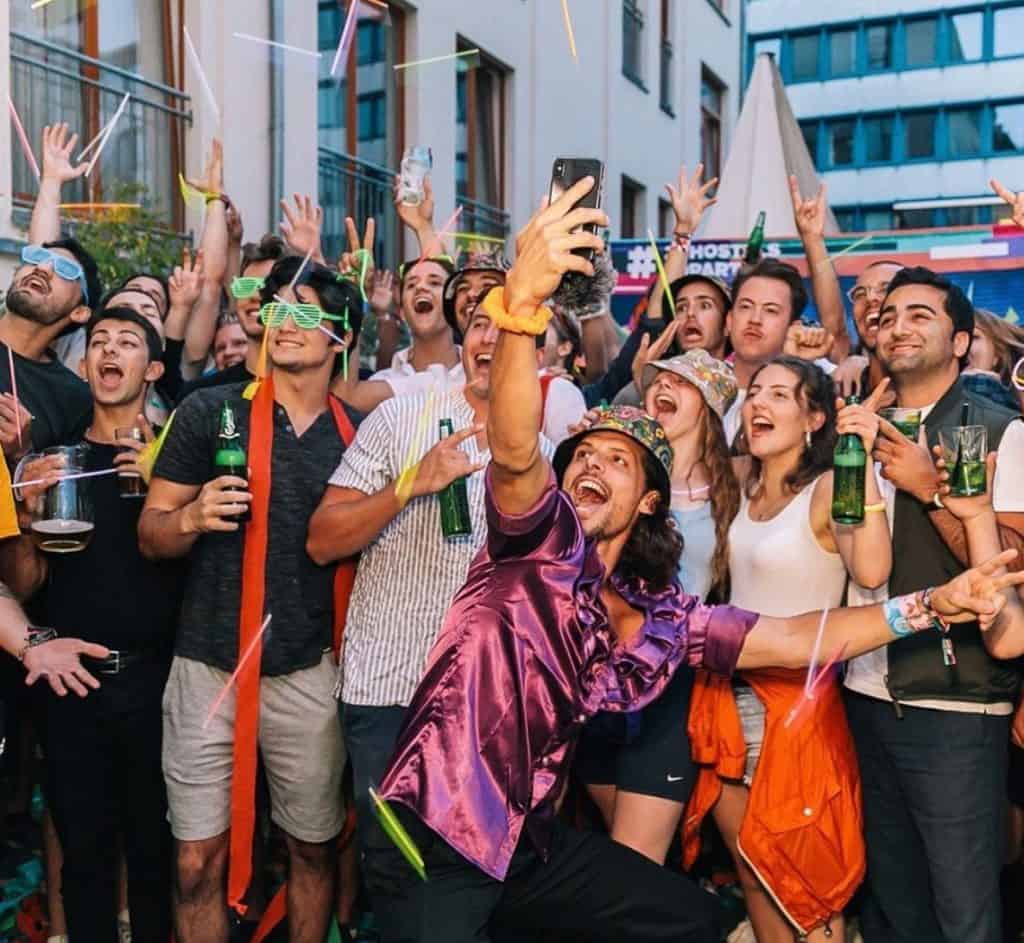 Belushi’s is the best hostel bar in Berlin, and the newly opened branch, Belushi’s Mitte, will really get your night off to a good start. When you stay at St Christopher’s Berlin Mitte, you only need to head downstairs for incredible Happy Hour drinks and guest deals. There are some great beers on tap plus a whole cocktail menu to get through. Plus, if there’s a big sports game on TV that you don’t want to miss, Belushi’s is probably showing it on their big screens so you won’t even miss it.

Berlin’s nightlife is world-class, so you can either spend the night going mad at Belushi’s or head out into town for a big night out, Berlin-style. Just remember you’ve got another day of sightseeing ahead of you… Berghain is the most famous club of them all but boy, is it exclusive – if you get let in, you can consider that an achievement. SchwuZ is one of Berlin’s longest running dance clubs, Chalet is all about house, disco and techno music, and Tresor is the first techno club in Berlin based right there in Mitte. 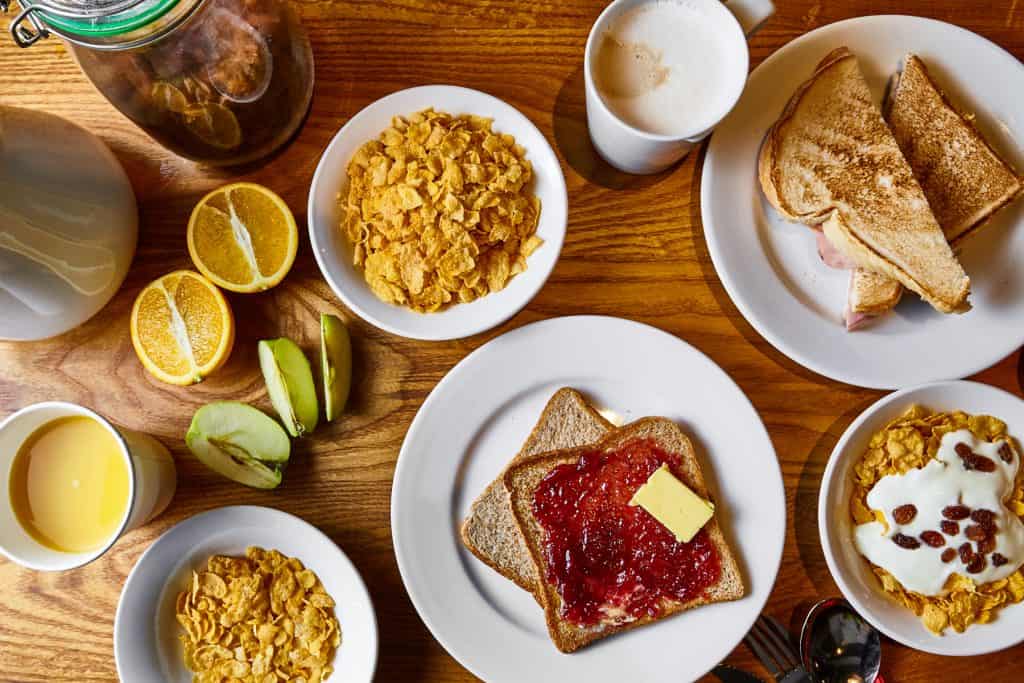 Start day two by filling up on (and soaking up the alcohol with) the free hostel breakfast you get when you book direct at St Christopher’s. Grab yourself a coffee with some cereal or bread with ham and cheese, and make sure you eat enough to get you through to the afternoon! 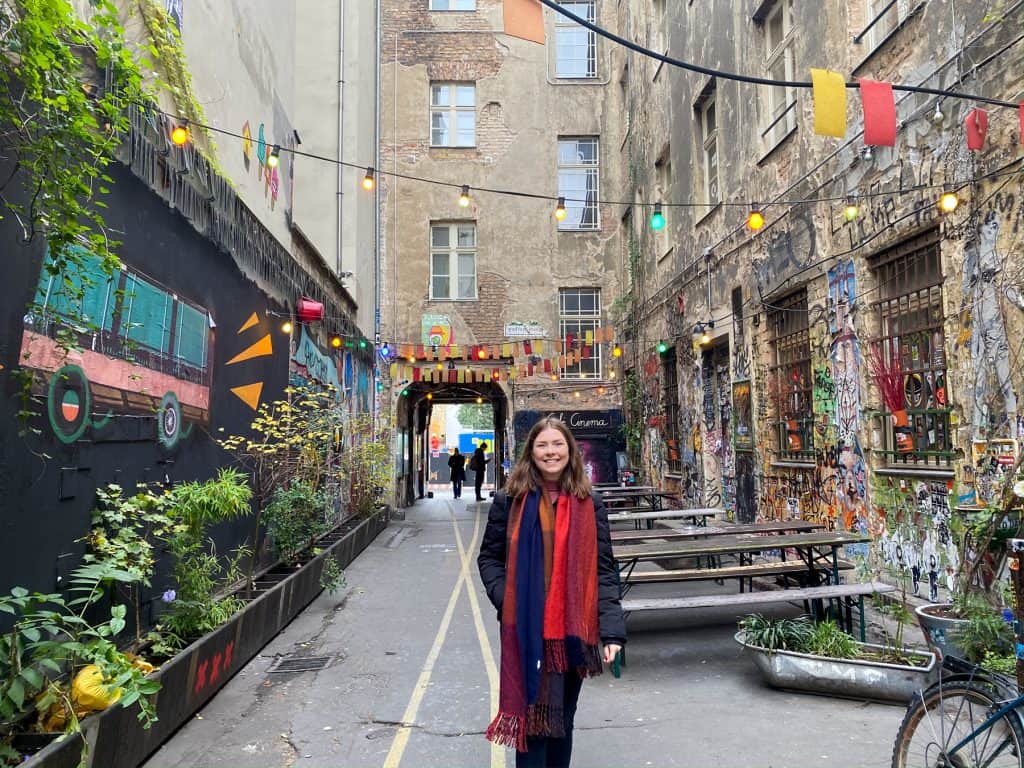 If you only got to see Museum Island after dark, now is your chance to see it in daylight. Head back along the river, past the museums, to one of Berlin’s most bustling shopping areas called Hackescher Markt. Around here you’ll find plenty of up-and-coming design and clothes shops. Hackescher Hof is a courtyard full of these sweet little stores which are photo-worthy in themselves. Plus, there’s an exceptionally good coffee shop called Ben Rahim where you can stop for a coffee pick-me-up.

It’s definitely not a cheap shopping area, however it’s worth visiting even if just to see Street Art Alley. This charming old alleyway is covered from top to bottom in incredible street art (you’ll soon realise this is a big part of Berlin’s cultural scene as you make your way through day two). 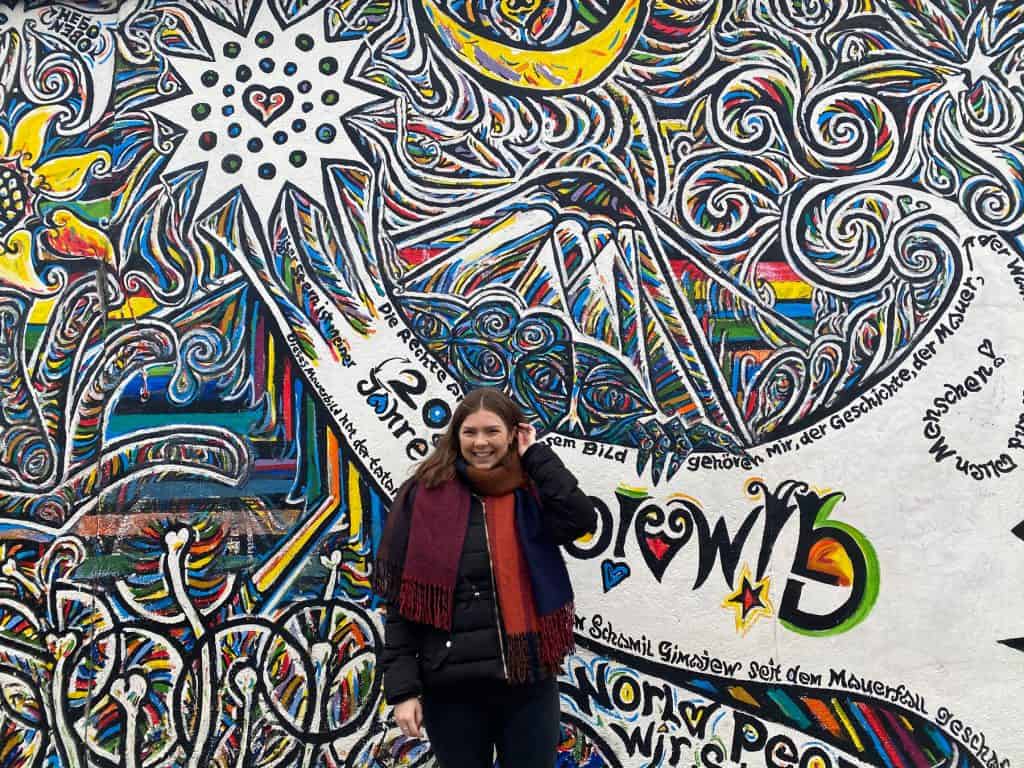 The East Side Gallery is the shining star on Berlin’s graffiti scene. What was once 1.3km of the historic Berlin Wall is now the longest remaining stretch of the Wall and the world’s longest open-air gallery. Within days of the Wall coming down, 118 artists from across the world arrived to create the East Side Gallery. Walk along the wall and marvel at the over 100 incredible, colourful and varying pieces of art which all give nods towards the political changes which occurred back in 1989 and 1990.

Getting here is easy from Hackescher Markt. Simply hop on the S-Bahn for 3 stops and get off at Ostbahnhof, then it’s just a short walk to the edge of the Spree where the East Side Gallery begins. 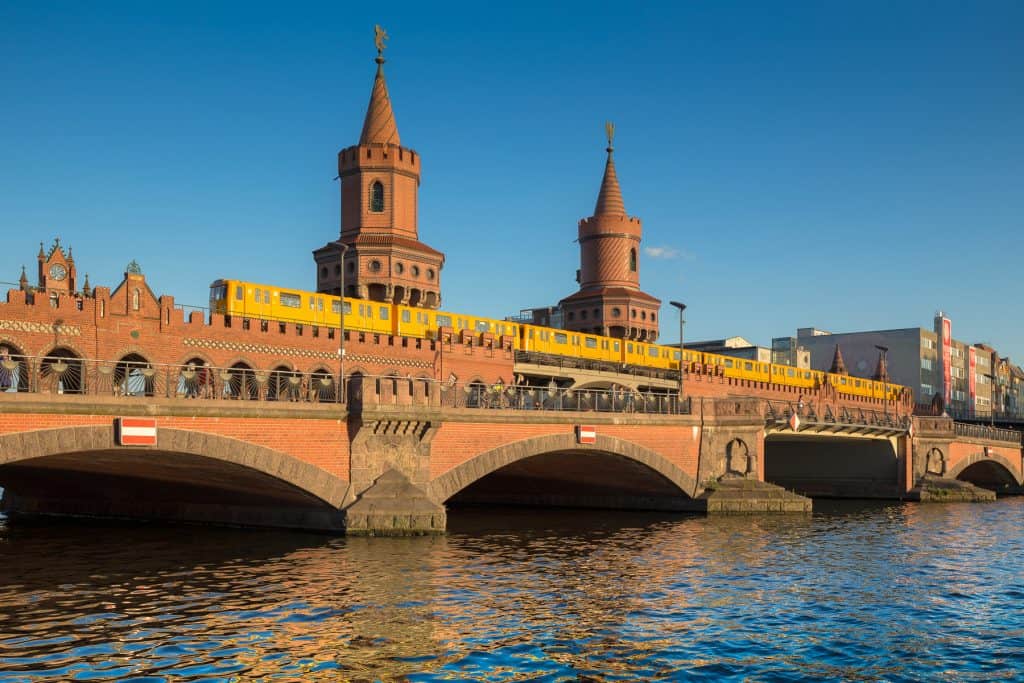 Perfectly located at the other end of the East Side Gallery is one of the most instagrammable bridges we know about. Oberbaum Bridge doesn’t just connect the districts of Friedrichshain and Kreuzberg over the river Spree, it’s an architectural masterpiece built back in 1895. What makes the bridge even more photogenic is when a bright yellow U-Bahn train runs across. The colour of the train set against the rustic red brick and medieval turrets just asks to be photographed. 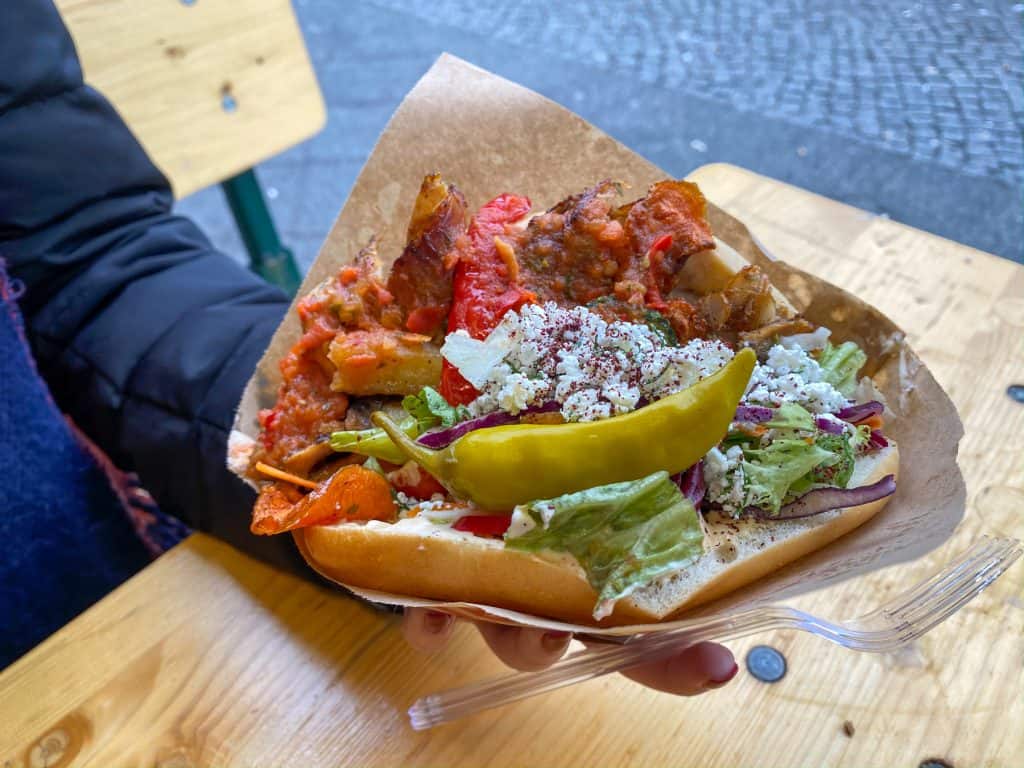 Aside from currywurst, kebabs are Germany’s thing. When you go to Mustafa’s you need to expect to have to queue – the place is iconic! While there is a branch in Hackescher Markt, there’s another one not far from Oberbaum Bridge. For €5 you get a chicken doner kebab which comes absolutely packed with juicy chicken, roasted vegetables, salad and a sauce of your choice. It’s pretty messy, but worth the risk. 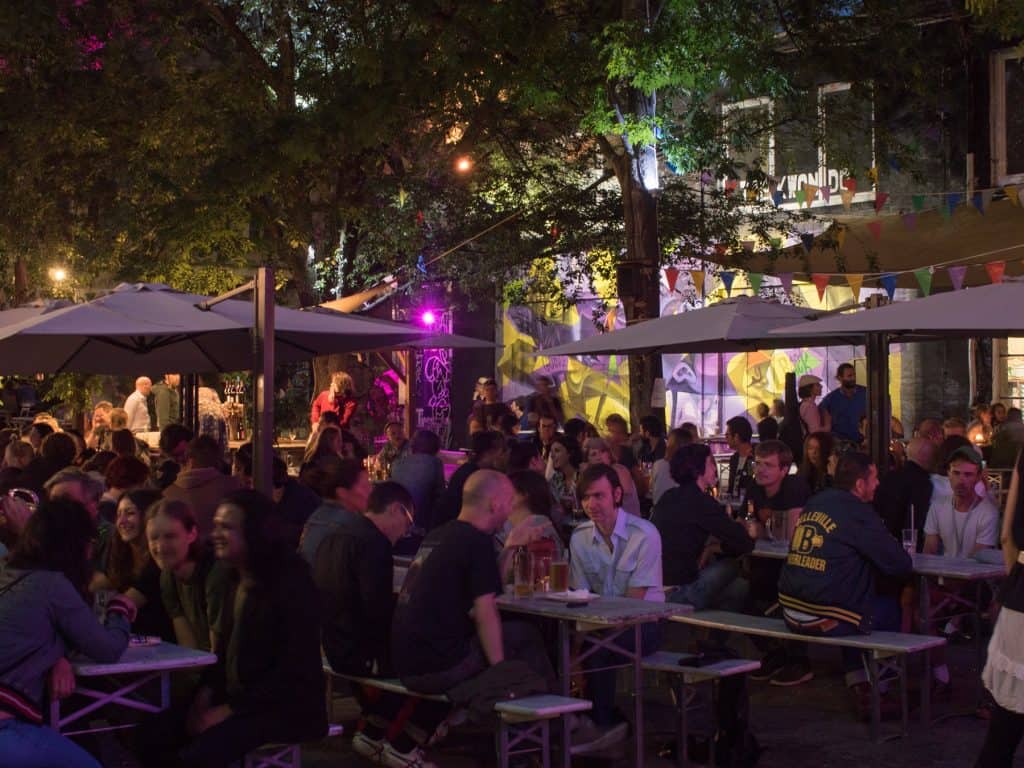 On your way to Mustafa’s you may notice an interesting, open area down the steps on your right. This is Urban Spree – a place for cultural celebration through art exhibitions, concerts, DIY workshops and street food. Urban Spree Galerie
is an urban contemporary art space which puts shows together each month so there is always something new to see. Whether you’re there for more street art, the art exhibits, live music in the Concert Room, the street food or the biergarten in the summer, those that like something a little quirky and contemporary will love it.
Looking for a bed in Berlin? Check out St Christopher’s Inns Berlin hostels