Khmer Art Insider: 5 Street Artists To Keep An Eye Out For In Cambodia

So your trip to the Kingdom of Wonder is booked and you’re starting to plan some plans. Hopefully during your time in Cambodia you’ll not only want to take advantage of the extremely cheap beers, but also to take in a serious dosage of the local Khmer art culture.
We’ve always been massive fans of street art. So much so, we’ve decked out our hostels head to toe in some very funky murals and artistic expressions. The backpackers’ own Khmer art gallery… 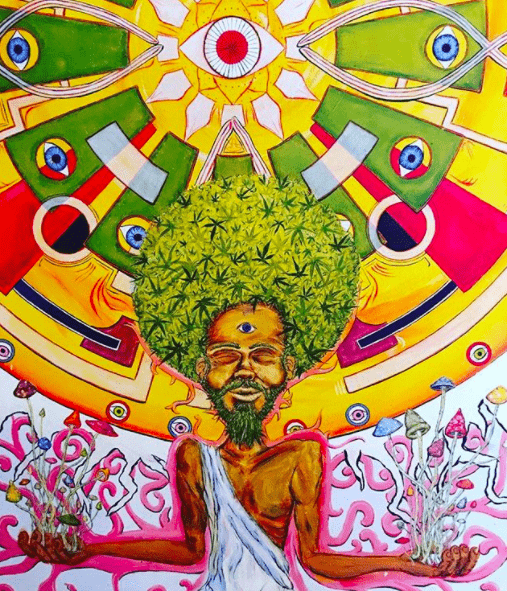 Street art is an extremely new medium of expression in Cambodia, and is also incredibly accessible to all. Its ability to illuminate the local community is inspiring. Oh yes… and it doesn’t cost anything to enjoy.
In this piece we’re going to give you the inside scoop on the 5 street artists that are making waves across Cambodia. Not only that, but we’ll be hooking you up with the secret locations of their most famous works, and the Cambodian street art festival that brings all of this wonderment together.

The Khmer art scene hasn’t had the smoothest of histories to date…
Art is something which is associated with freedom of expression. A fundamental human right. However, under the torrid Khmer Rouge regime, it was feared that the once flourishing Khmer art scene would flounder.
Pol Pot, the nefarious leader that spearheaded the Khmer Rouge regime, made it his mission to rid the country of all forms of creativity and intellect. This spell led to the death of millions of inspiring individuals; including teachers, scientists, and artists.
Since the Khmer Rouge regime was overthrown in 1979, Cambodia’s creative personality had been reconstructing itself.
In recent years, most destinations are gloriously awash with opportunities to once again experience the magic of Cambodia’s true artistic ability.
A different medium…
Graffiti and street art in Cambodia was never very common historically, but that’s changing fast due to the relatively young and increasingly urban and networked population.
While many pieces are done by people passing through or immigrants who live here, locals are discovering the joys and thrills of tagging as well. Nowhere can you see this more clearly than in Phnom Penh’s Boeung Kak neighborhood.
So let’s get experiencing this magic…

Khmer Art Insider: 5 Street Artists To Keep An Eye Out For

We spy with out little eyes, somebody beginning with ‘K’… 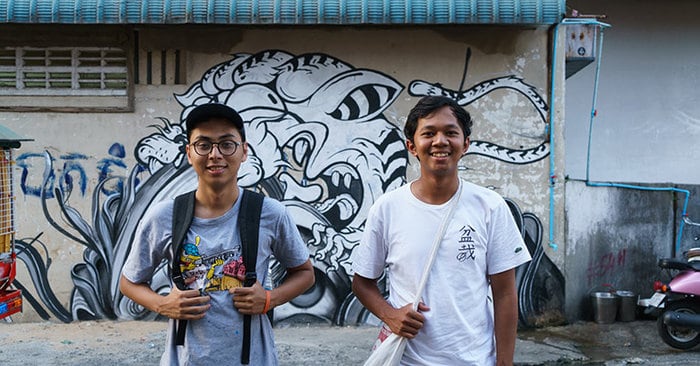 Kimcheon Koy (on the left) is a 19 year Cambodian based out of Phnom Penh. In collaboration with studying architecture, Kimcheon has been teaching himself the ins and outs of the Khmer art scene for the past 3 years.
His style tends to combine traditional Khmer art influences with his own experimental expressionism. Expect lots of cutting edge stencil work, projector traces, and free hand wizardry.
Not only have his works been featured at a number Cambodian festivals in the last couple of years, but he had the honour of being flown out to Lille for the Lille3000 art festival in October 2015.
Keeping the Khmer people at the heart of his art…
In May of this year, alongside his artistic partner David Myers (on the right in the photo above), Kimcheon launched a Phnom Penh Art Tour. His mission to expose people from all walks all life to Cambodia’s flourishing art scene.
This Khmer Art Tour takes on many forms. You’ll explore some of the city’s greatest works by Tuk Tuk, and may even be invited into an artist’s studio. At this rate, Kimcheon’s vision will be sending ripples not only to those in Cambodia, but beyond into the wider artistic sphere… 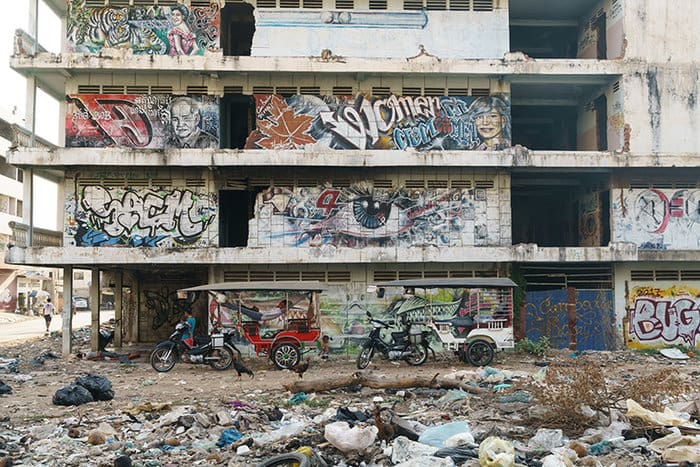 Instagram: @theo_vallier
Theo Vallier has been jazzing up the streets of Phnom Penh since 2007. Continuing the French connection, he was born in France in 1980, and went on to have his work exhibited in both Paris and Marseille.
Since arriving in Cambodia, his sole focus has been to incubate and grow the blossoming street art scene by working with the younger generation to develop their artistic personalities and style.
“I really want to try and develop the street art scene in Cambodia, and that’s my most important goal,” Theo tells us. “It was hard when I first got here because nobody really knew about it or understood what it was about.”
True showmanship…
Theo, with the help of his partner in artistic crime, Chifumi, launched the annual Cambodia Urban Art Festival in April 2015. The festival brings together creatives from all walks of life who contributing towards graffiti tours, hip-hop evenings, and Khmer art coaching sessions for up and coming artists. 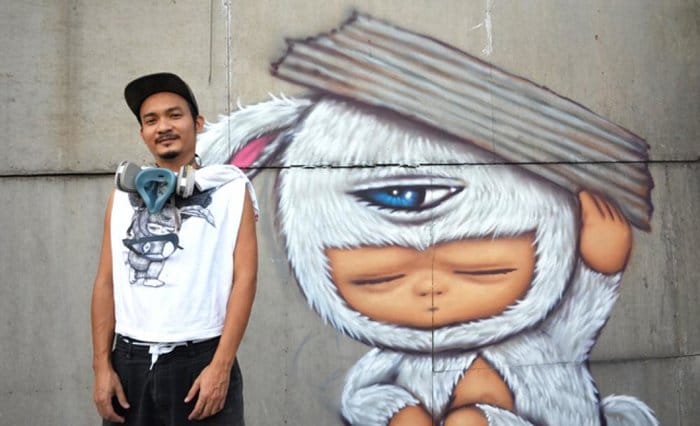 Alex Face is one of Bangkok’s most prominent street artists.
His iconic character Mardi, a kid in a bunny outfit, has gone on show in London, Korea, and now in Cambodia.
The inspiration…
“Mardi was actually inspired by my daughter. When she was just born, her face looked so grumpy, like she was thinking really hard or worrying about her future in this troubled world. I sketched her face and started creating Mardi, a little child who wears a ragged rabbit suit. Rabbits also symbolize being a victim in this world.”
If you’re wanting to get face to face with the works of Alex Face, you better head on down to the evocative Boeung Kak neighborhood in Phnom Penh. 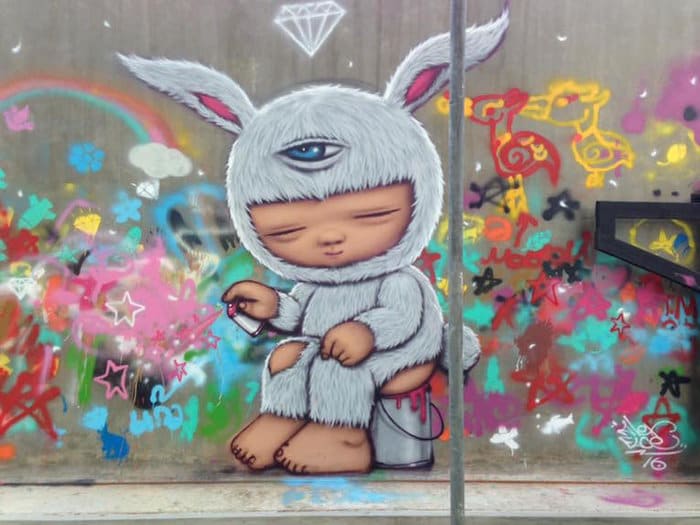 Instagram: @lisa_mam_art & @peaptarr
A Cambodia and New Zealand match made in heaven…
Cambodian-born-and-bred Mam has a real passion for Khmer art, but it wasn’t until she was introduced to Cambodian New Zealander Tarr, a street artist with international experience, that she started pursuing her passion seriously.
As the first official female street artist in Cambodia, Lisa has been perfecting her unique style since 2010. She’s also been featured in several collaborative exhibitions throughout South East Asia.
Lisa’s artistic mission and beliefs…
“My goal is to inspire the young Cambodian generation to develop their own sensibility and taste towards Khmer art without copying from other cultures. It’s really important to cultivate your own identity. It helps other people realize where you come from and express who you really are”
The dynamic duo have now started a killer collaboration, with each piece inspired by Cambodia’s rich heritage, including the famous hand gestures of apsara dancers and the five-headed dragon, Naga.
Bringing street art to the insider experience…
Mam and Tarr’s work can be seen in a number of Phnom Penh’s restaurants, bars and cafés. 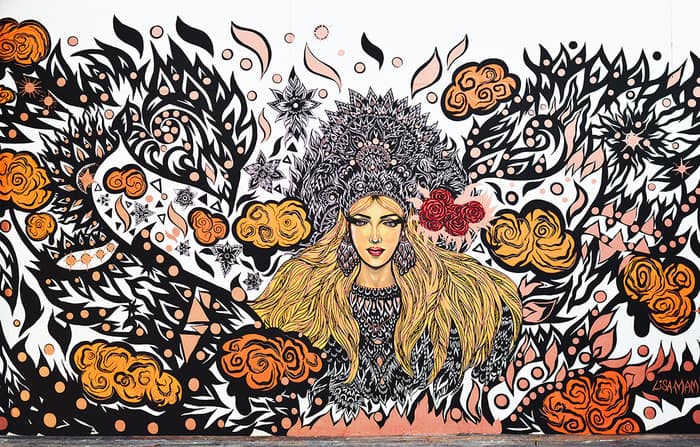 Another street artist that’s building bridges between France and Cambodia…
Chifumi was born and raised in the east of France. He’s currently showcasing his artistic prowess all across the Cambodian capital. His signature piece is brought to life by huge murals of hands dancing on walls.
He applies this body gesture to symbolize different meanings, depending on the city in which he’s currently residing.
From Paris to Phnom Penh…
The dancing hands always use contextual and local elements. These are brought together to create a sensible approach to social art.
As we mentioned earlier, along with his artistic buddy Théo Vallier…
Chifumi founded and curated the Cambodia Urban Art Festival, a festival in Phnom Penh that have for goal the development of urban expression in Cambodia. 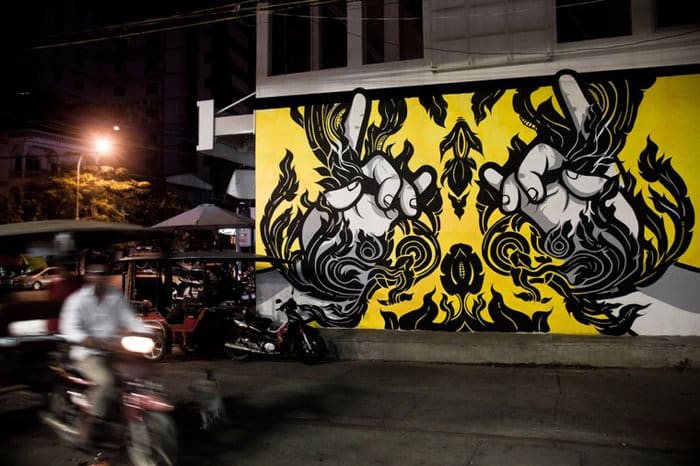 Khmer Art: Where In Phnom Penh To Get Your Khmer Art On…

The core of the street art runs along Street 93, a relatively quiet street devoid of selfie stick wielding tourists. The area’s deserted spaces, derelict buildings, and crumbling facades give it a ghostly vibe that’s the perfect backdrop for pops of artwork.
If you’re looking for an artistic hub to retreat to after the street art wandering sessions, pop in for a few beerios and a good ol’ fiesta at the Mad Monkey Hostel Phnom Penh.
It’s going to get funky…

Have a peek inside the Mad Monkey Hostel Phnom Penh

More Articles On Khmer Art To Get Your Creative Juices Flowing

If our list has whet your appetite and you’re hungry for more. Check out these pieces on the best Khmer art experiences! We only recommend bloggers we ready often and love: