Mad Monkey Fire: The Cambodian Show That Can't Be Missed

It certainly shouldn’t be news to you that Cambodia itself is one never ending show. A cultural assault on the senses that will leave the majority of travelers in all sorts of standing ovations. One show in particular that we pride ourselves on is our Mad Monkey Fire show on the one and only Koh Rong Samloem. 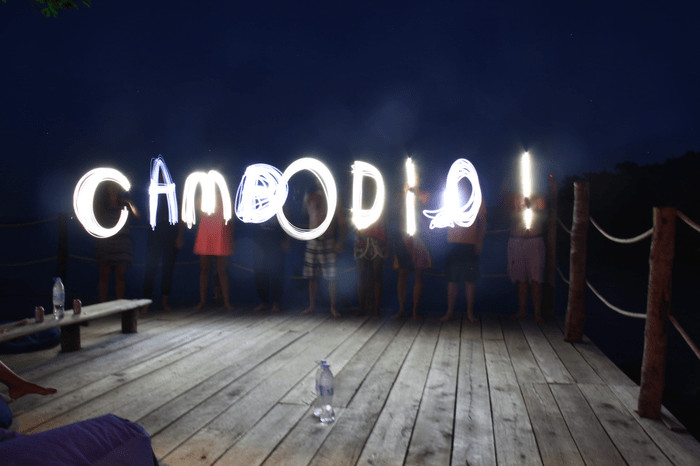 Besides the sprawling tropical haven, the naturally luxurious dorms that gaze out over the horizon, and the parties that will need at least a page in your backpacking memoirs, there’s one standout visual spectacle on Koh Rong Samloem that will certainly leave you with that warm fuzzy feeling.
Blaze of glory… 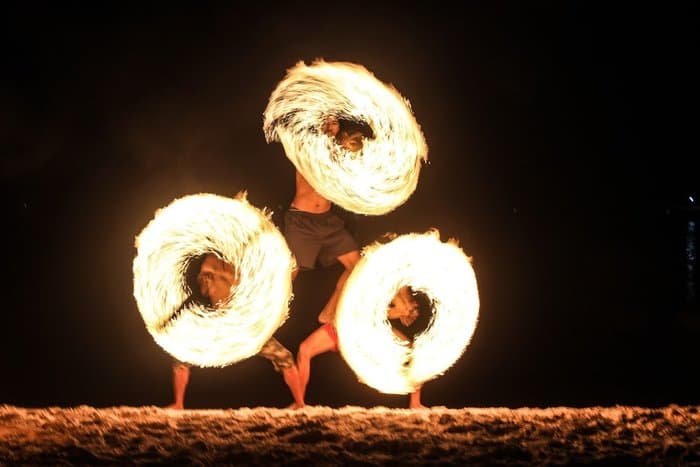 The Mad Monkey Fire show is one of the headline acts on Koh Rong Samloem. Twice a week, our Cambodian staff will grace the tropical shorelines with a fiery fiesta that illuminates the sparkling sky overhead.
Started from the bottom now they’re here…
Our legendary Mad Monkey Koh Rong Samloem staff conceived the idea for the fire show. They took it upon themselves to spend an endless number of evenings gathered around a laptop learning how to master the art of fire artistry. All from Youtube videos, just like this one…

All of our guests, as well as other specimens on the island, are welcome to come and absorb this Cirque du Soleil-esque showboating.
What’s more, the icing on this spicy experiential cake…
Our Mad Monkey Fire show won’t cost you a dime. It’s absolutely free.

Mad Monkey Fire Show: The Inception Of The Fire Show

So, how did these magical fire performances first come into existence? For this one, we’ll be stepping into our Mad Monkey time machine and diving hundreds of years back.
There are two early civilizations that certainly have a strong claim to the fire show inception throne…
The Aztecs and the Maoris.
The Aztecs were known to perform fire dances dedicated to their God of Fire, Xiuhtecuhtli.
The Maoris’ story however, is a bit more intricate…
It’s difficult to pinpoint exactly where across this sprawling 4,000 metre entourage of tropical islands; but we do know that the ‘Big Bang’ of fire performances was courtesy of the Maori tribes of New Zealand.
As part of their pre-emptive training for battle and hunting, Maori warriors would spend hours swinging a heavy ball round on a string. This integral ball on a string to our fire show investigation, was known as ‘poi’.
First used to develop strength, poi eventually became a very popular form of storytelling, dance and strengthening that wrist action…
However…
We’re sure you’ll all be flabbergasted to discover that the Maoris never actually set their ‘poi’ on fire. They were missing a trick. It wasn’t until inspiration from the Samoan fire knife shows had reached New Zealand before they actually lit their balls on fire!

Mad Monkey Fire Show: The Equipment Of The Fire Show

As with many forms of technology across the travel sphere, the Mad Monkey Fire show equipment has come a long way since the days of the Aztecs and Maoris.
Having previously been constructed from natural flax fibers called muka, and anchored with the middle of the raupo stem; nowadays more durable synthetic fibers consisting of bright colours are used.
Not only that, but the ‘poi’ has also been subject to some very fiery innovations. Now, appearing in forms such as fire devil sticks, fire diabolos, fire fingers, fire hula hoops, fire skipping ropes, fire whips (for those wanting to really spice things up in the bedroom), and even fire yoyos.
A lot of those may seem like gibberish to you.
However…
To put the faces to the names, as well as check out other fire equipment, have a quick gander at Oddball’s Fire Equipment.
Now, it would be plain rude to tee you up with all this excitement, without giving you a heads up to where the best fire shows will be during your travel extravaganza.

There are a number of extremely reputable fire shows across Asia and the wider travel sphere, other than the Mad Monkey fire show on Koh Rong Samloem of course. Check out some of our fiery footage in the short video below…

Here’s a breakdown of some of our favourites. Some are very traditional and there are a couple that venture into a different realm of fire manipulation…
Southeast Asia is a region that has more than embraced the art of the fire performance. With a huge number of extremely picturesque beaches, it paints the perfect backdrop for a good old fashioned fire show.

Koh Tao is home to many beautiful things, the Sairee Beach fire show is right up there with the best of them. Grab a cocktail and immerse yourself in the tranquility of the fire dancing on the tropical horizon. 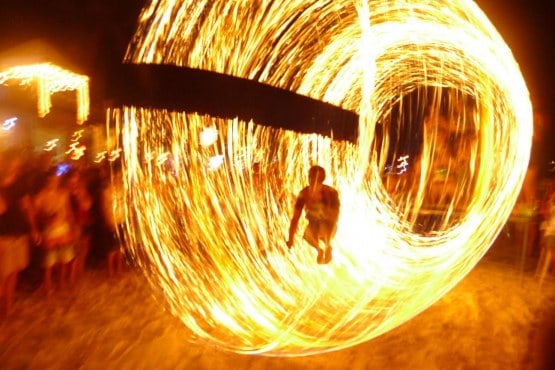 Those of you who’ve felt the euphoria of the Full Moon Party may well have come across this fire phenomena…
The infamous flaming skipping rope!
Many a traveler has been singed by this mystical being. With a huge crowd gathered to cheer on whoever dares to take it on, it can be a difficult one to back away from. 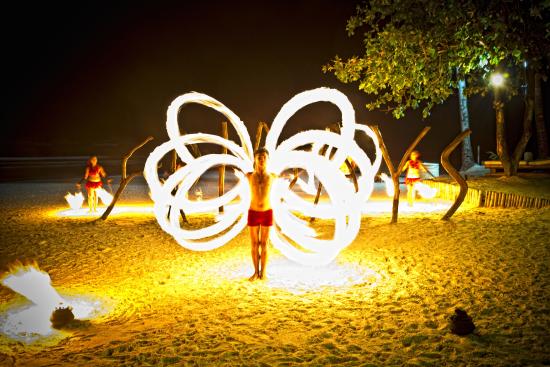 Another fiery hotspot in South East Asia is the magical island of Boracay. After a day on one of the windsurfing capitals of the world, there’s nothing better than grabbing a few cold ones and chillaxing on the beach on the front row of the fire dances.
The best beaches to go to if you’re feeling up for the show…
Boracay Beach and White Beach. Spoilt for choice.
If you’re looking to keep the festivities going beyond the evening’s fire shows, come and say hi to us at Mad Monkey Hostel Boracay. 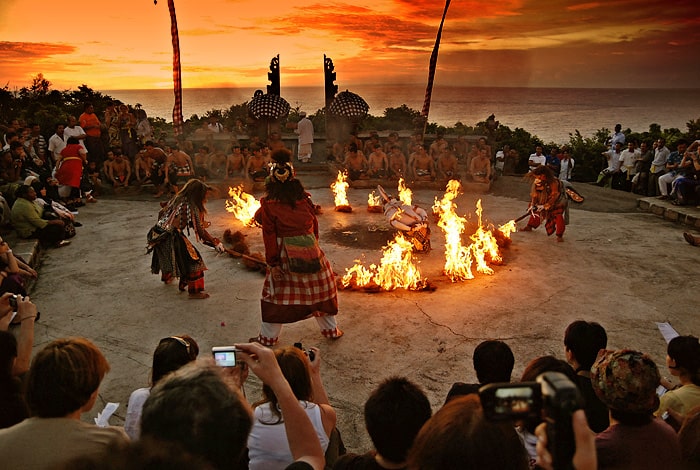 Fire dancing is also a thing of big tradition in Bali. Every night at Uluwatu Temple, a hypnotic performance is put on alongside the sunset.
The performance is called a ‘Kecak dance’. It’s centred around a traditional Balinese ritual but was originally created by a German man in the 1930s and based on the famous epic Hindu story of the Ramayana.
Then, of course, if you’re not in Southeast Asia quite yet, there a number of other mesmerising fire displays to set your sites on… 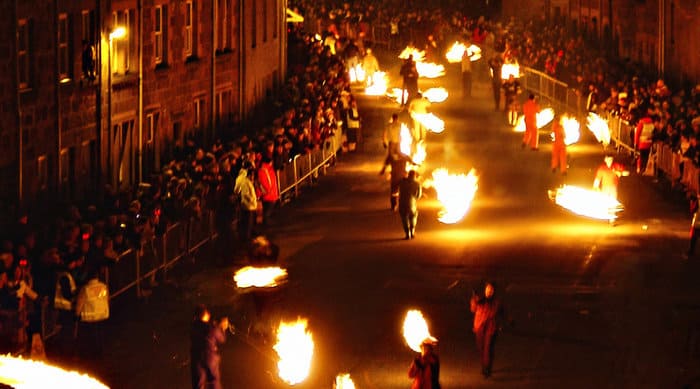 This is a hell of a way to see in the New Year. Every year on New Year’s Eve the streets of Stonehaven play host to the famous Stonehaven Fireballs Ceremony. The parade kicks off at 11pm, but be warned, this can be a popular event so make sure you arrive early for that prime time viewing spot.

Very similar to its festival cousin, Burning Man, Afrikaburn is centred around some desert fueled pyromania. Held annually during April and May, this music festival is brought to life by the magnitude of sculptures that get set ablaze amid the arid region of Tankwa Karoo National Park.
Why choose this festival over the Burning Man of the Nevada Desert…?
This festival hasn’t been overrun by tourists like Burning Man and still remains a very intimate and fiery affair.

If this piece has really got the fire in your belly going… Check out these other pieces on Mad Monkey Fire show and other fire shows around Asia! We only recommend bloggers we read often and love:

Mad Monkey Fire – How Did We Do?