Vang Vieng: The gem of Laos grows up

Article and photos by Dave Stamboulis

Most Southeast Asia backpackers are familiar with Vang Vieng. Few who pass through Laos miss the chance to enjoy a cold drink or two in Vang Vieng’s laid back riverside bars, trade travel tales, make new friends, float blissfully in an inner-tube, and realize just how sweet that gap year can be. The Vang Vieng experience (mountain, river, and jungle wrapped up into one big party scene) was home to one epic full moon party and on everyone’s bucket list until it all came crashing down a few years ago when the Lao government stepped in and put an end to the fun that had spiraled out of control. For some, that was bad news. The good news is that while the times may have changed, Vang Vieng remains just as beautiful as ever! Today Vang Vieng is just a more mature version of its former self, still worthy of a stint on any backpacker’s journey  through Laos. 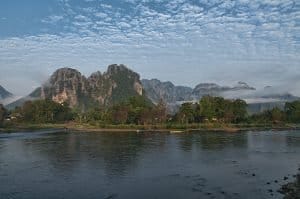 I remember the first time I came to Vang Vieng. I arrived by bicycle during a tour through Laos. This was over a decade ago, when the sleepy riverside town really was a backwoods hamlet, with a smattering of guesthouses nestled up against the Nam Song River and the most stunning limestone peak scenery this side of Krabi. There were just a handful of intrepid backpackers here then. My two day planned stay easily turned into weeks, as there were endless hidden spots to explore, and bobbing lazily down the river in a kayak or inner-tube while staring up at the jagged peaks was about the most chilled out way to spend a vacation imaginable. 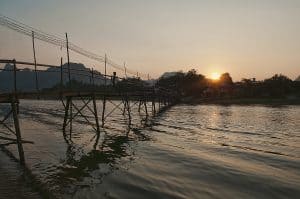 My second time back, the place was still as beautiful as ever. On my daily kayak rides along the river, though, it was a bit of a surprise to find the banks lined with bars spilling out onto the water rather than the birds and solitude that I remembered. These riverside bars were complete with rope swings, zip lines, buckets of alcohol, and of course the loud and drunken masses.

I guess it isn’t any surprise in a place where the most popular establishment was called the FU BAR (standing for ‘****ed Up Beyond All Recognition’) and a full moon party wasn’t held every four weeks but each night. Somewhere along the line the situation in Vang Vieng got out of control, and it peaked when 27 foreigners died in 2011 due to drinking, drowning, and jumping from high places into the shallow river. With hundreds of delirious half naked revelers drenched in body paint and high as a kite wandering around town, something had to give. At some point, the Lao authorities decided enough was enough and late in 2012 (after a further spate of deaths) the government gave a mandate to tear down all the river bars.

Now, in a place that’s such a cash cow of tourism, you might expect that it would have been a matter of days until a corrupt cop turned a blind eye to this official order. The good news, though, is that it has held. Even better, the result has been beneficial to visitors, locals, and local authorities alike. The riverside town of Vang Vieng has matured, and yet it’s ultimately just as enticing as before.

It’s easy to see why everyone falls in love with Vang Vieng. The town, which is really more of a village, is tiny. It never takes too many steps to get from anywhere to the river, which is the focal point of all stays. Once you’re at the Nam Song it’s kind of hard to leave. The water flows languidly past and kids smile at you as they ride their bicycles to school, over the few bridges that have been built across the water and into a backdrop of jungle-clad peaks that rise out of the early morning fog enveloping the river. 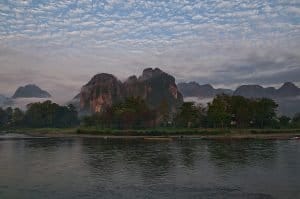 You can still go tubing now, but it’s limited to daytime hours, and all the rope swings over shallow water have been removed from the few mellow bars that are now allowed to operate (no more than three can be open at one time). The new rules and the absence of the full moon party seem to have also changed the nature of the tourism in Vang Vieng. There’s an upswing in Chinese and Korean guests, and a more well-to-do crowd (the town’s first 5-star resort opened up a year ago).

While the parties were a lot of fun, the accompanying cultural disrespect that went on was not. These days Vang Vieng’s locals are most pleased that tourists, following etiquette posters that have been put up around town, don’t walk around in bikinis or shirtless out on the main road anymore. Tourism is a two-way street, and its impact is felt even more strongly in small places (tourists would outnumber locals in Vang Vieng by at least double in high season).

Today, it’s back to the old days of Vang Vieng. Days of hopping on a bicycle or motorbike, pedaling out into the dusty backroads that snake along the the river and through the karst pinnacles, and finding deep caves to explore, waterfalls to ascend, and hidden swimming holes to spend the day at. 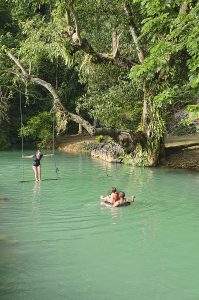 On my last visit, I pedaled out to the famed Blue Lagoon. This emerald pool was once noted for being overcrowded with inebriated hordes, but now it’s a relatively tranquil spot. Peaceful tourists enjoyed picnicking next to the clear emerald water, and there was even a rope swing that actually reaches spots deep enough to make a splash in without the risk of injury.

Just next door, a small thatch hut restaurant served fruit shakes and organic food, part of the SAE LAO Project, a sustainable tourism operation started by a Vang Vieng native trying to bring back some of the original vibe of this beautiful spot. Sengkeo Frichitthavong, better known as Bob, grew up in Vang Vieng. He moved to Canada as a teen, and was horrified to see what had happened to his home when he returned in 2008. He started SAE LAO, which now runs a volunteer English program, has an organic farm, café, and handicraft shop, and is building a small guesthouse out away from town, attracting a new breed of tourist, one that is miles removed from the beach bar mentality. 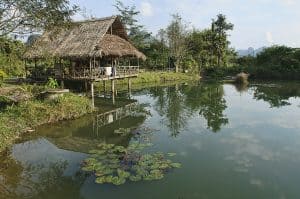 Adventure tourism has also become a big draw in Vang Vieng, with plenty of options out there for caving, kayaking, and rock climbing. Adam’s Climbing School is a great place to start if you’re interested in this. Adam, a talented Lao climber who knows his ropes and footwork, leads and teaches beginning and advanced climbing on bolted routes out on the limestone towers. Adam, whose Lao name is Sangthong, has instructed and climbed in Thailand, Germany, and France, and speaks four languages to boot. He has high hopes that the future of Vang Vieng will involve canyoning, bungee jumping, and sky diving.

Kayaking remains one of Vang Vieng’s best activity options. There are now plenty of budget tours that take visitors up the Nam Song. The tours start out with a trip to the Water Cave, where you hold a rope and pull yourself up a dark underground river for half a kilometre, then you hop in your boat and mostly float all the way back down to Vang Vieng. You can also do longer trips heading south of town, dependent on the season and water levels. Green Discovery Tours (Vang Vieng’s big eco tour operator) and Wonderful Tours run trips out to hidden mountain spots followed by exhilarating paddling down the river. These can be quite adrenaline-pumping during the rainy season, when water levels are high! 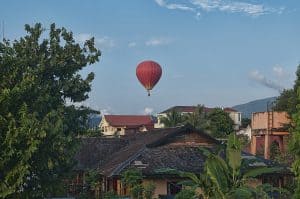 Hot air ballooning has also come to Vang Vieng as of recent, with dawn flights giving amazing bird’s-eye views of the karst mountain topography that stretches for miles in every direction. Soaring above the crowds isn’t exactly on most budget travelers’ hit lists, but even those who watch their wallets will shell out for the occasional splurge if the reward is great enough. One look at the glowing faces back on the ground of those who’ve just watched the sun rise above some of Asia’s most spellbinding mountain scenery says the reward here must be pretty ample. 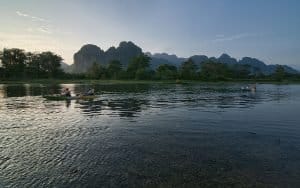 There is still plenty of fun to be had in Vang Vieng, and it isn’t like the town has gone Mormon or teetotaller. The infamous Sakura Bar is still around, still serving free booze until 9pm, and still full of young travelers from around the globe. Gary’s Irish Bar also survived the crackdown, and is home to cold pints of Guinness and large servings of fish and chips for those who’ve had one too many plates of tam mak heu spicy papaya salad and khao niaow sticky rice. Yet at midnight the plug gets pulled from the jukebox, the taps are closed, and folks go back to their guesthouses to get a good night’s sleep. And so they should, when the following morning will bring plenty more river and mountain exploration in one of Southeast Asia’s most magical spots. 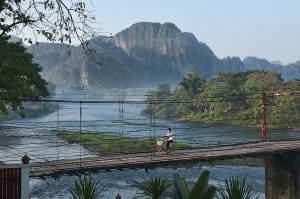 As I walked down the street on my last visit, on a quiet Friday morning, I was struck by the number of new boutique style resorts and fancier, family-style restaurants that had sprung up in Vang Vieng. I was also surprised by the large number of Lao families that had come up for the weekend from Vientiane. Vientiane’s middle class is growing, as is the older expat crowd, and both are now making Vang Vieng their number one weekend escape. This creates a demand for more restaurants, accommodations, and services. Usually, the development of a travel destination into a higher-end market spells its end. In the case of Vang Vieng, though, everyone is welcome. Vang Vieng’s evolution is more like the case of a troubled teen finally maturing and coming of age, and it is a pleasure to see Laos’ gem growing up. 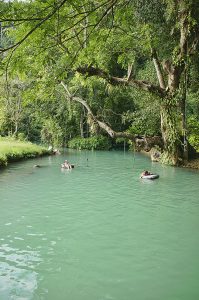 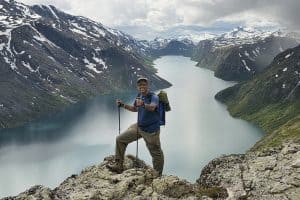 Dave Stamboulis is an American travel writer and professional photographer who has called Thailand home for over a decade. He is the author of Odysseus’ Last Stand, which detailed his seven year and 45,000 kilometer bicycle trip around the world, and won the silver medal for Travel Book of the Year from the Society of American Travel Writers, Dave is also the updating writer for Fodor’s Guidebook to Thailand and Laos, as well as the Bangkok “expert” for USA Today. His stories and photos have appeared in publications around the globe such as the BBC, Lonely Planet, The Rough Guides, Asian Geographic, The Guardian, Wanderlust, Get Lost magazine, and countless other publications across the Southeast Asia region. A passionate trekker, mountaineer, and lover of indigenous mountain communities around the world, Dave can be found drinking craft beer and looking for hole in the wall ethnic eats when he isn’t on the road.