Make a difference this #WorldWaterDay

Leaving No One Behind

Leave no one behind this #WorldWaterDay by making a donation to the Clean Water Project run by the Cambodian Buddhism Association for Vulnerable Children (CBAVC). It has provided over 300 water wells to poor communities in the Siem Reap province. The cost of one well is $330, and with your help, we can build another well to provide clean water to communities in Cambodia.

It’s a scalding hot day, and there is likely only one thing to help you beat the heat — an ice-cold glass of water. For many of us, getting a glass of clean water is as easy as finding the nearest refrigerator. For this reason, it may be almost impossible to imagine having to walk up to three kilometers for a glass of water — sadly, this is a reality for many Cambodians.

Luckily, one man is trying to change all of this.

San Van grew up in the Bak Angrut Village, a rural community in the Siem Reap Province. His childhood was anything but easy. His parents struggled to support their family, including San Van and his nine siblings as farmers. They were also dealing with the aftermath of a bloody civil war spearheaded by Pol Pot, the leader of the Khmer Rouge. After six years in primary school, San Van was forced to drop out because his parents simply couldn’t afford to send him. He started working in the rice fields.

In lieu of education, San Van found himself many of nights using his finger as a pencil and writing down some of the words in the sand that he remembered studying in school. This was a reality that San Van did not want for future generations, so he started the Cambodian Buddhism Association for Vulnerable Children (CBAVC).

The Need for Clean Water

Most of San Van’s community lives in poverty — access to education and health services are limited, and every day seems to be a struggle for many.

“Too often, children are forced to drop out of primary school to work in rice fields to support their families,” San Van said. “Even then, such local families struggle to feed their children.”

San Van was all too familiar with this cycle, but he realized that one of the ways to break it was to provide education; that is where the Cambodian Buddhism Association for Vulnerable Children comes in. Every week, this non-profit organization teaches 350 children for eight hours a day, five days a week. In addition, CBAVC serves 1,750 meals a week and employs six local education staff through their educational programs.

“My passion is helping vulnerable children and disabled people in my village so they can have a better future,” San Van said. “With our work, we proudly help many students through primary and secondary school; allowing them to create hopes and dreams for a brighter future.”

CBAVC was created in 2012 by San Van and five other volunteer Cambodian Buddhist monks of Wat Polangka. Since it was created, CBAVC has proven itself as a meaningful charity that is greatly needed in the communities in which it operates in.

One of CBAVC’s largest projects is their Clean Water Well Project. Since it started, the organization has built 325 wells that supply clean drinking water and water for farming to 3,240 families in 28 villages. Along with their sponsors, they’ve helped about 13,500 people in the Chi Kreng District of Siem Reap. He guesses that about 500 more wells are needed to help more local families, businesses, and more.

“Today, I can proudly say that we are living our mission and changing lives, but there is still so much more to do,” San Van said. “With further philanthropic support, CBAVC will continue to build schools, offices and school kitchens while also facilitating cow raising projects for rural families.”

Ten years ago, nothing like the Cambodian Buddhism Association for Vulnerable Children existed in Siem Reap. Today, this organization has built over 300 wells for poor communities in the province. The organization is one of San Van’s greatest achievements, and he hopes that CBAVC will continue to break the cycle of poverty that he had to endure.

“We currently have the need to support 100 more children each week; which would increase our current student numbers from 250 to 350,” San Van said. “Without donations from our invaluable supporters, like Mad Monkey Hostels, CBAVC is not able to provide care and education to this community living in deep poverty.”

Looking towards the future, San Van plans to build 50 more water wells and 20 toilet blocks in 2019. One well alone will supply water for at least 5-10 families, which is about 45 people, in a village. Over the past six years, Mad Monkey Hostels has contributed 239 wells to CBAVC with the help of guests and donors. This water has not only been used for drinking but also to help facilitate farming for 10,755 people within 20 villages.

“We are very hopeful about further fundraising via Mad Monkey so that we can help more families in need,” San Van said. “We need at least 500 more water wells in rural areas.”

He also hopes to build a new office for CBAVC in Siem Reap. It will help their team better coordinate development projects, thus allowing them to have a broader reach for those communities that are in need. For more information about donating, please visit their website. 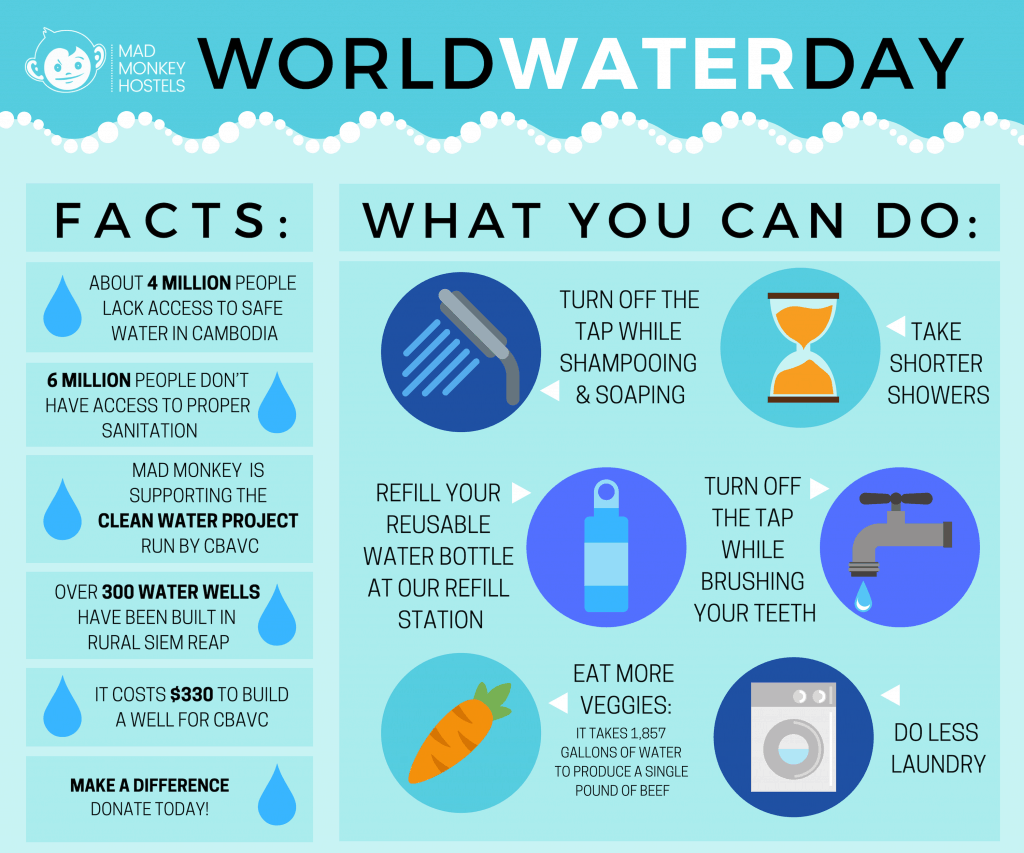