Your guide to buses from Bangkok major backpacker destinations.

Bangkok is undoubtedly one of the most popular Southeast Asian destinations. With the city’s wonderful tropical climate and distinct Asian vibe, no doubt you wouldn’t want to miss out on anything in this exotic city.
Albeit plenty of transportation options that the city provides, a bus ride never goes out of the list. Here is a guide on Bangkok’s buses to various destinations—the cost and some tips on what expect.

The Bangkok to Siem Reap direct bus is the best option. And if you’re carrying around plenty of stuff with you, the more you’ll appreciate the direct bus—primarily because you don’t have to switch buses carrying your heavy load.
Transport Co., Ltd is the one that handles the tickets for the Bangkok-Siem Reap direct bus. The bus ticket costs 750 baht and can be purchased at the Mo Chit 2 Bus Terminal, also known as the Chatuchak Bus Terminal.
You can also get your ticket via online. Of course, you have to pay a little extra for this convenient way, but it’s worth it. One hour before your scheduled departure, get the ticket at the bus office.
The Bangkok-Siem Reap bus leaves daily at 8 and 9 in the morning, and the journey takes 9 hours on average. So stock up on snacks, which you can get at the nearby 7.eleven convenience store near the Mochit Station.

Pattaya, known for its infamous nightlife scene, is a coastal town on Thailand’s eastern Gulf coast. Most people leaving Bangkok to get to Pattaya take the bus, as it is the most practical option.
The most popular departure terminal is at the Eastern Bus Terminal, which is adjacent to the Ekkamai BTS Station on Sukhumvit Road at Soi 63 (Soi Ekkamai). The air-conditioned buses depart approximately every 30 minutes between 05:20 and 23:20 each day and the ticket costs B117.
You can also take the bus from the Northern Bus Terminal (Mochit) between 05:30 and 20:00, daily. The fare is the same—B117.
If you happen to be in close proximity to the Southern Bus Terminal (Sai Tai Mai), pick any of these departure schedules: 05:30, 08:30, 10:00, 12:00, 14:00, 16:00 and 18:30.
If you’re coming from the Khaon San Road area, then it’s just very convenient and easy to get to this terminal: just take the 511 bus on Rachdamnoen Road headed across the river and get off at the end of the course.
It takes about 2 hours when you journey to Pattaya, but it really depends on the traffic. You have the option of taking a minivan, which is offered by Bangkok travel agencies and hotels in Bangkok, specifically in the Khao San Road area. This usually costs B400/pax. You might want to consider this option if you desire to be picked up at your place of accommodation and directly taken to your destination in Pattaya.
If you prefer a cheaper bus fare, you can take a second-class air-con bus—you’ll be able to save B20. The catch? The journey takes longer. 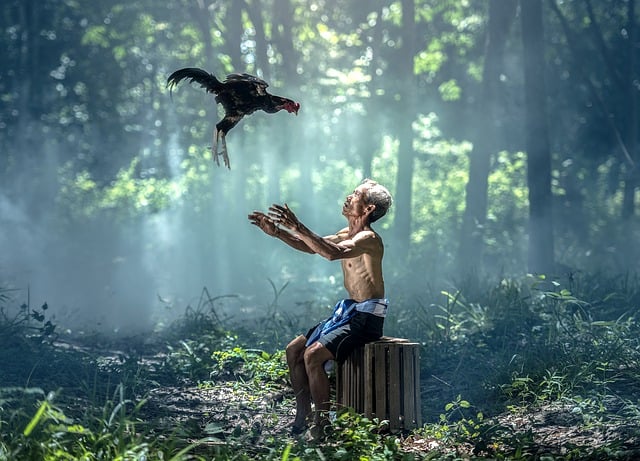 Travelling from Bangkok to Phuket provides a wider selection of bus transportation. Also, there are over 20 buses daily that leave Bangkok to Phuket. These buses normally depart from the Southern Bus Terminal, and the journey takes approximately 12 to 14 hours. Backpackers usually take the bus directly from Khao San Road, preferring the popular overnight bus service.
It is highly recommended that you only take the VIP buses—unless you can tolerate an inferior bus and a long journey filled with frustrating stops. Remember, for a trip this long—12 to 14 hours—comfort is important. VIP buses cost less than B1000, sold by both private companies (there are about half a dozen) and the government.
It is also wiser to book in advance, as Bangkok-Phuket buses, most especially the non-air-conditioned ones, get crowded to standing room—especially during the holidays, such as the Songkram.
Also, because of the long-distance travel, the buses operate like an airline, with a hostess serving snacks and drinks. The first class ones have toilets (which costs around B974). There are one or two rest stops throughout the journey, so if you find yourself in a second-class bus with no toilets on board, it’s not such a big deal.
It is also good to bring a jacket or sweater with you, as you will freeze from the super cold air-con bus. The bus service also has a video on board, but usually, the movies are in Thai language. 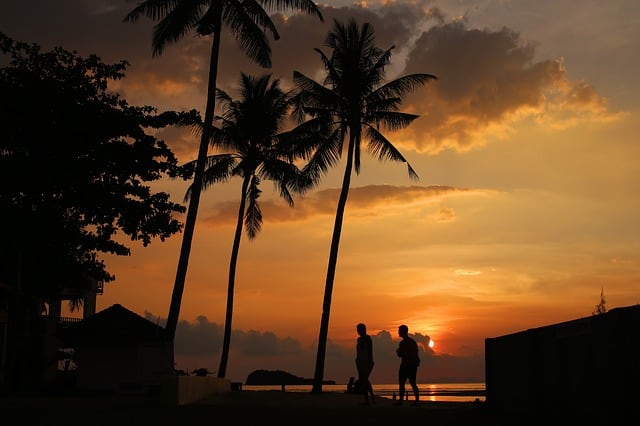 The coastal province of Krabi is located on the West coast of Southern Thailand, drawing in a lot of tourists because of the exquisite beaches and the awesome rock limestone rock formations that grace the place. Getting there from Bangkok takes about 11 hours by bus.
From Bangkok, take the bus to Krabi from Sai Mai Tai, the Southern Bus Terminal. To get to the bus terminal, you have to take a taxi to Phutthamonthon Sai Road, in the Thonburi district—found on the western side of the Chao Phraya river. Once you arrive at the Krabi Bus Terminal near Talat Kao (4km from Krabi), or at Nuea Khlong (15km from Krabi), you will have to organize your own trip to the islands, but they’re easy and hassle-free.
From Bangkok to Krabi, you might want to take the 24-hour Lignite bus service, reputed to be one of the most professional bus transports. The bus company also conveniently offers return transport from Krabi to Bangkok.
Their buses depart from the Southern Bangkok Bus Terminal, Krabi’s Talad Kao bus terminal and Phang Nga bus terminal every day. Taking the night bus is more advisable since it’s more convenient. Buses depart at 5.30pm, 7.10pm (2 buses), 7.20pm, 7.50pm (2 buses) and 8.40pm.
A Lignite express bus ticket from Bangkok to Krabi costs B648, and if you prefer the VIP bus, it will cost you B970. But all types of buses are air-conditioned, serving snacks and blankets, and makes convenient pit stops in areas with toilets, cafes, and restaurants. 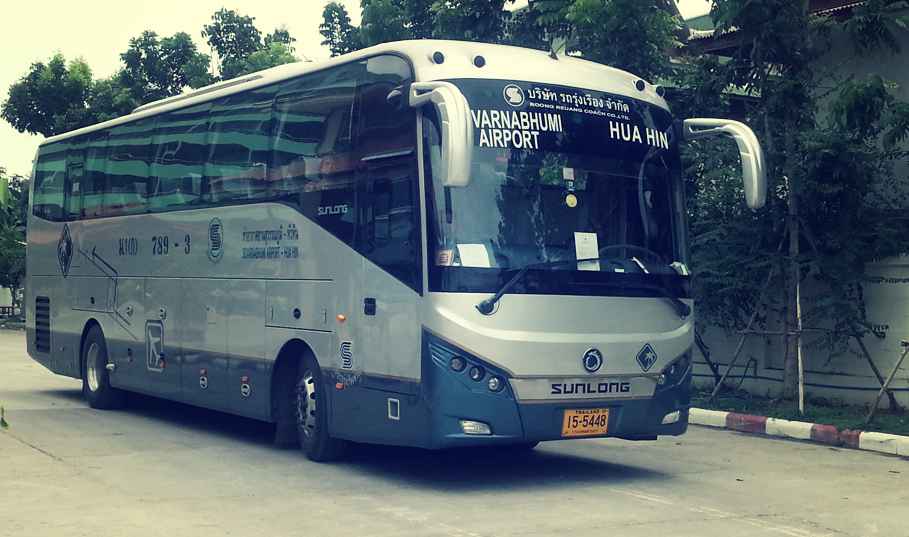 If you’re coming from Bangkok’s Suvarnabhumi Airport, there is a direct bus that will take you to Hua Hin, this picturesque seaside resort on the Gulf of Thailand. The bus service is courtesy of the Airport Hua Hin bus, a luxurious 24-seater bus that operates daily. The bus journey takes approximately 3.5 hours.
Buses leave Suvarnabhumi Airport at 07:00, 09:00, 12:00, 14:00, 16:00 and 18:00, and costs B305 baht. From the transport centre at Suvarnabhumi, buses are scheduled to leave for Hua Hin at 07:30, 09:30, 13:30, 16:30 and 18:30.
Hua Hin Pran Tour also offers bus services from Bangkok to Hua Hin. All their buses are air-conditioned, so the 3-hour journey to Hua Hin will be comfortably cool. Pran Tour buses depart from the Southern Bus Terminal, or Sai Tai Mai, every 30 minutes beginning at 5 in the morning until 10 in the evening.

The Mochit Bus Terminal (or known as the Northern Bus Terminal) in Bangkok can take you to all your destinations in the North, North-East, a few to South, and Central Thailand—even to the neighbouring countries of Cambodia and Laos. No wonder it’s the largest and busiest bus terminal in the whole of Thailand. This terminal is also sometimes known as the “Mochit Songg” (Mochit 2) or “Mochit Maii” (New Mochit). The bus terminal has 59 counters, a large waiting area, and a food court.
To get there, you can take the subway, or MRT, and arrive at the Chatuchak Park Station. If you’re taking the BTS Skytrain, just get off the Mochit BTS station. Or you can just take the taxi directly to the terminal.
The Mochit Bus Terminal is located across the Thon Buri river, in the Chatuchak District. The bus fare ranges between B270 and B900+, depending of course on the distance. One of the longest trips that Mo Chit services are to Sungai-Kolok—a 13-hour trip to Chiang San, Chiang Khong, Tha Ton.
There are plenty of bus companies operating in Mochit, both government (“Baaw-Khaaw-Saaw”) and private bus companies.

Helpful articles and blog posts on Bangkok buses, and guide to this popular public transport in Thailand:

We only recommend writers and blogs that we read regularly and believe will deliver substantial value to our readers. The following is our top picks of articles we think are worth reading for you to get an overview, or detailed experiences, of travellers who experienced travelling by bus in Thailand:

And the weather is a concern, of course, when you are travelling. Need an overview of Bangkok’s weather all year round? Check out Bangkok Weather – Guide to Bangkok’s Seasons.
Do you have an awesome link to a relevant well-written article that should be included here? If so, hit us up on Twitter by following and messaging us the link. Looking for the best budget stays in Bangkok? Check out our guide to Bangkok for further information.