What’s that little rumbling you can hear buzzing around in the distance? No, it’s not the pumping speakers of the Sihanoukville nightlife scene, it’s your stomach telling you it’s time to chow down. Luckily, the restaurants in Sihanoukville are at your beck and call.
We can’t have you heading off into the madness of the night on an empty stomach, and we don’t want you filling your stomach with overpriced and poor quality munchies.
Luckily, Sihanoukville is famous for its South Asian Khmer cuisine and is largely renowned for being top notch quality and cheap as Donald Trump’s winter toupée. Result!
We’re getting seriously hungry…
It’s no surprise that a town on the southern coast of Cambodia specialises in South Asian Khmer cuisine (it’s sensational). What’s more, there’s recently been an increasing introduction of international foodie pop-ups that you’d be gutted to miss out on.
Decisions, decisions, decisions. Petey Griffin knows the struggle is real…

While Mr Griffin is still deciding whether to make it an extra large meal, it’s about time we sorted you out with the full menu of the best restaurants in Sihanoukville.
All of these restaurants are very reasonably priced and won’t even come close to ransacking the backpacking budget purse strings.
Strap on a feedbag lads and ladettes, we’re jumping in the the edible portal of Sihanoukville…

Golden Lion Roundabout & Serendipity Beach Road, Sihanoukville, Cambodia
Konnichiwa! An unexpected and delicious little slice of Tokyo, slap bang in the middle of Sihanoukville. Ryoma prides itself and its Japanese ancestors on cheffing up some of the most tummy-tantalising ‘Japanese yatai foods’ this side of the South China Sea.
Cheap and cheerful…
Whether you want a lite bite, or a hearty bowl of ramen; neither will be hustling your bank account. The food is very reasonably priced and goes hand in hand with the $0.50 happy hour beerios.
Authentic atmosphere…
Nothing like a cheeky bit of authenticity to take a restaurant experience to the next level. With Japanese lanterns and symbols adorning the wooden decked terrace, Ryoma does exactly that.
We recommend trying the okonomiyaki, Japan’s answer to a weird fusion of pizza and pancakes. The kimchi is sending munchers into euphoric raptures as well.
So good they built it twice…
There are actually two Ryoma restaurants in Sihanoukville. One is chilling on Serendipity Beach Road and the bigger one is right on Golden Lions Roundabout.

Krong Preah Sihanouk, Cambodia – VIEW MAP
There’s nothing like slapping some meat between two buns every once in a while…
London’s got Gourmet Burger Kitchen, New York’s got Shake Shack, Melbourne’s got Hungry Jacks, and Sihanoukville now has Mike’s Burger House!
Having been hugely successful in Phnom Penh, Mike has built a new burger banger in Sihanoukville. Inspired by the juicy In-N-Out Burgers of California, Mike Im’s famous establishment is grilling up a storm.
Cambodian born Mike spent 30 years in California after the collapse of the Khmer Rouge regime and utilised his time perfecting the ultimate burger recipe to bring back to his homeland.
Flip ’em and dip ’em. 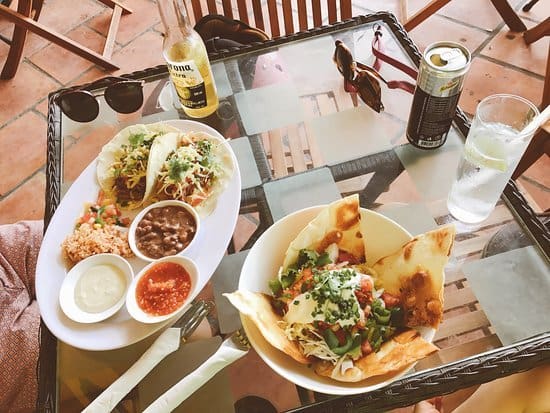 Ay caramba!
Stick on your bandit style moustache and adorn the multi-coloured sombrero, there’s a Mexican fiesta going down at Maybe Later.
A very humble choice of name, as there should be no ‘maybe’ or no ‘later’ factored into your hungry decision making. Head over to Maybe Later right this second if you’re feeling like a taste of Mexico.
This sizzling shindig is located right at the bottom of Serendipity Beach Road, and is whipping up all sorts of spicy treats.
You name it, they got it…
Tacos, burritos, quesadillas, nachos, taco salads, the works. We are sticklers for the beef barbacoa burrito, grade A munchies.
This Mexican jam doubles up as a cocktail bar, and of course is spinning out some punchy margaritas to wash down the grub with. 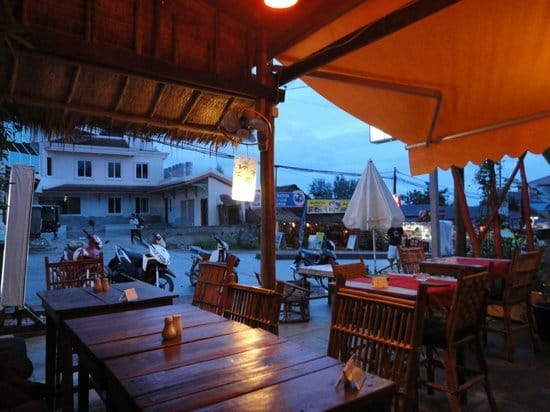 Mamma mia!
Located slightly further up Serendipity Beach Road from Maybe Later is this little slice of Italian heaven. Cafe Mango brings out the munchies that Italian grandmothers all over Europe pride themselves on.
Rome certainly wasn’t built in a day, but your appetite can be seriously satisfied in a much shorter time. You should be popping in to check out their generous menu of the day deal; it includes a starter, main, and a drink, all for $5.50.
The Italian stallions in Cafe Mango’s kitchen will be providing you with scintillating spaghetti, luscious linguine, gorgeous gnocchi, tantalising tagliatelle, or pristine pizzas. How’s that for a strong alliteration game… 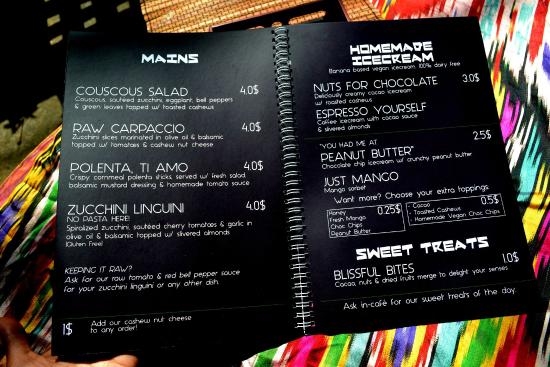 So Sihanoukville, how about we hook you up with some vegan delights to satisfy your tree hugging tummies…
Dao Of Life is one of the few fully vegan restaurants in Sihanoukville and Cambodia. The green machines that run this joint pride themselves on the unstoppable energy and passion that drives this eco-vegan food fantasy.
The seaside plot is dressed in Chinese lanterns and only uses recycled furniture. Right on!
Their vibe goes hand in hand with the hippie vegan movement. Dao Of Life regularly hosts creative art workshops on their rooftop and is a great spot to chill with live music in the evenings.
Food of choice…
For all y’all vegans out there, we’d recommend the veggie burger. It’s made with saucy sweet potatoes and kindred kidney beans. The falafel is pretty special too! 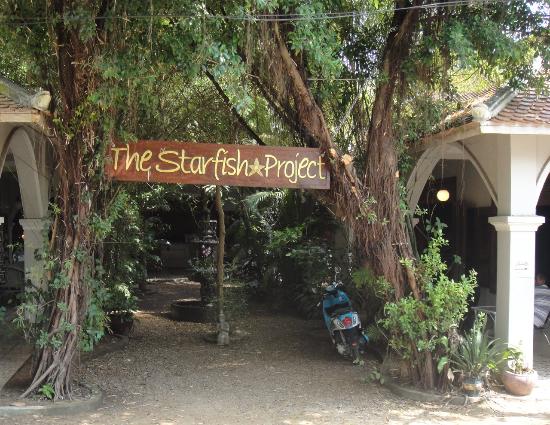 It’s crucial to kick off the day on the right edible foot. That’s what Starfish Bakery are here for. Absolute stars!
Good munchies and good karma…
Starfish Bakery was brought into the foodiverse as a non-profit organisation that is focusing on supporting the Cambodian people.
They take great pride in their commitment to sustainability, and are offering local aid with water, sanitation, and healthcare.
Not only are the vibes on point, their menu of breakfast beddazlements is as well. You’ll be taking a hit on the proverbial caffeine bong with their outstanding cups of coffee, and then following that up with some fresh fruit platters and banging baked goods.

Krong Preah Sihanouk, Cambodia – VIEW MAP
If you’re looking to take your stomach diving with the fishies, the Treasure Island seafood Sihanoukville experience is the one for you.
Billy Bones and Jim Hawkins spent decades hunting the buried edible treasure during the mid 1700s in Robert Louis Stevenson’s bestselling novel. Little did they know it had washed ashore on the banks of Sihanoukville.
Being treasure, it’s of course well hidden and located a little way out of the main Sihanoukville restaurant action. However, the edible treats that are awaiting you are well worth the adventure.
The catches of the day are delivered straight to Treasure Island by the local fisherman, before being jazzed up into Hong Kong style seafood sensations.
What’s more…
This restaurant comes fit with it’s own private beach, the perfect place to enjoy the sunset!

19 Mithona Street, Kâmpóng Saôm, Cambodia – VIEW MAP
Given we are in Cambodia, it would be incredibly rude of us not to hook you up with the best Khmer restaurant in town.
Last, but by no mean least…
Five Men Fresh Beer!
We’ve chose FMFB, not only because it’s dishing up some seriously good Cambodian delicacies, but also because of it’s huge beer hall that. All the beer is brewed freshly on site and will add a necessary waveyness to your evening’s proceedings.
The menu is packed full of typical Cambodian BBQ-style munchies, which are incredibly cheap (mains usually costing no more than $3.75). Plenty of room in the wallet to sample their oh-so-fine selection of golden nectars.
What to order…
The sweet chargrilled ribs are making us salivate just writing those 3 words, and if you’re feeling a bit more of a cleanse, the spicy mango salad goes down a treat.
Five men fresh beer indeed!

More Articles On Restaurants In Sihanoukville

If our list has whet your appetite and you’re hungry for more, check out these pieces on the best restaurants in Sihanoukville! We only recommend bloggers we ready often and love:

Heading off into the night? Be sure to check out our ‘Sihanoukville Nightlife‘ piece to make sure you don’t miss out on the best parties in town!
Moving on from Sihanoukville? It’s about time you took yourself offshore to the island paradise of Koh Rong Samloem – DISCOVER THE MAGIC RIGHT HERE!