Article from a Mad Monkey Customer
It must be said that Phnom Penh is not the most agreeable city for walking. Picture grand, tree-lined boulevards with a turbulent river of traffic. Picture narrow, picturesque alleys where at any moment you’re likely to get run over by a moto darting out of nowhere.
My stay at The Mad Monkey Hostel had introduced me to the city and now with my new apartment and job ready to go, I felt truly ready to go out on my own and procure my own transport.
Any stroll through town is not only sweaty in the heat, but an obstacle course of weaving around cars and motos parked on the sidewalk, shifty storm drain covers, broken concrete, and detours into the busy street. Not to mention the drivers who yell “LADY, TUK TUK? TUK TUK! LADY! LADY, TUK TUK!” at you at every corner.
This makes other options for getting around town preferable. Tuk Tuks and motos are ubiquitous, although you had better know where you’re going and how to get there.
In my early days I took more than a few trips where the driver wound up circling the same area for 15 minutes before I realized we were both lost. Once you get sorted in town they are still quite convenient but taking them frequently can add up.
The next idea that pops into your head, of course, is to get around on your own with a scooter or motorcycle. A natural thought, being both the most awesome and most dangerous way to get around. I worried, however, about gas, needing a mechanic, getting stopped by the traffic police and getting run over by a marauding Lexus…

I’ve opted, instead, to buy a regular old bicycle. If you head to the O Russei Market, there’s a street nearby with a lot of shops selling bikes both used and new. (If you prefer to rent, many guesthouses would be happy to assist you.)
I selected a used Japanese-made frame instead of a new Khmer-built bike for two reasons: quality, and I don’t fancy riding around with Hello Kitty all day.
The only bike tall enough for me cost $5 more than the other bikes, not because it was taller, but because the handlebars were “different.” Can I switch the handlebars (to the cheaper kind)? I asked. Nope.
Instead, I swapped for better parts from other bikes (brake pads, handle bar grip, chain, pedals, gear shifter, etc.) and got a new front tire ($2 extra). Now Frankenbike is mine, a spray-painted-to-look-new silver frame with a basket, light, and frame on the back for a passenger. 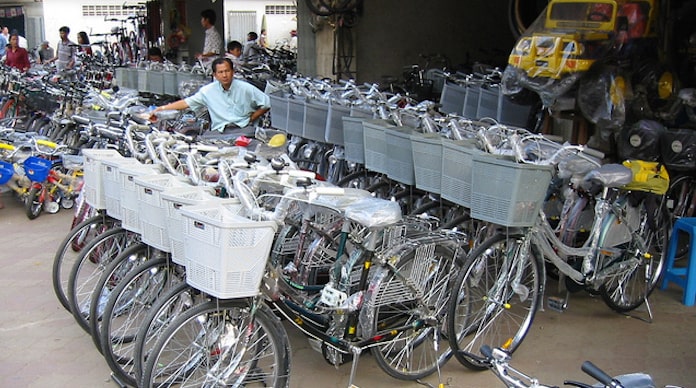 We’ve had some good times together already: grocery shopping, going to restaurants and bars, and just generally exploring. One day I took several hours to make a determined exploration of Phnom Penh. It was amazing.
I rode up to Wat Phnom and enjoyed circling around its leafy grounds until I started to get stares (and a little dizzy). I went on a mission to find the train station, and to go by the Old Stadium and Japanese Friendship Bridge. I found the American Embassy, the French Embassy, giant government ministry buildings of Angkorian proportions, and some of the new, gleaming sky scrapers going up. I circled the Central and O Russei Markets, hunting for snacks, and cruised down crowded side streets full of shops.

I could give you an exact route, but the fun is in finding your own. Grab a bike and go explore.
Everything goes by faster on a moto, which is why I relish biking here. Jostle with the tuk tuks and motodops at intersections, cruise with the fruit and bread sellers past the sidewalk stands, and face down your four-wheeled counterparts in the traffic circles. I definitely am not going to be scared of biking at home after this.
Only one puzzle remains: I just can’t figure out why tuk tuk drivers still solicit “Tuk tuk? Lady Tuk tuk!” at me when I ride past on my bike.