The Grand Palace Bangkok – A guide for backpackers

The Grand Palace Bangkok: The Highlights.

Nestled at the heart of Bangkok, on the banks of the Chao Phraya River, lies one of the city’s greatest attractions: The Grand Palace Bangkok.
This dazzling landmark, located at Na Phra Lan Road in the Old City, is a complex of buildings and was the official residence of the kings of Siam (later Thailand) from 1782 to 1925. Today, the Grand Palace is still used for annual state functions, royal ceremonies, and other official events—and, of course, as a tourist attraction.
Within its walls are temples, palaces, chapels, pavilions, halls, open lawns, and courtyards. The Grand Palace is also the site of the revered Emerald Buddha, which is housed in one of the temples inside, the Wat Phra Kaew—deemed as the most sacred Buddhist temple in the whole of Thailand.

The sprawling and majestic 22-acre (2,351,000 sq ft) rectangular complex is surrounded by a wall 1.9 kilometres in length, with 12 gates and 17 forts.
Architecture inspired by Ayutthaya (the ancient capital of Thailand), the Grand Palace is teeming with glorious and distinct stupas, prang, chedis, traditional Thai pointed roofs, intricate carvings, and sculptures, and some European and Renaissance structures. The Palace’s free, diverse and asymmetrical look is due to the many developments the various kings have made during each of their reigns.
The Grand Palace is divided into three major areas: 1) The Outdoor Court, comprised of public buildings, royal offices, and the Temple of the Emerald Buddha, 2) the Middle Court, where the residential and stated buildings are located, and 3) the Inner Court, an exclusive zone restricted to the king, the queen, and the royal consorts. 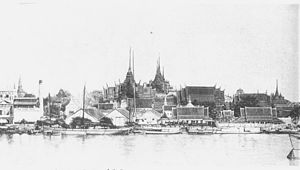 The Grand Palace was constructed on May 6, 1782, by the order of King Rama I, who was adamant in erecting a capital city for his new Chakri Dynasty, as well as building a royal residence. This was after he seized the throne from King Taksin of Thonburi.
King Rama’s new capital city was transformed into an artificial island and was called “Rattanakosin.” The Palace was originally built entirely of wood and the buildings were surrounded by an unadorned log palisade.
The succeeding kings naturally rebuilt, reinvented, and modified the Palace until it became what it is today. The layout, however, was patterned after the Royal Palace of ancient Ayutthaya, which was also situated near the river.

THE HIGHLIGHTS IN EACH OF THE THREE AREAS 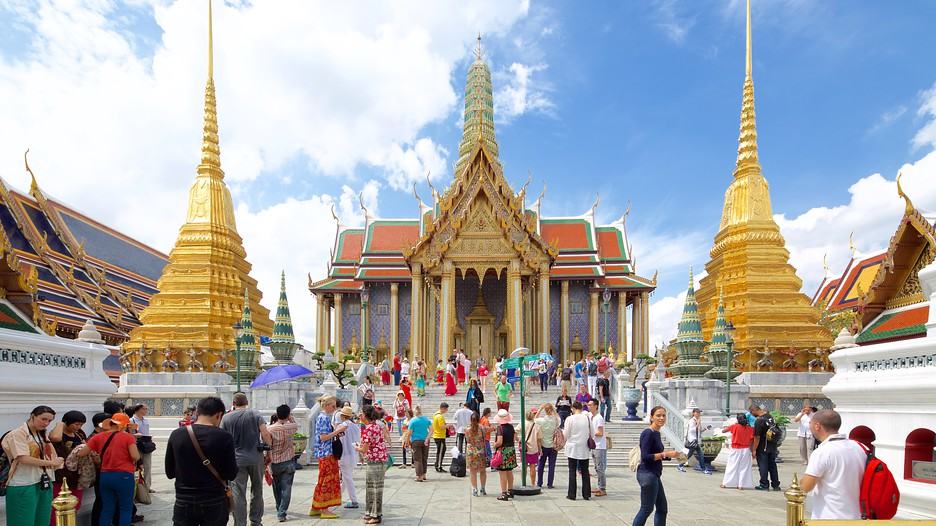 Here is where you’ll find the Temple of the Emerald Buddha, or Wat Phra Kaew, which is regarded as the most sacred wat in Thailand. The deeply venerated Emerald Buddha inside is believed to be the protector of Thailand. Legend has it that the Emerald Buddha originated in India, but historical records say it originated in 15th-century Chiang Rai. The Emerald Buddha, made not of emerald but of jade or jasper, is seated in a yogic position. It is clothed in gold and is 66-centimetres tall.
The Outer Court is also the location of the Grand Palace’s headquarters and information center, plus the Office of His Majesty’s Principal Private Secretary, the Sala Sahathai Samakhom (used for meetings and receptions), and the Sala Luk Khun Nai, which houses several departments of the Royal Household. There’s also a museum, called the Pavilion of Regalia, Royal Decorations and Coins. 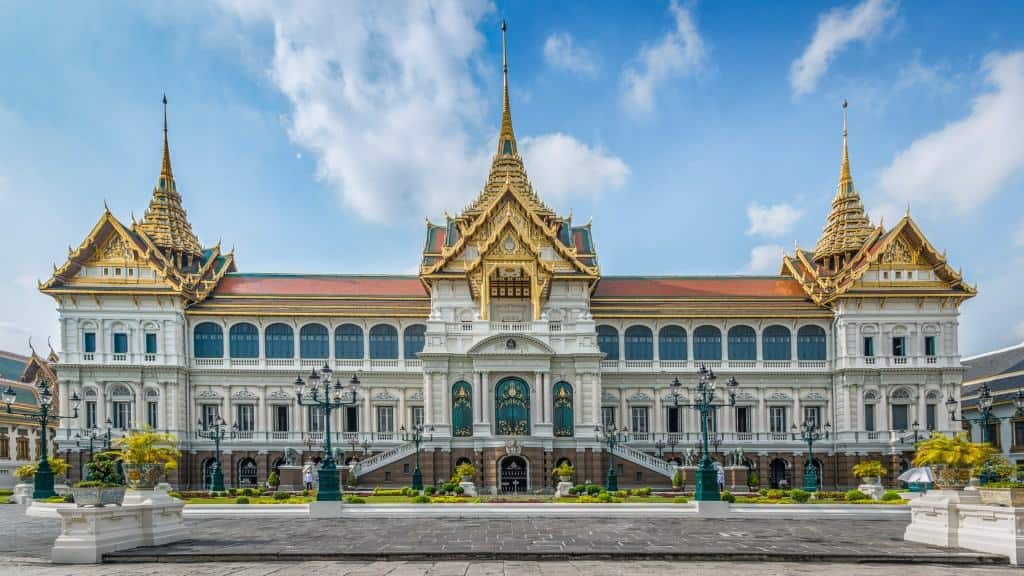 Also called the Khet Phra Racha Than Chan Klang, the Middle Court is the largest—and the most important court in the Grand Palace. Located at the heart of the Grand Palace, it is where most important state and residential structures are found.
The Middle Court is split into three groups of “Throne Halls”: the Phra Maha Monthien Group, Phra Maha Monthien Group, and the Phra Maha Prasat Group.

Also called the Khet Phra Racha Than Chan Nai, the Inner Court fill the southernmost area of the Grand Palace and is exclusively reserved for the use of the king, his queen, and consorts (or minor wives). The king’s children, ladies-in-waiting, and the servants, also resided in the Inner Court.

MUSEUM OF THE EMERALD BUDDHA

Located between the Outer and Middle Court is the two-storied museum—Renaissance styled, with four columns in the portico. The museum holds a wide selection of artifacts, precious objects, two architectural models of the Grand Palace, Chinese statues, bones of white elephants, figurines from Thai literature, commemorative coins, Buddha images, and more fascinating historical elements.
Other highlights in the museum are the small mother-of-pearl seating platform and the Emerald Buddha’s seasonal robes.

HOW TO GET TO THE GRAND PALACE—PLUS TOUR DETAILS

DIRECTIONS: Just take the BTS Skytrain to Saphan Taksin Station. From there, take the Chao Phraya River Express boat to Chang Pier, then take a short walk to the Grand Palace’s main entrance.
SCHEDULE: The Grand Palace is open daily from 8:30 in the morning until 3:30 in the afternoon.
ENTRANCE FEE: 500 baht, which will give you access to Wat Phra Kaew, The Royal Thai Decorations & Coins Pavilion, Queen Sirikit Museum of Textile, and Vimanmek Mansion Museum.
Note: If you wish to rent a personal audio guide—English, French, German, Spanish, Russian, Japanese or Mandarin—you have to pay an additional 100 baht.

Please always be respectful and appropriate as you are entering one of the holiest places in Bangkok you should observe the dress code. The following are not allowed: 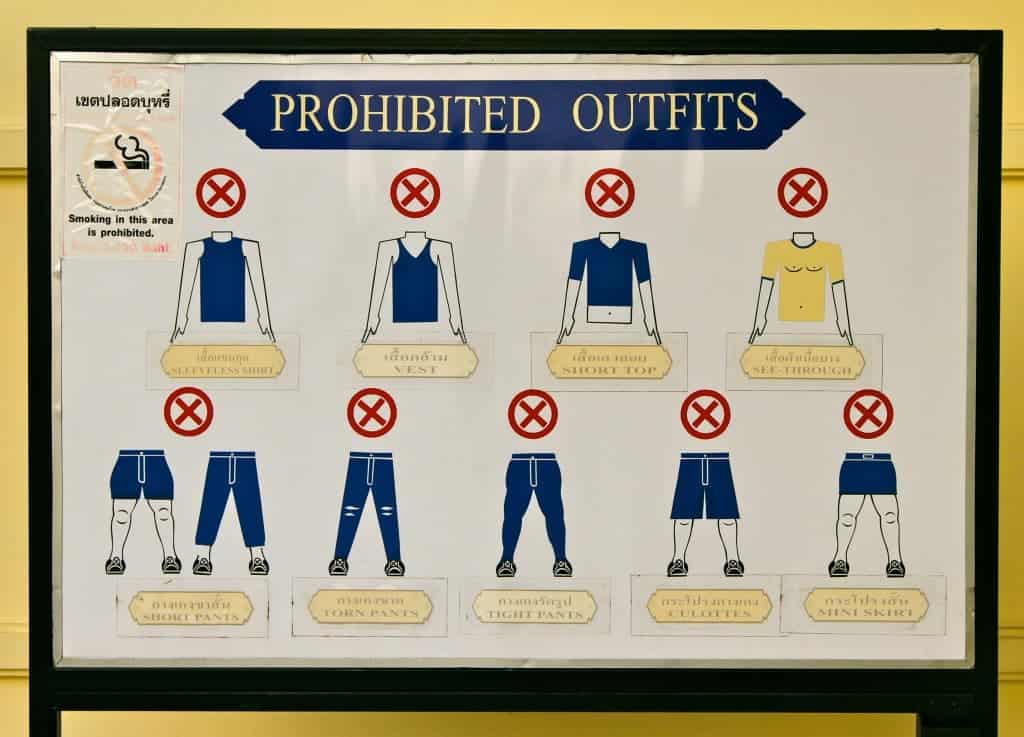 ADDRESS: Na Phra Lan Rd, Phra Nakhon, Bangkok, 10200, Thailand
TELEPHONE: +66 2623 5500 ext.3100, +66 2224 3273
IMPORTANT TIP: You cannot buy water anywhere inside the Grand Palace, so take with you a giant bottle of water to keep yourself hydrated.  Apart from the warm and humid Bangkok weather, the crowd of tourists will definitely cause more heat. Also, wearing light but decent clothes will keep you refreshed.

We only recommend writers and blogs that we read regularly and believe will deliver substantial value to our readers. The following are our top picks of articles and blogs that we think are worth reading to help you with your research on the Grand Palace:

For sure you’ll be taking lots of photos in the Grand Palace, as the place is truly a feast to the eyes. If you’re wondering where else can you take great photos in Bangkok, then this might help you: Bangkok Photos Top 20 (Best Photography Spots 2016).
Do you have an awesome link to a relevant well-written article that should be included here? If so, hit us up on Twitter by following and messaging us the link. Looking for the best budget stays in Bangkok? Check out our guide to Bangkok for further information.