Cambodia’s capital city has sure taken its fair share of criticism from city-weary travelers over the years! Yet there is plenty to see and there are countless things to do in Phnom Penh that impatient backpackers usually miss. Eager to get to the nearest beach or tropical paradise, many travelers breeze right through Phnom Penh, deciding nothing here attracts them.
Fair enough – each to their own.
But traveling is not all about beaches and perfect landscapes.
Understanding the character of a place and truly engaging with its people, customs, colours, and charm – this is where the heart of traveling truly lies. It’s next to impossible to really experience a city when you barely scratch its surface, let alone meet other people to explore it with.
I’m not pointing fingers – I was guilty of this myself on my first visit to Phnom Penh. I got frustrated with the never-ending ‘video game’ surge of motorbike traffic. Annoyed by the barrage of tuk tuk drivers and salespeople hollering for my attention, I promptly left the city, telling myself it wasn’t worth staying in – that there was nothing to see.
Now when I look back, I realize I did this without actually trying too hard to find things to do in Phnom Penh. I definitely didn’t notice the beauty in everyday life here. Now that I’m back in Phnom Penh long term, I can’t believe I missed these things the first time. Every stroll around town is full of beautiful surprises.
It’s a hectic place to explore, but isn’t every city?

As with many other major cities in Asia, Phnom Penh is a city of extremes. Wealthy, high-rise buildings house the offices of multi-million dollar businesses, while right outside a family sleeps in a hammock tied between lamp posts at night.
Tuk-tuk drivers sleep in their vehicles, while an increasing number of gigantic 4×4 cars forcibly inch through the narrow streets like unmonitored cholesterol – the city streets are simply not yet equipped for their bulk.
Phnom Penh seems to be expanding and growing at a rate nobody could have predicted. From my first visited back in 2015 to now, I can see a noticeable increase in Western influence. There are way more fast food chains, bars, and restaurants lining the streets. This rate of expansion puts a strain on the local infrastructure, but it makes for lots of compelling sights (and shots!).

The Ghost of Phnom Penh Past 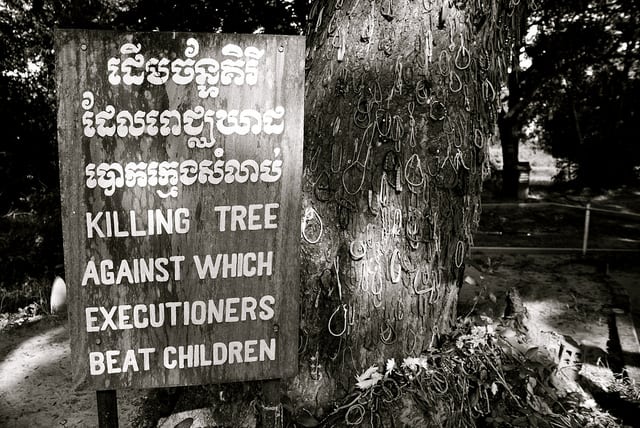 Cambodia’s turbulent and all-too recent history with the Khmer Rouge is certainly not the most appealing subject. It can be tough to breach in everyday conversation with new travel-mates.
But breach it you must, if you wish to truly glean an understanding of the country and its current state of affairs.
As the capital city, Phnom Penh played a pretty central role during the Khmer Rouge regime. Evidence of this period is still obvious in much of the architecture and landmarks around the city.
The Genocide Museum and Killing Fields are the general ‘must-see’ sites for those passing through Phnom Penh. They’re important but certainly not uplifting, which contributes to the negative view of Phnom Penh that so many travelers leave with. Staying in the city a few days longer helps put what you learn at these sites in perspective and give you a more well-rounded image of it. 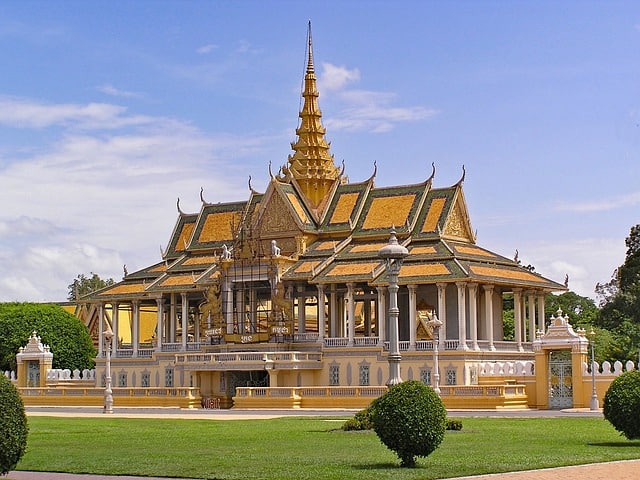 If you stay a bit longer and dig a little deeper, Phnom Penh’s earlier history (we’re talking way back when) tells a different story. Stunning golden temples dot the landscape, their gates inviting you inside (just be sure your knees and shoulders are covered!). Then there’s the splendour and timeless beauty of the Grand Palace, which is definitely worth a visit – with camera in hand.

You could easily fill at least a week in Phnom Penh with temple visits, if that’s your thing. There are also many other historical structures that happen to be quite attractive. You’ve got the Independence Monument, Wat Phnom, the National Museum… Whether you’re an architecture lover or an Instagram All-Star (or both!), Phnom Penh will keep stunning you as long as you’re willing to look.

Koh Dach island, more commonly known as ‘Silk Island’, is still well within city boundaries. It’s just a short ferry ride across the Mekong River from central Phnom Penh. You’ll thank us for that hot tip, because it’s a photographer’s dream over there. A short ferry ride brings you to a completely different landscape. It’s also a great vantage point to capture Phnom Penh’s budding skyline.
The ferry port is easily reached via tuk tuk from Mad Monkey Phnom Penh. You could also rent a bike and pedal down there, and then you’ve got a bike to explore the island with! It’s a lovely way to spend a day.
On Silk Island you can catch a breath of fresh air, watch silk get spun the old-fashioned way, and wander through picturesque rural scenes. It feels like taking a step back in time. It is possible to spend the night on Silk Island too, but we don’t know of any good options out there that fit a backpacker budget. We’d recommend grabbing a bite to eat, hopefully chatting with some locals, and returning to the city around sunset.
Pro Tip: I had the best pizza of my life on Silk Island, at Le Kroma Villa resort! Okay, okay, I was starving after an entire day’s cycling around the island, but I stand by my statement: it was a spectacular pizza.

From the stimulating and chaotic hubs of vendors at the markets, to the pristinely maintained lawns of the Royal Palace, the colours of Phnom Penh are vivid and exotic. Somehow they seem to both contrast and compliment one another at the same time.
It shouldn’t make sense, but it just kind of…does. In it’s own way, Phnom Penh makes chaos seem calm. Give it some time, and you’ll slowly start to discover and appreciate the various subtle nuances that give the city its charm.
The bright orange robes of young monks rustle past you on the street, a vendor tries to sell you something from her neon array of local fruits, sunshine yellow flower petals catch the breeze in the trees over your head… Phnom Penh is a kaleidoscope of colours (and smells, and sounds, and tastes) that leaves many a visitor lost for words.
There’s a lot going on. There’s a lot to take in. It’s a capital city, after all. Embrace it, and do your best to capture it.

So we’ve listed some photo inspiration, but you’re not yet convinced that Phnom Penh is beautiful. May we present ‘Exhibit B’? This video by Caveman Productions will inspire a little wanderlust in even the most diehard Phnom Penh-hater. Try to hunt down some of these locations next time you’re in the city for more ‘Instagrammunition’:

More Things To Photograph/Things To Do In Phnom Penh

The fun doesn’t stop here. There are countless beautiful sights in Phnom Penh, and just as many blogs out there to help you find them. If you’d like to add to the amazing tips we’ve dropped above, check out some of the resources below. With a little planning and thought, Cambodia’s capital city could turn out to be one of the highlights of your Southeast Asia backpacking trip. These are some informative, honest articles to get you going: