When Is The Best Time To Visit Bangkok?

A guide to the Bangkok seasons

Bangkok is the capital city of Thailand, a city almost every Southeast Asia backpacker will find themselves in at some point. Your Bangkok experience will vary a lot depending on what time of year you visit. There can be an overload of information and advice out there about what the best time to visit Bangkok is, so we’ve made you this simple guide.
Thailand is a tropical country, so it has 3 seasons:

‘Cool’, ‘hot’, and ‘rainy’ are relative terms, though. As part of a tropical climate, Thailand is always going to feel warm and humid compared to most Western countries. We’ve broken down the weather month by month to give you a more specific idea of what to expect when you arrive in Bangkok. We hope this information helps you plan your trip!

Bangkok has great weather in January. It’s cool out but the sun shines most of the time (about 9 hours per day, on average!). It’s the definition of “tropical cool.” Basically: you sweat less than you will the rest of the year.

There can be a bit of rain in Bangkok in January. It’s usually only about 2 days out of the month, and 10mm of rain total. You can expect the temperature to be between 21°C and 32°C.

The nights are cooler this month, so all of Bangkok’s outdoor beer gardens and restaurants come alive. There’s nothing like enjoying the cool evening breeze while reveling in Bangkok’s awesome city sights. 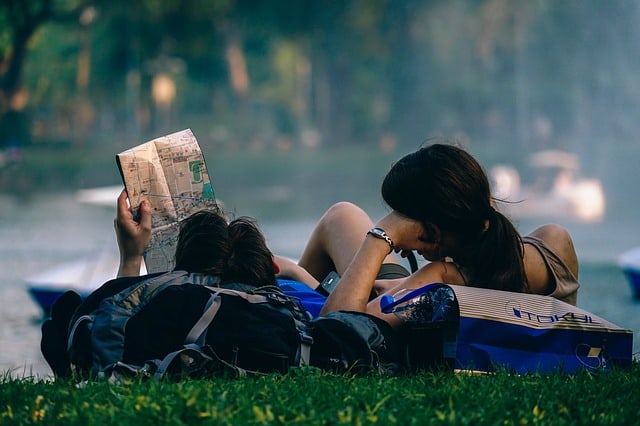 February is still the cool season in Bangkok. The temperature usually ranges between 23°C and 33°C. That probably sounds pretty good compared to February wherever you’re from!

In Bangkok, the sun shines for an average of 8 hours a day in February. Be sure to stay sun safe if you visit Bangkok in February. Drink plenty of water and protect yourself with SPF while you’re out and about in the city. Considering a refreshing dip? The water temperature in the sea is about 28°C.

It’s no secret that this season has the year’s best weather in Bangkok, so the city fills up with tourists around this time. You may want to avoid visiting if crowds annoy you. If you can stand the company, though, you’ll benefit from beautiful blue skies and lower humidity (relative to the rest of the year).

March is the beginning of the hot season in Bangkok. The highest temperature recorded in Bangkok in March was a scorching 40°C! Don’t worry, though. Temperatures generally settle between 25°C and 34°C.

Those are still higher temperatures than most visitors are accustomed to. We’d recommend drinking plenty of water and splurging for a room with AC! In March, you can expect 9 hours of sunshine each day in Bangkok. There’s a chance of rain – about 50mm for the month, spread over 5 days or so. The humidity hangs around 70%. You’ll feel sticky and sweaty.

There is an advantage to the climbing temperatures and humidity, though. Tourism begins to drop off, which means shorter lines and off-season discounts around the city.

Most travelers skip Bangkok in April because it’s the hottest month of the year. If you’re willing to brave it, you can expect temperatures between 26°C and 35°C. It’s not unheard of for the thermometer to soar to 40°C, though. That’s with 70% of sticky humidity.

The sun beats down for 8 hours a day in April, with just a 32% chance of rain. There is one awesome source of relief from the heat that attracts a lot of backpackers, though: Songkran Water Festival! This 3-day festival of water fights and parties is a highlight of many people’s Southeast Asia trips. Just be sure to celebrate safely – many festival-goers suffer from fatigue and heatstroke because of the season.

May is still a hot season in Bangkok, but it’s a little less blazing than April. The temperatures range from 26°C up to 39°C on an extreme day. The sun soaks the city for about 8 hours a day. It’s also pretty wet during May. There’s a 60% chance of rain and an average rainfall of 180mm.

May in Bangkok is extremely humid – 73% humidity, on average! It’s still possible to enjoy the city in May, but even the most adventurous backpackers need to remember to stay hydrated and incorporate lots of indoor rest stops into the day. This is the end of Bangkok’s high season, so you’ll be rewarded for bearing the heat with lots of off-season discount prices. 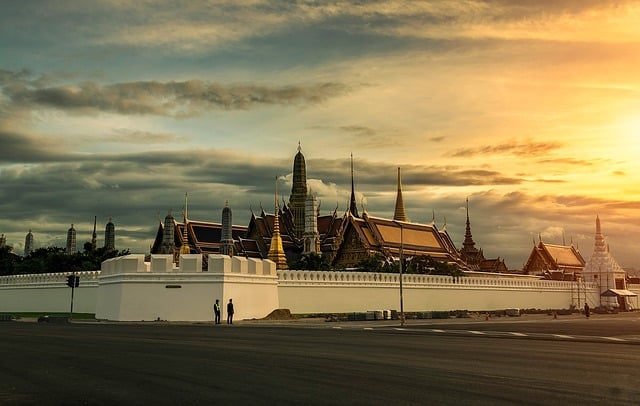 June marks the arrival of monsoon rains in Bangkok. Even so, the weather is sweltering.  The temperatures are almost identical to May, ranging from 23°C to 38°C. Humidity will be between 73% and 90%, so take lots of care to stay hydrated and cool!

Bangkok slows down a bit in June. Or at least, tourism slows down. The city itself is always chaotic! If you don’t mind a little rain, though, you’ll be rewarded with special rates on tourist attractions and hotel rooms. This can be a good time to plan a trip to Bangkok if you’re on a tight budget.

Bangkok’s weather is very humid and very rainy in July. Temperatures range from 26°C to 33°C. Tourism drops off completely, apart from one exception. July means summer holidays in Western Europe, and many Europeans come to Thailand for a summer holiday.

These holiday-makers are willing to withstand the rain to take advantage of low accommodation prices due to the low tourist season. Even during this rainy season, you can expect 5 or 6 hours of sunshine on an average July day in Bangkok. It’s not such a bad deal! No wonder so many Europeans descend on Bangkok, or pass through on their way to the Thai islands.

If you’re traveling to Bangkok in July, pack light clothes (for the warm weather) and an umbrella (for the serious rainfall!). Fair warning, Bangkok’s traffic can be a nightmare when the rain hits. The good news is that rainstorms tend to be brief. They seldom last more than 30 minutes or so.

Going to Thailand? – Check out our Backpackers Guide to the Thai Islands

August brings regular rain showers to Bangkok. Droves of young backpackers still make their way to Khao San Road this month, though, because it’s a school break in many countries. The hotels drop their rates in August, so you’ll have lots of options in your price range and may score a great deal.

The deals aren’t all that’s hot in Bangkok in August. Temperatures range between 26°C and 33°C. Be ready for a downpour at any time though. There’s a 68% chance of rain with an average rainfall of 170mm over the course of 21 days. It’s a time of extremes, so be prepared with both rain gear and sun protection. Also be prepared to meet lots of young travelers!

September is the peak of the monsoon season in Bangkok. The city gets around 220mm of rainfall. Still, this is Bangkok, so the atmosphere is hot and humid. Temperatures fall between 25°C and 32°C. Humidity is about 77%. The highest temperature recorded in Bangkok in September was 37°C, so be ready for anything!

Tourism hits a lull in Bangkok in September. If you’re a young backpacker, this might be the time that you are planning your trip or just setting off to catch the busier months of October through February. If that’s the case, be sure to check out our Southeast Asia Backpacker’s Guide for lots of useful resources. If you do find yourself in Bangkok this month, enjoy the relatively empty city! You’re likely to have some experiences and discounts that high-season travelers miss.

October is a tricky month in Bangkok. It tends to bring floods, which cause a lot of congested traffic and hassle when they spill into the streets. Lots of rain still falls in October as well – about 190mm over 16 days. The temperatures fall between 25°C and 32°C. The humidity is 76%.

Tourists tend to avoid the rain and floods, so as with the rest of the low season there’s a lot to capitalize on if you’re willing to risk the rain every day. Your perseverance will be rewarded with lower accommodation rates, low season discounts around the city, shorter queues, and more interactions with locals.

In November, the Bangkok weather is at its most pleasant. The rainy season winds down and the sun comes back out for about 8 hours a day. Typically Bangkok gets 40mm of rainfall over 5 days in November. That’s great odds for backpackers hoping for sunshine! The temperature in Bangkok in November settles somewhere between 24°C and 31°C. Expect humidity around 67%.

Bangkok hotel rates go up in November as tourists begin to flock to Thailand. This is widely considered the best time to visit Bangkok. You may have bigger crowds to contend with than at other times, but you’re also likely to have a perfect weather backdrop for your adventure. You’ll be able to take better advantage of the river and the many Bangkok attractions that are partially or fully outdoors. 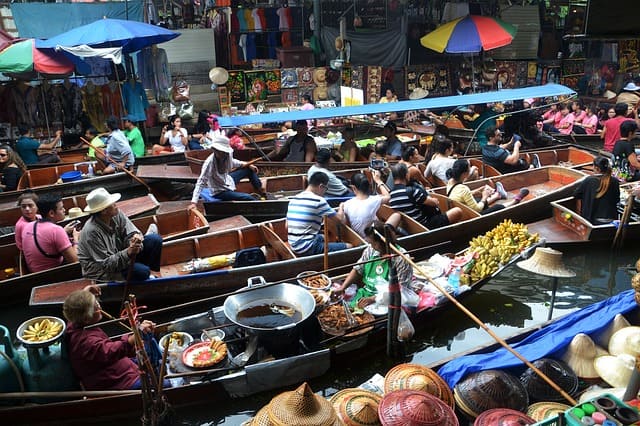 The height of High Tourist Season

December is the definitive height of tourist season in Bangkok. And with good reason! The weather is ideal. The temperature ranges between 21°C and 31°C, and the city cools down at night. There’s only about 40mm of rain that falls over 2 days. Each day is almost guaranteed 9 hours of sunshine.

Bangkok comes alive in December with the optimal weather. Nightlife kicks off, so all the bars and clubs are bustling. Hostels in Bangkok are teeming with backpackers from all over the world. It may be busy, but let’s be honest: Bangkok is never going to feel calm, anyway. At least if you visit in December you have a heightened chance to meet awesome travelers. It’s high season for a reason!

More Info on the Best Time to Visit Bangkok