Chiang Rai is Chiang Mai’s weak competitor in terms of tourism. The lure of Chiang Mai’s laid-back vibe and hipster aura draws in travelers from all over Thailand. Because of this, Chiang Rai oftentimes gets lost in the shuffle. There is something about Chiang Rai, however, that continues to peak the curiosity of tourists traveling to the Kingdom. If you are trying to decide where it is you should go, we have come up with a guide on why you should visit which city in Northern Thailand, and why. Good news … you can always visit both! Regardless, be sure to check out this complete guide to these stunning, Northern Thai cities.

In order to decide which city you want to include on your itinerary, it is important to get to know a little bit more about each one. Consider this your speed dating read to the cities of Chiang Mai and Chiang Rai!

Top Attractions in Both Cities

Before visiting any city, it is important to note the top attractions in them, from cultural to adventurous and more. Luckily for visitors of either city, both are simply teeming with cool finds. From galleries to temples and much more, here are the top 10 attractions in both cities to help you decide which one to visit (or convinces you to visit both).

Budget travelers will want to venture to Chiang Rai over Chiang Mai. Though both cities are incredibly affordable, there is certainly a difference in the cost of accommodation, cuisine, and more in Chiang Rai. With less going on in Chiang Rai in general, as well, you will surely save on the cost of excursions and activities, as there are simply fewer. One of the top things to do in Chiang Rai is to explore the incredible landscaping, which can be done (oftentimes) for free, as well.

No city is equipped with more day trips than Chiang Mai. Cool off in Thailand’s sometimes unbearable heat and head to the (other) Grand Canyon, essentially a large, man-made reservoir where visitors can swim, sunbathe, and cliff jump. If the Grand Canyon is not your thing, instead book a half or full day tour and go white water rafting. If you want to steer clear of water altogether, you can also zip line through Northern Thailand’s jungle treetops, volunteer at an elephant sanctuary, and so much more. While Chiang Rai does have its fair share of day trips, none are as adventurous as those offered in Chiang Mai.

With about 30 temples in the Old City alone, those tourists who want to delve into the Buddhist culture of the Kingdom should definitely frequent Chiang Mai over Chiang Rai. Though Chiang Rai is home to the renowned White Temple (Wat Rong Khun) and the Blue Temple (Wat Rong Suen Ten), these simply cannot compete with the religious structures sprinkling the city of Chiang Mai. From the towering Wat Phra Doi Suthep found atop a mountain to the incredible Wat Chedi Luang, this is the city to frequent if you are wanting to visit one too many temples and pagodas.

Though more and more tourists are making their way to Chiang Rai each year, it still remains the lesser visited cities between the two. If you consider yourself to be an introvert or simply need a break from the herds of people that vacation in Thailand, then maybe escaping to Chiang Rai is the perfect thing to add to your itinerary. It has loads more greenery and is less flashy than Chiang Mai, allowing you to step back and appreciate this city’s charm.

Food does not get much better than the street food stalls and restaurants found throughout the city. If you are tight on baht, be sure to check out our comprehensive list of budget-friendly restaurants you need to indulge in (for a few bucks or less). Markets are found around the city every night of the week, so you will always have a food cart to meander to after dark to taste some of Thailand’s delicious street food. If you are looking for something a bit more upscale, there are plenty of aesthetically pleasing restaurants serving up brunch and delightful Thai and Western meals. The city is also crawling with vegan and vegetarian restaurants. The vegetarian scene is so large, in fact, that many of meat-free travelers make a point to include Chiang Mai on their list of places to visit, and we don’t blame them!

Chiang Mai is home to its fair share of historic monuments, centers, and museums. It was the previous capital of Siam, of course, and because of this, rich history can be found around every corner of the city. With that being said, Chiang Rai was one of the main entry points in the country of immigrants from China who were crossing the Mekong River to do so. Because of this, and the fact that King Mengrai established his first dynasty in Chiang Rai, both cities are perfect places to visit for those of you who consider yourselves to be culture vultures.

Fun (not so fun) fact: King Mengrai died in 1317 when he was struck by lighting

With not a whole lot going on in Chiang Rai in comparison to Chiang Mai, travelers to this city oftentimes take to the surrounding mountainous terrain to partake in breathtaking treks and hill-tribe visiting hikes. It is not advised that you take to these trails alone (depending on the hike, of course), but there are plenty of tour companies that are happy to take you into the jungle and at an affordable rate. Doi Tong, a hill found on the northeastern edge of the city, is a great hike that can be taken on alone, for example. You can get great views of the Mekong and Mae Kok River with the mountains acting as their backdrops from several spots around the city of Chiang Rai, as well.

Chiang Mai Vs. Chiang Rai … Where Will You Go?

To wrap things up, you will not be disappointed if you include either of these cities on your itinerary in Thailand. Both cities have distinctive artistic and historic qualities as well as entirely different vibes to them, so choosing between the two can certainly be difficult. If you are staying in Chiang Mai, there are tour companies that offer day trips to Chiang Rai. If you take a day trip, you do not have to choose between these two unbelievable cities!


More Information About Both Chiang Mai and Chiang Rai

Did you love this article about these two incredible cities and why you should visit them? Do you want to learn even more about both Chiang Mai and Chiang Rai? Then check out these articles that we have rounded up featuring some of the best things to see and do in both cities, and why visiting them should definitely be included on your itinerary of the Kingdom. Happy reading! 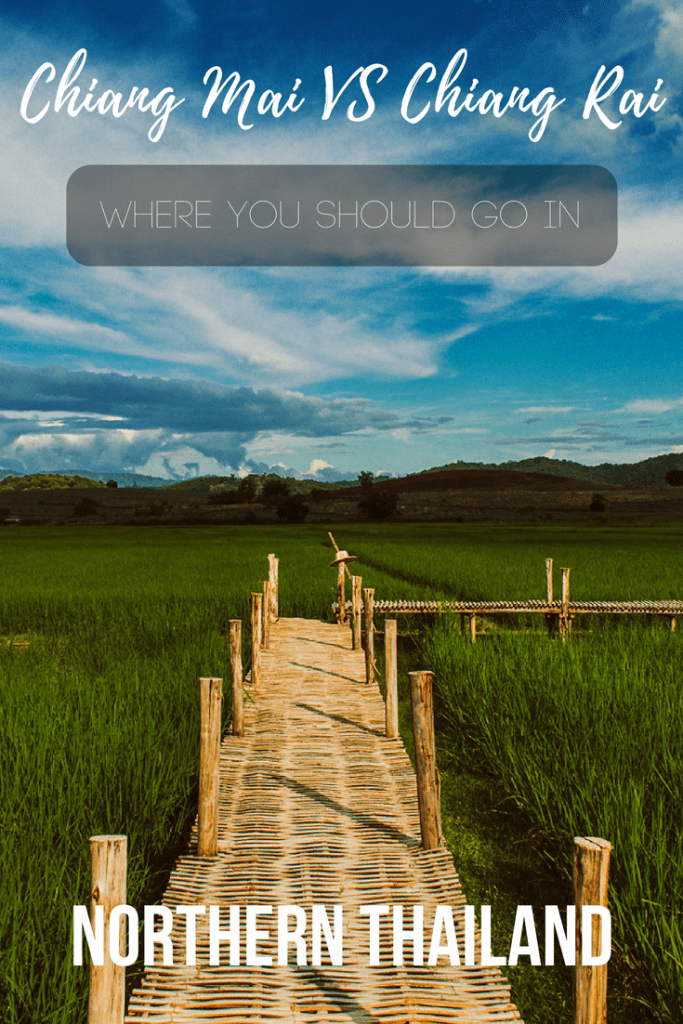