Get into party mode for five of Cebu’s world-famous festivals!

Festivals are an iconic part of many Philippine cultures, and Cebu can boast of holding some of the loudest, most colorful, and most spectacular ones in the country.

As one of the largest provinces in the Philippines, it is no surprise that there is a wide, year-long spectrum of festivals all over the different cities, municipalities, and islands of Cebu. Each of these places have their own way of celebrating the customs, artifacts, and folklore that their tradition gives importance to. Whether you’re hoping to learn more about a place firsthand or just looking for a good time full of technicolor music and dance, attending any of Cebu’s festivals would no doubt bring you an unforgettable experience.

The themes of many Cebuano festivals are often religious, historical, and/or cultural in nature. What these fiesta-loving people dedicate their parades and ceremonies to ranges from saints to battles to desserts (yup, those sweet stuff!). The most important thing to remember is that these festivals are organized and celebrated as a community. The people work together to keep the stories of their town alive for everyone to enjoy. While many of these traditions are centuries old, there is nothing boring about them. At a festival, everything is bigger, brighter, and bolder. Together, the locals and their guests can revel in a vibrant sea of delicious food and great company.

Viva Pit Señor! The grand and colorful Sinulog Festival is one of the most popular events in the Philippines, attracting thousands of people from all over the world each year. It has earned the title ‘Mother of All Festivals.’ While the main festivities are held in Cebu City, other parts of the province also host smaller versions of the festival. Sinulog is a culturally important celebration of Cebuano faith in the Santo Niño. The name ‘Sinulog,’ from the Cebuano word sulog meaning ‘like a water current,’ describes the festival’s prayer-dance ritual honoring the Child Jesus.

The activities traditionally last nine days, featuring pageantry, historical exhibits, musical acts, and cultural shows. On the eighth day, a water parade called the Fluvial Procession carries the Santo Niño on a flower-ornamented pump boat from the Mandaue City wharf to the Cebu City wharf. The procession stops at the Basilica Minore del Santo Niño, finishing with a re-enactment of the Christianizing of Cebu. The festival ends on the ninth day with its two most important events: the Hubo Ritual Mass, and the Grand Parade. By 4 am the Pilgrim Center of the Basilica is packed with devotees there to witness the ritual changing of the vestments of the Santo Niño. At the Grand Festival, giant floats and brightly-costumed participants dance through the streets to the sound of drums, trumpets, and native gongs.

Future attendees should note that festival organizers and the local government have recently begun implementing safety precautions such as a backpack ban, a weekend-long liquor and street party ban, and temporary signal shutoffs in certain areas.

Mactan Island is famous for being the site of Ferdinand Magellan’s defeat at the hands of Chief Lapu-Lapu and his warriors. The legendary Battle of Mactan is annually re-enacted on its anniversary, April 27, at the Mactan Shrine in Lapu-Lapu City. The performance includes a river procession of Magellan’s three ships (re-imagined as bangka, the Philippines’ traditional fishing boat) to the beach, followed by a re-enactment of the planting of Magellan’s Cross and Lapu-Lapu’s eventual victory over the first set of Spanish invaders to arrive at the country’s shores. Though the story remains the same, its presentation at the shrine is varied every year. A number of high-profile celebrities are usually cast as the historical figures. Celebrities from local networks, such as Derrick Monasterio, recently portrayed the country’s first national hero. Now that the Mactan Shrine can accommodate 30,000-40,000 people, audiences can expect longer and more spectacular programs.

In the days leading up to the show, the Kadaugan sa Mactan festival showcases other lively events, such as a mouthwatering food festival and a three-night street party organized by the whole community. The Rampada sa Kalsada, literally translated to ‘rampage on the streets,’ is a noisy and crowded feast of entertainment stations that include food kiosks, disco dancing, and other fun activities. On another day, the city holds a spirited dance competition consisting of representatives from the different barangays. Mactan Island actively promotes the importance of remembering these turning points in history. Its celebrations and shows pay tribute to the hard-fought battle for the people’s freedom.

The annual Pintos Festival is named after a popular local delicacy that mainly consists of corn, butter, and milk, all wrapped inside a corn husk. Some sellers offer special versions topped with coconut or cheese. Pintos is a dish best eaten steaming hot. Since corn plantation is Bogo’s primary agricultural product, one of the festival’s aims is to promote the industry and attract tourism. However, the celebration is also the people’s show of thanksgiving for another season of abundant harvest. One of the main events is a street dancing competition. The choreographed routines in this program come up with their own creative interpretations of the step-by-step process of preparing the corn fields, planting the seeds, and harvesting the crop.

The Pintos Festival is a relatively new tradition. It replaced Bogo’s previous celebration, the Kuyayang Festival. Kuyayang is a courtship dance that exhibits the old Bogohanon way of doing things. Though the Pintos Festival has taken over as Bogo’s grandest event of the year, the kuyayang dance has been maintained as an integral part of the festivities. Barangays from all around the city come together and form five cluster tribes to do the dance. Other Pintos events include sports and dance competitions, the Ginoong Bogo (Mr Bogo) pageant, and an agricultural fair. The festival also holds ‘bankarera‘ (boat racing), a dragon boat race, a duathlon, and other local games.

The Kabkaban Festival’s primary focus are its dance rituals, which are believed to be a way of fending off bad spirits. It is celebrated in honor of the town’s patron saint, St. Catherine of Alexandria. The tradition of holding the Kabkaban was inspired by Val San Diego, an advocate of Cebuano heritage conservation and a notable choreographer for the San Diego Dance Company. The festival is named after a grass species called ‘kabkab‘ which grows around the area and is incorporated into the dance rituals. The festival’s many highlights include a vibrant and energetic parade, a beauty pageant, a street dancing competition, an agro fair, and multiple variety shows. The festival’s theme changes every year and is reflected in the costumes and floats of the participating city sectors.

The festival also provides a gateway to exploring the beautiful and culturally rich city of Carcar. The city is known for its many craft industries, producing wooden furniture and decorations, bolos (wide-bladed knives), baskets, and many more handcrafted goods. It is most famous for its locally-made, high-quality, and inexpensive shoes. Carcar is one of the best-preserved heritage towns in the Country. Architectural feats such as churches, plazas, monuments, and ancestral houses from the Spanish-colonization period are scattered throughout the city. It is also one of the best stops in the province for a taste of Cebu’s world-famous lechon.

The Tag-anitohan Festival blends together a uniquely Filipino mix of Christianity and paganism. The festival highlights pre-colonial Philippine traditions through a parade that showcases the town’s historical practice of worshiping spirits, locally called ‘anito.’ The celebration also honors the town’s patron, the Immaculate Concepcion. This illustrates the town’s religious identity as a product of two different spiritual influences.

The town of Tudela was previously named Tag-anito, which when translated means “place of spirits.” In many ways it may be said that Tudela has not lost its touch as a deeply mystical, historical space. One of the festival’s biggest attractions is a series of dances that reinterpret the ancient tale of Mandayang, a warrior who summoned guardian spirits using native talismans in order to protect the town from Moro invaders. The reenactment emphasizes the importance of preserving what we know about stories and practices from the pre-colonial period for the benefit of generations to come.

While the festival provides a one-of-a-kind supernatural experience, exploring the island paradise of Tudela is an unforgettable adventure in itself. Tudela is part of the Camotes Group of Islands. It is a tourist hot-spot filled with caves for spelunking, ocean sanctuaries for snorkelling and diving, and white-sand beaches for those who wish to lounge beneath the sun. It offers the perfect summer getaway.


These five are only a few of Cebu’s many beautiful and high-spirited festivals. No matter which month of the year you find yourself in the province, you will most likely have the chance to experience some of the richest extravaganzas the world has to offer.

More information about colorful festivals in Cebu you shouldn’t miss:

Did you find this article helpful? While we’re confident about our opinions, here are some other equally helpful articles in case you’re not sure which festival to catch: 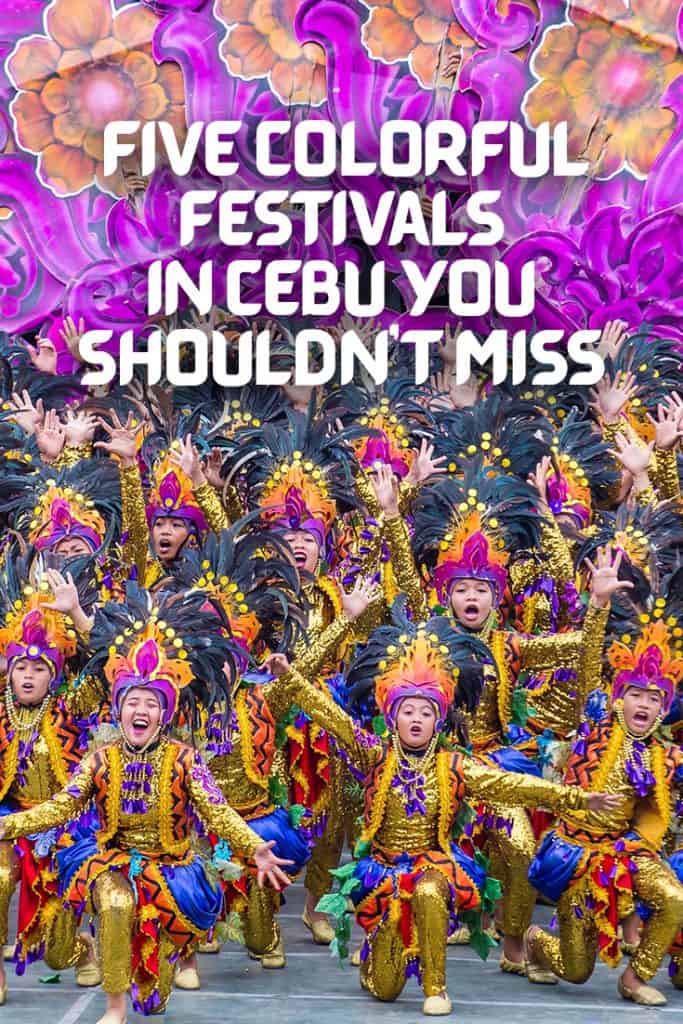