Art History of Rome, the history of art in Rome (QUICK TOUR)

Nearly 3,000 years of art history, architecture and culture can still be seen in Rome, the cosmopolitan capital city of Italy. Few cities in the world can rival Rome’s rich artistic heritage. Rome has played an important role in the great upheavals of Western art resulting in priceless treasures that tourists can easily view such as ancient statues, Byzantine mosaics, Baroque facades, and Renaissance frescoes. It is home to the masterpieces of great artists such as Michelangelo, Caravaggio, Raphael and Bernini. Below is a review of Rome’s artistic history which can guide you in your visit.  You may also find our articles Romes Museums Sightseeing and Attractions Guide and Rome in Two Days a 48h Itinerary of use.

Art History of Rome – An introduction

Ancient Rome, was founded in 750 BCE, and was, for centuries, the most powerful nation in the world. Well known for its military expertise, urban architecture and engineering, Rome at that time merely tended to turn to the Greeks when it came to art. The Greeks then had fully mastered painting, sculpture and the decorative arts such as jewelry, mosaics and metal work. While Roman artists were known for their innovations in urban architecture, landscape painting and portrait busts.
Initially, Rome was ruled by Etruscan kings from Asia Minor who commissioned murals, sculptures and metalwork in their own styles to be used for their tombs and palaces. By the 6th century B.C., they began borrowing the artistic styles of the Greeks. 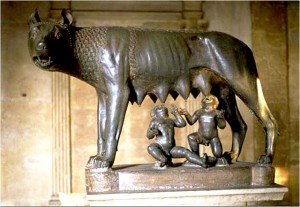 One of the most famous bronze sculpture by Etruscan artists, the Capitoline Wolf can be found at the Musei Capitolini in Rome. It shows a she-wolf suckling twin human infants, Romulus and Remus,the mythical founders of Rome. According to the founding myth of Rome, the city was founded on 21 April 753 BC by twin brothers Romulus and Remus, descendants of the Trojan prince Aeneas.
By 500 BCE Etruscan influence waned and, from 300 BCE the Romans, who came into contact with the flourishing Greek culture fell under the influence of Greek art, known as Hellenization. Soon Greek artists came under Roman patronage and many Greek works of art were brought to Rome. As one of the most important sculptures in the world and an integral part of the art history of Rome a visit to see the Capitoline Wolf is highly recommended.

During the Hellenistic age, the Romans became aware of the use of busts and statuary to convey their political messages such as the Column of Marcus Aurelius that illustrated military achievements. 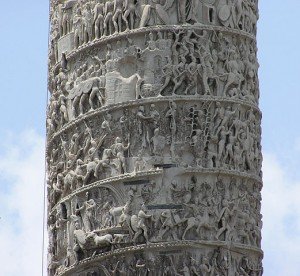 Located in Piazza Colonna, Rome, this victory column is made from 27 or 28 blocks of Carrara marble that tells the story of Marcus Aurelius’ Danubian or Marcomannic wars, he waged from 166 to his death.
But it was only in 200 BCE, after Rome won against the Hannibal and the Carthaginians, that it felt secure enough to develop its culture. 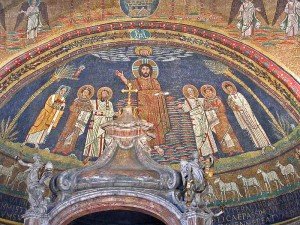 The best samples of Byzantine mosaics in the world are found in Italy. One example is at the Basilica of Santa Prassede in Rome, an ancient titular church and minor basilica located near the papal basilica of Saint Mary Major, at the corner from Santa Maria Maggiore.
Santa Prassede which dates to the 9th century, still has its original Byzantine mosaics. Pope Paschal, who reigned 817-824 along with emperor Charlemagne wanted Christianity to return its foundations, theologically and artistically. To achieve this, Paschal launched two programs: one is to recover the martyrs’ bones from Rome’s catacombs and the other, to build more churches.
To decorate the churches, Paschal hired professional mosaicists. In Santa Prassede, mosaics were installed in the apse, the triumphal arch, and the apsidal arch. In the apse, Jesus, positioned at the center is flanked by Saints Peter and Paul who present Prassede and Pudenziana to God. On the far left is Paschal, with the square halo holding a model of the church as an offering to Jesus. Below is an inscription that expresses Paschal’s hope that this offering can secure his place in heaven. 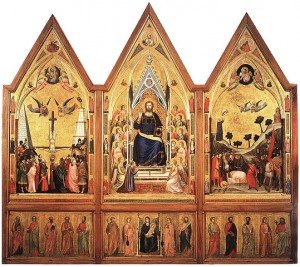 Late medieval Italian art were still largely ecclesiastical. In both Gothic painting and sculpture, the highly stylized, richly colored figures were more natural than in the Romanesque. One work by artist Giotto di Bondone (1266-1337), considered to be the greatest Gothic artist to work in Rome, can be seen at the Pinacoteca Vaticana, Rome. Titled, Stefaneschi Triptych Altarpiece (1315). This tempera on wood consists of three panels — the Crucifixion of St Peter, the Enthroned Christ, and the Beheading of St Paul. A predella shows the Virgin on a throne holding the Child Jesus and surrounded by the Apostles. The back of the triptych is also painted showing St James and St Peter Enthroned, St Paul, St John the Evangelist, and St Andrew and on the three panels. 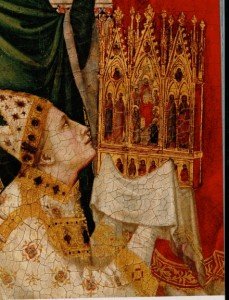 Giotto di Bondone style has been recognized in Western art as revolutionary due to his rounded forms that reflect a deep feeling for humanity. His work is also recognized as one of the earliest known examples of the so-called “Droste effect,” when a picture appears within itself.

Renaissance art in Rome arrived from Florence in the fifteenth century. Florence, known as the ” the Cradle of the Renaissance” was where artists, painters, sculptors and architects came from before they moved to Rome. These artists broke away from the static medieval traditions and experimented with new modes in artmaking using more expressiveness and naturalism, and applied new techniques such as linear perspective.
During this period, the Popes in Rome were the patrons who funded the artists such as Michelangelo, Raphael, Antonio da Sangallo, Bramante, and others who were responsible for some of the most important works in the city. At this time, the Church gave importance to the restoration of churches and monuments. One of the most important artistic projects of the Renaissance in Rome was the reconstruction and decoration of the Sistine Chapel.
Michelangelo’s masterpiece, considered to be the epitome of High Renaissance art, is the magnificent frescoes at the Sistine Chapel at the Vatican Museums. Michelangelo painted on the ceiling and the wall of the altar of the Sistine Chapel from 1508-1512. His painstaking work is based on nine scenes from the Book of Genesis such as the popular Creation of Adam showing the hands of God and Adam touching. The complex design, made largely of clothed or nude human figures, fully demonstrate Michelangelo’s facility in the human figure that have influenced artists for many generations. 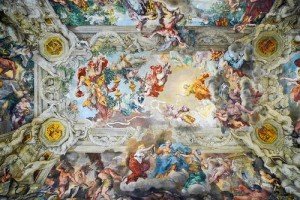 The Baroque period was essentially concerned with the dramatic, illusory, and the elaborate using vivid colours and luxurious materials. Architecture, painting, and sculpture were combined into a decorative whole. Baroque space, in contrast with the static, defined and symmetrical space of High Renaissance, is utilized more with directionality and movement, a contrast with the unbalanced spaces of the Mannerist period of Romes art history.
The baroque is more theatrical and decorative that uses a kind of super-realism and an exaggerated use of light and dark, called chiaroscuro.Rococo is a facet of late Baroque art than an autonomous style. The three great masters of the Baroque in Rome were Gian Lorenzo Bernini, Francesco Borromini, and Pietro da Cortona.
The Allegory of Divine Providence and Barberini Power fresco (1633-1639) by Italian painter Pietro da Cortona, at the large ceiling of the grand salon of the Palazzo Barberini in Rome., Since the 1620’s, the Palazzo had been the palatial home of the Barberini family headed by Maffeo Barberini, by then Urban VIII, who had extensively refurbished the city with art and architecture.
The Cortona fresco depicts the solar Divine Providence at one end of the sky while at the other end are flying maidens holding the papal keys, tiara, with robe belt above a swarm of heraldic giant golden bees. Time with a scythe is also portrayed and a starry Crown of Immortality being lifted towards a swarm. The Barberini family coat of arms included three bees which some scholars suggest that one of the fresco’s intentions was to portray the Barberini papal election. At one edge of the fresco are hardworking laborers whose efforts seem to shatter the outer frame. 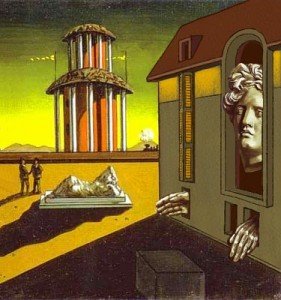 In the years before World War I, Italian artist, Giorgio de Chirico (1888-1978) founded the scuola metafisica art movement or the metaphysical art movement which had influenced succeeding surrealists. After 1919, he began to employ traditional painting techniques such as the neoclassical or neo-Baroque style, while creating the metaphysical themes that depict figures and objects are in odd juxtapositions, unnatural shadows and perspective, and other strange effects.
De Chirico, whose best known works were made between 1909 and 1919, are characterized by images that evoke haunting and brooding landscapes. De Chirico’s works can be seen at the National Gallery of Modern Art, the Collection of Modern Religious Art in the Vatican Museums, and the Giorgio de Chirico House-Museum (Casa Museo di Giorgio de Chirico), in the 16th century Palazzetto del Borgognoni at Piazza di Spagna 31 in Rome.
For more samples of surreal paintings by Giorgio de Chirico, visit the Giorgio de Chirico House-Museum.  Now owned and operated by the Foundation since 1990,  (after the death of the artist’s widow, Isabella Pakszwer Far),  the artist’s apartment-studio along with the majority of the artist’s works including numerous paintings, works on paper and sculptures, the collection consists largely of works executed by de Chirico during the last 30 years of his life.
All visits include a guided tour in English or Italian.There are 3 tours per day at 10am, 11am and 12pm. Advanced booking is obligatory. VISIT THE FONDAZIONE GIORGIO E ISA DE CHIRICO WEBSITE for more details.

Helpful articles and blog posts – Things to do and see in Rome, Artistic and museum tourist attractions

We only recommend writers and blogs that we read regularly and believe will deliver substantial value to our readers. The following is our top picks of current articles we think that are worth reading for more reviews and information on Rome’s museums.

Do you have an awesome link to a relevant well written article that should be included here? If so, hit us up on Twitter by following and messaging us the link. Looking for the best budget stays in Rome? Check out our guide to Rome for further information.
How Did We Do?
Is the article “A tour of Rome’s history of art” useful? If so, please share and like this post, as it helps other travelers find information. Many thanks! You can follow us on Twitter or Facebook for further updates!