Cebu Commute: A Guide to Getting Around

Cebu is one of the country’s largest provinces in terms of both land area and population. Its terrain covers different land formations, bodies of water, and bustling cities. As one of the busiest and most developed hubs in the Philippines, a variety of transport options are available for locals and tourists looking for a means to get from point A to point B. Whether you are crossing land or sea, hopping onto any of these vehicles does not just get you where you need to be; it is also a great way to get a quick peak at Cebu’s many renowned sights.

As long as you don’t mind sharing, interesting modes of public transportation are readily available for the traveler on a budget. One of the cheapest and most reliable ways to get around, whether you’re in an urban or rural area, is via the iconic Filipino public utility jeepney (PUJ). These colorful vehicles cost $ 0.15 at minimum. This fare is for the first five kilometers, with an additional $ 0.02 for every succeeding kilometer. There are many possible jeep routes, so keep a look out for the street names and landmarks painted at the vehicle’s side for a clue on where one is going. One thing that makes Cebu jeeps special is that they have number codes pasted at their front and side to indicate which major boulevards they are passing through. While figuring out the jeepney’s unique system might be a challenge for first-time tourists, it is definitely an adventure worth taking.

Tourists should note that the jeepney is ill-suited for those carrying more than one backpack per person, making it an unpopular transportation choice from the airport to the city. Another option that might accommodate luggage a little better is the multi-cab, many of which are vans or mini pick-up trucks. Like the jeepney, the multi-cab also has a $0.15 minimum fare, but takes shorter trips that might require transfers to other vehicles. From the airport, many people contact van rentals or coordinate pick-ups with their hotels days prior to their arrival.

Buses are a standard public transportation choice good for both long trips that require crossing highways, and short trips between different points within a particular city. Within cities, bus fares are $0.12 for the first five kilometers with a $ 0.03 increase for every additional kilometer. For long trips that cross one end of the province to another, tourists must pick between the two major bus terminals in Cebu, depending on which area they are coming from. This is the North Bus Terminal (for those going to northern areas such as Malapascua, Bantayan, or hopping over to the neighboring province Iloilo) and the South Bus Terminal (for those going to southern areas such as Moalboal, Toledo, Oslob, and those crossing to the neighboring province Dumaguete). The fare usually ranges from $3 to $5, depending on your destination and if you are taking a bus with or without air-conditioning.

The newly introduced fully air-conditioned MyBus line is useful for touring the city. Services connect tourists from the airport to major city malls (SM City Mall, SM Seaside City Cebu) and the North Bus Terminal. The bus services run from 6 am to 10 pm, with a fixed rate of $0.50. Take note, however, that MyBus only accepts cash at the airport and SM City Malls. Passengers must purchase a travel card worth $4 at on-site booths.

While there are also cheap options for those who wish to travel more privately, these vehicles are mostly limited to short trips. One major mode of Filipino transportation is the tricycle. The regular tricycle rate is $0.15. At maximum capacity, the tricycle can fit 4-6 people, but passengers may request for a private ride at a higher fee. An interesting variation of the tricycle is the trisikad, which uses the same concept of a carriage attached to a bike. While the tricycle is attached to an engine-powered motorcycle, the trisikad literally runs on manpower. The driver pedals you through the city with a bicycle. It can cost anywhere from $0.01 to $0.30 depending on the distance, but because of the amount of work the labor takes, it is recommended to leave your ‘driver’ a tip. While not the most efficient form of transport, it certainly provides an experience you might never find elsewhere.

As an unregulated form of transportation is the app-based Habal-Habal and is usually not recommended for tourists. However, these motorcycle-scooter ride for hire businesses are scattered all over Cebu and are a common way of getting around town. Fares are usually agreed on through the app. It is also possible to arrange rides in-person; these usually costs less than a dollar to $1.50. Some drivers in Cebu City may offer to take you around tourist attractions such as the Taoist Temple, the Temple of Leah, Tops, and Sirao Peak for a fee that usually ranges from $14 to $20. As a courtesy, it is highly recommended that tourists not let their drivers wait too long while enjoying the sights.

Locals and tourists may also opt to take taxis around the city. The usual Grab and Easy app-contracted services are available at any point in major cities, with fares negotiated before the driver picks the passenger up. Standard taxi-services operate at a [usually cheaper] fixed flag-down rate below $1, with an additional $0.07 for every 500m distance traveled, or for two minutes waiting time in traffic. Keep in mind that Cebu City traffic is notorious for its traffic jams, which continue to worsen to this day. However, Cebu taxis are considered generally reliable and always keep their meters on.

Those willing to shell out a bit more may also opt to contract large, private vehicles beforehand, particularly if they’re carrying a lot of luggage or need a speedy lift to isolated areas outside the city. Luckily, there are a number of accredited car and/or van rental services in Cebu to choose from. Their standard vehicle offers usually include Asian utility vehicles or vans. The rental of these vehicles is notably pricier than public transportation, with fees in the thousand pesos range for a few hours. However, this remains to be a popular option among tourists because of the utmost convenience that a rental vehicle provides. Tourists may plan their entire itinerary at their leisure, including pick-up and drop-off at their own hotels. With this option, travelers are given practically complete control of where and when they want to go. Moreover, they can entrust their safety with highly competent and experienced chauffeurs. If you hold an international driver’s license, are feeling confident and have the skills required to drive on a Filipino road, you can also opt to drive yourself around, which cuts the cost by a great margin. Just a word of warning, drivers in the Philippines do not always follow the rules, so be careful and watchful. But it’s all part of the adventure, right?

Transportation options in Cebu don’t end here; they go beyond the shoreline. Since the Philippines is an archipelago, it is common for provinces and even cities to be separated by large bodies of water. People have found ways to make this work by incorporating boats into public transportation, allowing commuters and tourists to ride from island to island at their own convenience (that is, so long as they reach the pier at the right departure time). There are fastcraft ferries, RORO (roll-on, roll-off) car ferries, and multi-decked passenger vessels. Reserving a seat on any of these vessel boats will cost you anywhere from $2 to $20. Cebu now also has the newly introduced Waterbus, with more regularized operations. The Waterbus sails from Cebu City to neighboring sites such as Talisay City, Minglanilla and Naga City, Dalaguete, Oslob and Santander. It can accommodate 50-70 people with an estimated fare of $3 to $4 per person.


Cebu is full of beautiful sights both locals and tourists can enjoy. Getting to all of them is a grand adventure in its own way. Between destinations are picturesque, panoramic views that people can enjoy rushing past from the inside of a moving vehicle. Tourists can also enjoy getting to know the local scene through their public transportation system, which is a major vein in any city’s culture and speaks volumes about daily life lived there.


More information about Cebu commute and getting around Cebu City, Philippines:

Did you find this article helpful? Here are other articles that could help you in getting around Cebu City: 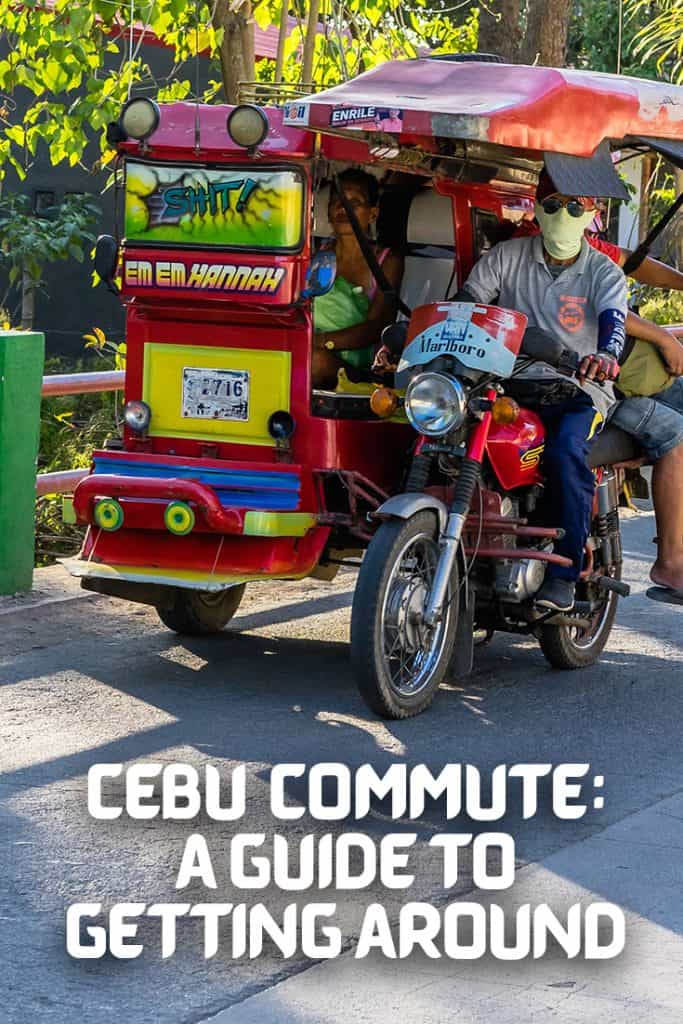