Things To Do In Ho Chi Minh City for Backpackers

Things To Do In Ho Chi Minh City

Ho Chi Minh City is the main hub of Southern Vietnam. Most backpackers will find themselves here at some point as they make their way through the country. Ho Chi Minh City (formerly known as Saigon) has a little bit of something for everyone. The city is noticeably diverse and if you’re from a Western country you’ll definitely spot recognizable brands from home as you wander the streets. At the same time, everything is offered with a distinctly Vietnamese flavour. There is lots of local culture to experience if you know where to look. There are so many things to do in Ho Chi Minh City, from great museums to beautiful churches to a lively nightlife scene.

With so much going on, it can be hard to know where to start. If you’re planning a trip or you’ve just arrived and you’re not sure what to do in Ho Chi Minh City, check out this list. All of these Ho Chi Minh City attractions are guaranteed to make for a memorable visit!

The War Remnants Museum is a moving display of the terrible affect war has on civilians. The exhibits are composed of artifacts from the Vietnam war.  On the walk in through the courtyard you’ll pass several large American aircraft and armored vehicles that Vietnam captured. Inside, photographs and personal accounts relay the horrors of the war. The tone of the exhibits is somber, but there’s also a palpable pride by Vietnam for its military achievement in defeating the massive American military complex. Some say the displays are biased and amount to anti-American propaganda (the museum’s old name, before diplomatic relations with the USA resumed, was “Exhibition House for US and Puppet Crimes”). However, some of the most powerful photographs on display come from American sources.

Whatever your own feelings towards the war are, the War Remnants Museum is one of the most popular things to do in Ho Chi Minh City. It attracts about half a million visitors every year, and two-thirds of these are foreigners. The displays, especially those depicting the aftermath of the ‘Agent Orange’ chemicals sprayed, will stick with you long after your visit. This is an important historical stop for backpackers in Ho Chi Minh City.

While museums in Ho Chi Minh City mostly recount the stories of war, the Ho Chi Minh City Museum is focused on the stories of colonization that happened in the city.
Formerly known as the Gia Long Palace, the history of this place spans for more than a century, as it is used as a house for some of the colonizers in Vietnam, which includes French Henri ÉloiDanel, and Japanese Governor Yoshio Minoda, to name a few.
If you’re looking for a more in-depth history lesson about Ho Chi Minh City, this place is your best choice. While some of the stories are not presented in a more detailed manner like in War Remnants Museum, the Ho Chi Minh City Museum has old ceramics, maps, and retrieved artifacts to tell the stories for you, recounting the establishment’s construction in the 19th century and the different colonizers that stayed here.
The Ho Chi Minh City Museum is also dedicated to the nationalistic acts of Vietnamese to freedom, with a floor specifically aimed to tell that side of Saigon’s story during the colonization era.
The external structure of this place is an eye-grabbing sight, which is of neoclassical influence. An actual tank used in the war is prominently positioned outside, as well as a retrieved helicopter, also a remnant of the war.

The Cu Chi tunnel happens to be one of the few places here in Ho Chi Minh City that is restored properly because of the richness of the history behind it. It serves as a hiding ground for Viet Cong (VC) soldiers during the Vietnam War, as well as an area for medical operations, tactic planning, resting ground and communication procedures between the soldiers.
Measuring up to 75 miles long, it connects two sites – the Ben Dinh and Ben Duoc tunnels, also both serves as an important place for military tactics.
The Cu Chi Tunnel was preserved so well that booby traps set by VCs for potential attackers are still intact. Here you can also see how the VCs perform their tactical operations with trap doors and crawling space restored and renovated after the place was bombed by the United States during their raid in 1969.
Guests who come here are treated with local Vietnamese snacks. But it was not just your ordinary delicacies, what they serve here are foods that are commonly eaten by VCs during their stay here. There’s also a shooting range where you can try different military weapons. Selection of guns include the M60 and the AK-47 or the M16. 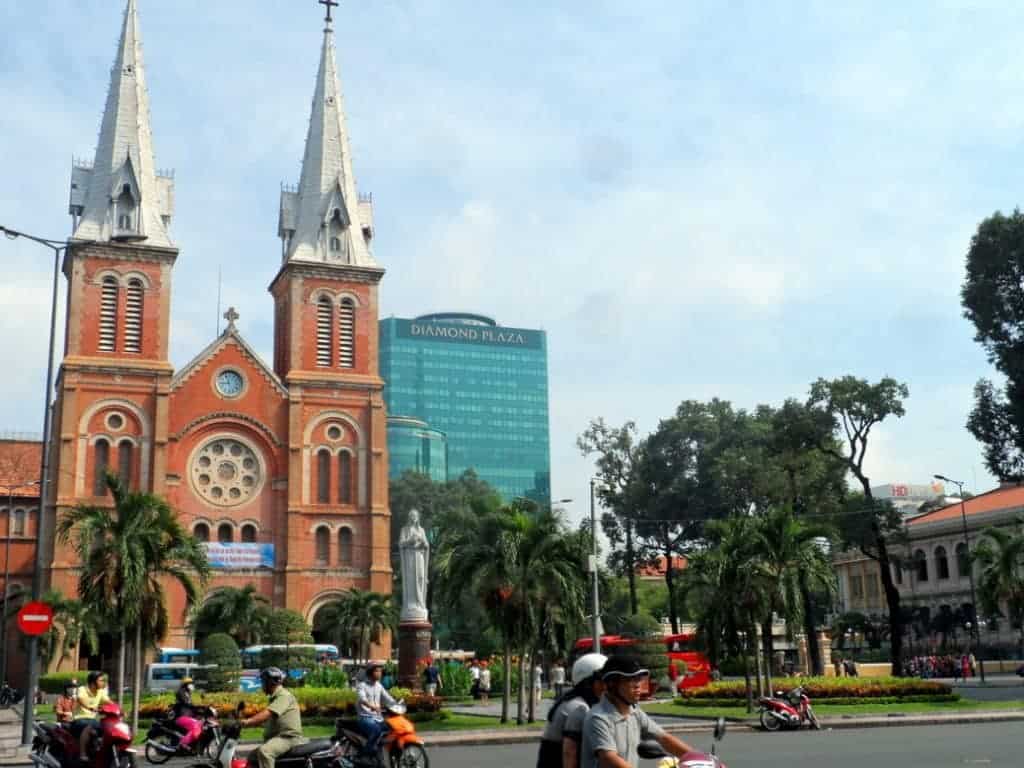 Within the busy streets of the downtown part of Ho Chi Minh City, a large, peaceful cathedral known as Saigon Notre Dame Cathedral Basilica (simply referred to by the city residents as Notre Dame Cathedral) can be seen.
This cathedral was built in 1880, but with careful restoration, it managed to retain its beautiful architecture inside out. It’s easily one of the most visited churches in Vietnam, and if you’ll ask anyone in Ho Chi Minh City what is the most iconic place in this city, the majority’s answer would direct you to Saigon Notre Dame Cathedral Basilica.
It’s also a place reported to have miraculous stories. There was a big moment that happened here in 2005, wherein the figure of Virgin Mary positioned outside the cathedral was said to weep tears one day. There were no proofs to support this claim, but it really became a big thing to the people there at the time.
This church is located at one of the most crowded areas in Ho Chi Minh City, but entering here is something else entirely. Everyone here is very disciplined and calm, a perfect place if you want to be in a serene and quiet place in an otherwise busy city. 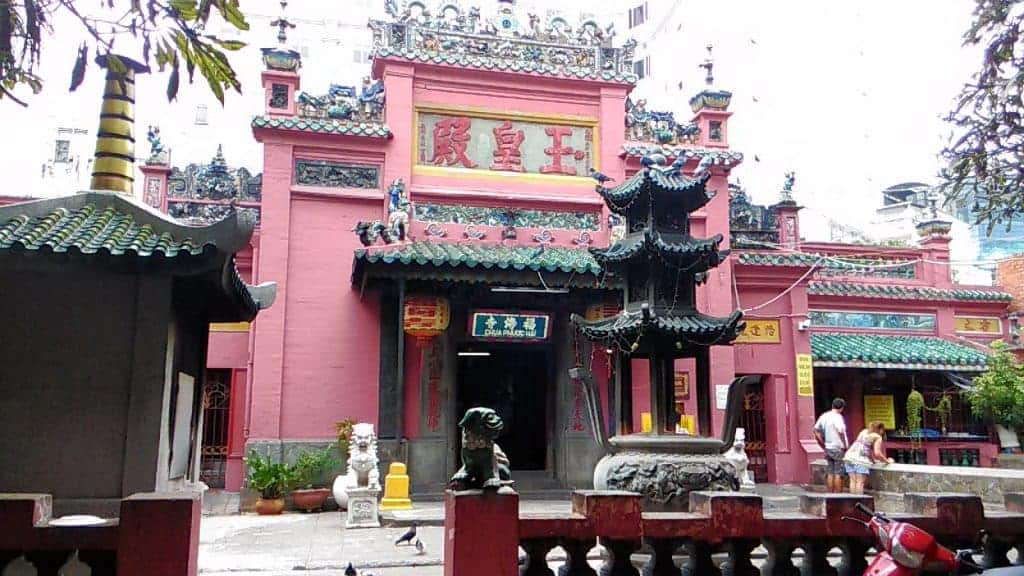 Religions are obviously a huge thing and are widely respected here in Ho Chi Minh City. The Jade Emperor Pagoda is focused on the Taoism belief, and this monument isn’t going to be a difficult find as it is a large and tall establishment, with its distinct architectural design almost overshadowing other places near it.
Built by a Cantonese group who immigrated in Saigon in 1909, this religious site is aimed towards Emperor Jade Chua Ngoc Hoang, the “God of Heavens.”.Entering the pagoda, you will instantly be greeted by the emperor’s tall statue and incense smoke.
Aside from the Jade Emperor, other important figures of Taoism have their own statues, with their contribution/ important role to the religion also shown.
Since admission is free, expect a huge crowd coming here especially on holidays or special occasions. Better yet, go here as early as possible to have a clearer and better look on all the things you can find here, which includes watching and join in the daily religious practices.

If there’s a building here in Ho Chi Minh City that has become a huge presence or a very important symbol during Vietnam’s wars with France and U. S., it is undoubtedly the Reunification Palace.
This place has seen and witnessed all of it. It initially served as a working place and home to previous Vietnamese presidents. A lot of major war strategies and tactics are also planned here, which is no surprise since this exact base easily became the main targets of opposing forces during the war.
But the Reunification Palace wouldn’t be as iconic and important now (and would probably not be called as such) without the infamous event that happened in 1975, wherein a tank crashes into the place’s gates. It is not made as an attack to the people inside the palace, but as a sign that the Vietnam War in Saigon has ended. A photograph showing just this moment instantly won people not just in Vietnam, but from other parts of the world.
Now, this tank can still be found outside the palace including a helicopter that also became a huge part of the Reunification Palace’s history. 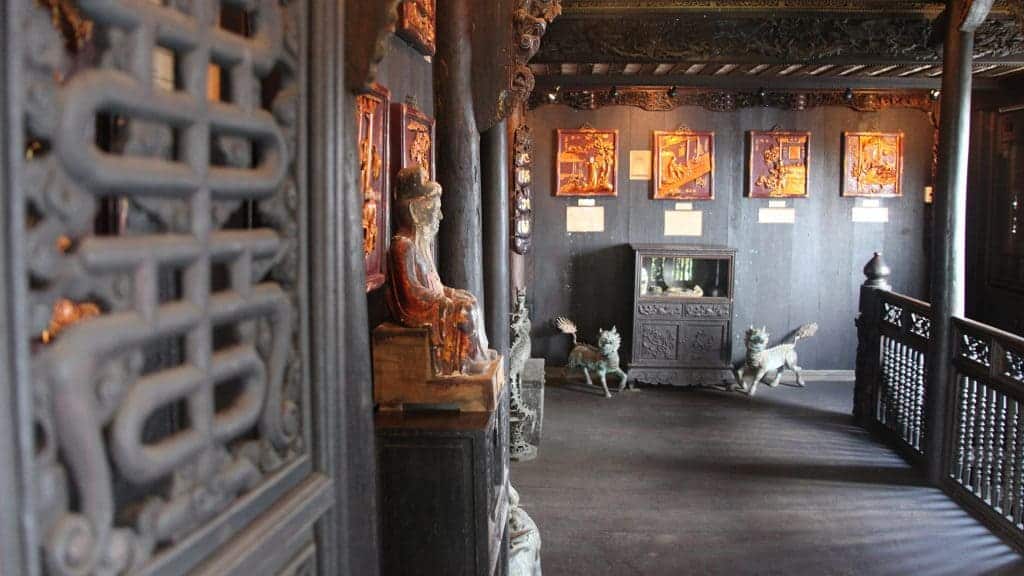 Here’s an interesting one. FITO Museum actually has two establishments built that are focused on preserving medicine history, there’s one specifically aimed at pharmacy in Binh Duong Province but the bigger one can be found here in Ho Chi Minh City.
The Museum of Traditional Vietnamese Medicine has artifacts that date back as early as the Stone Age, with preserved tools and medicines pivotal to the medical processes being made throughout the years. There’s a lot of fascinating stories and information you can learn here, with 18 exhibition rooms and a documentary feature presentation going into the different aspects of the history of traditional medical practices.
This museum also has a built-in souvenir shop where you can purchase herbal medicines and teas displayed in the exhibits.

More Reading on Things To Do In Ho Chi Minh City:

We only recommend writers and blogs that we read regularly and believe will deliver substantial value to our readers. The following are our top picks for articles we think are worth reading for more things to do in Ho Chi Minh City: