Palaui Island got the attention of the world when it was used as the filming location for “Survivor: Cagayan and Survivor: Blood vs. Water.” It also boasts of being in the 10th spot of CNN’s World’s 100 Best Beaches.
Located off the northeastern extremity of Luzon Island part of the municipality of Santa Ana, Cagayan province, Palaui Island, which is only about 2,439 hectares, offers a verdant landscape of meadows and farmlands,  lush forests and stretches of white, coralline beaches, mangroves and volcanic rockscapes.
In 1994, the island was declared a National Marine Reserve. Surrounded by 50 hectares of coral reefs, the island is 70% covered with forest which provides a refuge for a variety of animals and 90 species of migratory birds. And on the forest floor there are land crabs, a crustacean species that thrives away from the sea.
There are several small islets that surround Palaui which  includes Escucha, Dos Hermanos, Gran Laja Island, and  Crocodile Island.

The local residents  who live in the island’s only village called Punta Verde, is made up of only a little more than 200 families, 30 of those are of the Aeta or Agta tribe, who make their living through farming and fishing.
The Agtas belong to the Negrito ethnolinguistic group who are characteristically short, dark-skinned, kinky-haired, thick-lipped, and small-nosed.  This group worship the spirits of their ancestors called Anitos and conduct rituals that include dancing.

Places to visit in Palaui Island

Palaui Island’s  main tourist attraction and the most visited spot is found in its northern point called Cape Engaño.  At the highest point of its hill is the ruins of the Cape Engaño Lighthouse where one can get to see a 360-degree view Palaui, Dos Hermanas, and Babuyan islands. To get to the lighthouse, there is a trail and a 229-step staircase from the Engaño Cove.
Also known as Faro de Cabo Engaño, Cape Engaño Lighthouse which was built in 1892, is one of the four lighthouses constructed during the Spanish Colonial period that had served as a guide for incoming vessels from the Pacific Ocean. 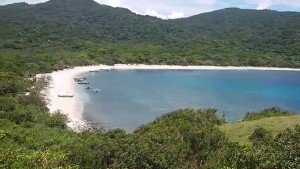 Siwangag Cove was used as the home of the Galang tribe in the television show,”Survivor: Blood vs. Water” and later was also used by the Aparri and Solarrion tribe camps in another episode called, “Survivor: Cagayan.Siwangag Cove.”
The cove is a sheltered anchorage covered with mixed pebbles, broken corallines, downy sands, and flings of shells. During the Spanish era, it was used to bring provisions to the lighthouse. One can still see the ruins of a Spanish port and the towering pillars by the shore. This is is also where the 229 steps to the Engano Lighthouse begins.Today the cove is used as shelter for small boats against the strong northwest and west winds.
Siwangag Cove may be accessed on a boat from the Port of San Vicente either on the following routes: direct to Siwangag Cove or via Punta Verde, about 15 minutes boat ride plus a three to four hours trek.

Home to a small fishing village, Punta Verde serves is the main entry point of Palaui Island’s hiking and camping visitors. Here, travelers are required to register on a naval detachment unit stationed within the island.
Punta Verde is the only village in Palaui Island where tourists are allowed to camp.  This is a rule imposed by the Cagayan Economic Zone Authority (CEZA) to keep the the islands clean from trash left by tourists.
The whole island of Palaui has no electricity which gives a more back-to-nature experience for visitors.  At the Punta Verde Nature Village however, there are some electricity from car batteries and solar power for only a few light bulbs which is turned off at 11:00PM.
There are also intermittent cellphone signals for Globe and Smart providers at Punta Verde while the rest of Palaui has no signal at all.

Manidad Island popularly known as Crocodile Island, not because of the presence of crocodiles, but more because of its shape — an outcropping of rock in the middle of the sea that resembles the reptile’s head. The island is usually part of the Palaui tour package which  only takes 15 minutes to go around it.
The island has a wide beach during low tide and  is a popular picnic ground, due to its proximity to San Vicente port.
You can smell the scent of shellfish on Crocodile Island. The place  is rich in wild oysters, sea urchins and starfishes where you can buy or even pick up a few oysters to eat. You can also climb the rock to get a spectacular view of Sta. Ana and Palaui Island.

Another way of enjoying Palaui Island is on foot.  There are two hiking paths through the island: the Lagunzad Trail Hikes and the Leonardo Trail. The easier one is the Lagunzad Trail Hikes which takes roughly two hours from the fine shores of Punta Verde Beach through mangroves, dense forests and verdant grasslands where one will see grazing cattle and carabaos. The Leonardo Trail is for the more seasoned hikers which offers a more challenging path through mountainous interiors with a side trip to the Baratubot Falls.

How to get to Palaui Island

From Manila you can either take a bus, or fly.  The bus ride is 16 hours from Manila to Santa Ana, Cagayan. Check out the following bus companies: Victory Liner, Florida Bus Liner, Partas, etc.
You can also take a bus ride to Tuguegarao where you can take a van going to Santa Ana, in Cagayan.
By plane you can fly to Tuguegarao and upon reaching the airport, cross the street and hop into a van or bus bound for Santa Ana, Cagayan.The ride will  take about three to four hours
To your final stop — the Santa Ana Market where you can buy  food, water and other essential items. From here, take a tricycle going to Santa Vicente Port then pay for a boat ride going to Palaui Island.
If you want to fly, check out PAL Express and Cebu Pacific from Manila to Tuguegarao City —the capital of Cagayan province. This is where you take the van to Sta. Ana, the nearest point to Palaui Island.

The nearest hotels and resorts to Palaui Island are in Sta. Ana which is a boat ride back from where you came from upon arrival. If you wish to stay in Palaui, you can either camp in Punta Verde or check out the home stays. Most visitors stay at Punta Verde where the locals of the island are situated too. Here, tent accommodation and cottage accommodation are available. for Php250.00. Tent is included. You still have to pay Php250 if you bring your own tent.
Below is a list of hotels and guesthouses in Santa Ana town:

Barangay Centro, Santa Ana
Jotay Resort  is a budget-friendly beachside accommodation that  starts at PHP 800 for a double fan room.  It is a small friendly resort with a restaurant and bar located right on the beach.
Surrounded by waters Jotay Resort is ideal for whale and dolphin watching, snorkeling, fishing, hiking or just lazing on one of the many beaches.

Amenities
Department of Tourism Accredited.
A member of SAHARRA (Santa Ana Hotels and Resorts, Restaurants Association)
Hi-speed internet and Wi-Fi available in all guest rooms, the main function room, and the bar and restaurant.
Large Capacity Generator on site

Country Inn by the Sea

Barangay Centro, Santa Ana
Country Inn by the Sea is another great-value seaside stay.  The rate starts at P1,500 for an air-conditioned room for three.
Centrally located at the municipality of Sta. Ana, it is near the public market, the municipal town hall, casinos, and public transport vehicle terminals.
Amenities
fully air-conditioned rooms
hot and cold bath
cable tv
beachfront accommodations
There are also Suites available that have cable tv, hot/cold bath AC, refrigerator, dining area, and a veranda/terrace that faces the beach.
2-bedroom bungalow houses for a family of 4 to 6 are also available.  This include: 2 toilets and hot/cold bath, cable tv in every room, kitchen with cooking range and utensils,refrigerator, dining area, and a garage.

Dugo San Vicente Road, Barangay Tangatan, Santa Ana
Cagayan Holiday & Leisure Resort  also called Sun City is a luxurious five-star hotel that starts  at P6,200.
The resort is located just steps away from Sun City Beach,  and 20 minutes by car to Port Irene. Tuguegarao Airport is about three and half hour drive and are available.
The hotel boasts of an outdoor infinity pool, a private beach area,casino, private airstrip and well-appointed villas and elegantly furnished rooms.
Amenities
Minibar
Flat-screen cable TV
Sofa and tea/coffee making facilities.
DVD player
Free internet access in all public areas
Free airport shuttle services
Free access to the fitness centre and sauna room
Relaxing spa treatments
24-hour reception and banquet halls
Room service
Activities
Water sport activities such as Banana Boat and Jet-ski rentals can be arranged.
Food
A selection of Western cuisines can be enjoyed at Edge Restaurant while The One Restaurant serves an array of Chinese dishes. Meals can also be served in the room upon request.

It’s better to visit Palaui Island in the Visit the summer — from February to May to avoid rough sailing and to better enjoy trekking activities.
Travel with a group to minimize the cost of boat rental etc.
Register at the tourism office located at the San Vicente Port for security purposes.
Sign up for a tourist guide so you don’t get lost.
If you are to camp out overnight in the island, bring camping gears and inform the tourism office for your safety.
Bring enough food, drinking water, flashlight, garbage bag, first aid kit, mosquito repellent and waterproof cases to secure your electronics and valuables.

We only recommend writers and blogs that we read regularly and believe will deliver substantial value to our readers. The following is our top picks of articles on Palaui Island in the Philippines that we think are worth reading:

Do you have an awesome link to a relevant well written article that should be included here? If so, hit us up on Twitter by following and messaging us the link. Looking for the best budget stays in the Philippines? Check out our guide to the Philippines for further information.