Rome in two days, what to see, where to go, where you need to visit – a complete itinerary for an awesome two days or weekend in Rome

You only have two days in Rome and want to see as much art as you can. Here’s a traveler’s quick guide to Rome’s famous works of art that you can see in just 48 hours, plus some of the famous sites you can visit.  You should be able to pack all of this into a 48 hour period, making it an ideal two day itinerary for a weekend in the capital city.  Of course feel free to change any aspect as you need, so lets start!

Beat the crowd to visit St. Peter’s Basilica, which opens at 7am. There you will see Michelangelo’s Pietà and the other amazing works of art. The Pieta, that combines both the Classical and Renaissance styles depicting the limp body of Christ on the lap of his mother, Mary, is the first of a number of works by Michelangelo of the same theme. It is the only work that the artist ever signed. The sculpture, which is made from Carrara marble, was commissioned as a funeral monument for the French Cardinal Jean de Bilhères in 1498.
By 8.45 you have exited the church to walk towards the world-famous Vatican Museums, which open at 9am. At the Pinacoteca painting gallery, you will get to see Raphael’s Transfiguration, considered to be the artist’s last painting created from 1516 to 1520. The tempera on wood depicts the contrast between the redemptive power of Christ located above the painting and the dark, chaotic flaws of Man, at the bottom half. Another famous work at the same gallery is Caravaggio’s Deposition or Entombment of Christ, an oil on canvas created from 1603–1604 that depicts mourners and cadaver-bearers descending to the dead Christ.
Also to be viewed are the four Raphael Rooms at the public part of the papal apartments in the Palace of the Vatican. Painted by Raphael and his workshop, the famous frescoes including Michelangelo’s ceiling frescoes in the Sistine Chapel, mark the height of Renaissance in Rome.

Day One PM – Visiting the Pantheon

By 11am you may have exited the Vatican and be able to take a brief tour of the Pantheon after a brief lunch. The Pantheon is the most preserved temple of ancient Rome that was dedicated to all the pagan gods.
Then at the nearby church of Santa Maria Sopra Minerva you will get to see Michelangelo’s Risen Christ statue made from marble and created between 1519- 1521 A.D. It shows a standing, naked figure of Christ holding a cross. Later, additions were made to the sculpture such as nail-holes in Christ’s hands and a bronze loincloth were added to hide Christ’s genitalia which has disappointed a lot of people because it now differs from Michelangelo’s original work. Also to be seen is a series of frescoes by Filippo Lippi that cover the walls of the church.
From here you can take a short break at Tre Scalini’s outdoor cafe to enjoy their famous tartufo dessert while viewing Gian Lorenzo Bernini’s fountains in the middle of Piazza Navona square. Titled Fontana dei Quattro Fiumi or Fountain of the Four Rivers, the work, designed in 1651 depict four river gods rising from the base of the fountain supported by travertine rocks. Above them is an ancient Egyptian obelisk with the Pamphili family emblem showing a dove with an olive twig.
Just off the piazza’s east side, you might want to take a quick view of Baroque master Michelangelo Merisi da Caravaggio’s world-renowned paintings at the Contarelli Chapel in San Luigi dei Francesi.
Painted in 1599-1600, Caravaggio depicts the life of St. Matthew in the three world-renowned canvases which placed Caravaggio at the forefront of the new naturalistic movement in Rome. These are: The Calling of St Matthew, The Inspiration of Saint Matthew, The Martyrdom of Saint Matthew.
For dinner, head over to the popular medieval district of Trastevere characterized by narrow, cobblestone streets filled with restaurants, bars, and clubs.

Day 2 AM – The Galleria Borghese

In the morning try to get the earliest reservation possible at the Galleria Borghese villa which is packed with baroque paintings by Caravaggio. Caravaggio is known for pioneering dramatic lighting in painting known as tenebrism utilizing this technique as he captures his subject matter through realism. Here you can see the artist’s known painting, Boy with Basket of Fruit (above) , 1593-94, oil on canvas. The work demonstrates Caravaggio’s facility with realism as he renders individual grapes and the mottled leaves that drape over the basket.
Another interesting work is Saint Jerome, 1606, oil on canvas. This work is known for the single brushstroke that Caravaggio employed when he painted the quill pen. However, the lengthy brushstrokes in the white cloth, the rough application of paint on some of the elements of the painting such as the books, the cloak, and the saint’s beard, gives the impression that the work is unfinished.
Other works by Caravaggio that can be seen here are Saint John the Baptist, 1610, oil on canvas and David with the Head of Goliath, 1606, oil on canvas. 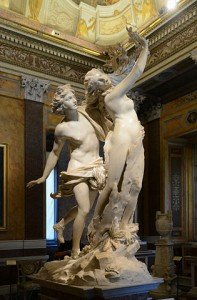 Sculptures by Bernini such as Apollo and Daphne made from Carrara marble (1622-1624) is a life-size masterpiece depicting the nymph Daphne being pursued by Apollo, the god of light as she is turned into a laurel tree.
Pluto and Persephone, (1621-1622) is also based on myth about Persephone the daughter of Jupiter and Ceres who is being taken away by Pluto, the king of the underworld who has fallen in love with her. Bernini’s sculpture depicts the climax of the story that shows Apollo forcefully grabbing Persephone by the hips as she tries to free herself from his grasp.
Renaissance sculptures are usually highly polished and sophisticated. After this period, Mannerism employed distortion and unnatural proportions to forms. Bernini’s dynamic style differs from both. He is the first Italian Baroque artist who applied natural details in his work reminiscent of classicism.
Also by Bernini at Galleria Borghese is David (16220, considered to be one of the first statues in the baroque style. Here David is shown standing in a contrapposto pose, as he twists ready to swing for his shot at Goliath.

Day 2 PM The Palazzo Massimo, The Forum, Church of San Pietro and The Colosseum

Next stop would be Palazzo Massimo alle Terme, a branch of the Museo Nazionale Romano. It is a magnificent treasure trove of ancient and classical art such as 2nd-century-BC Greek bronze; fresco panels dating from 30 BC to 20 BC, fine mosaics, rare inlay work; a coin collection, jewellery that goes back several millennia, and a mummified eight-year-old girl dating from the Roman Empire.
From here, you can take a quick walk around at the Forum, a rectangular forum amidst the ruins of several important ancient government buildings. Then you can walk towards Cavour 313 an old-school wine bar for lunch. With over 1200 labels to choose from, you can enjoy their juniper berry-smoked herring with slices of granny smith apple or the assorted charcuterie grazing boards and terrines.
If you still have time, you can climb up the steps of a tunnel-like street towards a tiny piazza where the church of San Pietro in Vincoli is located. Here, you will get to see Michelangelo’s sculpture, Moses (1513-1515) which was to be part of the tomb of Pope Julius II. It is a seated Moses, his beard descending to his lap with his chair standing between two decorated marble columns. This same figure has appeared in Michelangelo’s Sistine Chapel frescoes a year earlier.
Next, pay a visit to the Colosseum (70–80 A.D.), an oval amphitheater made of sand and concrete. It is considered to be one of the world’s greatest works of architecture and engineering.
By 5PM you can catch the bus to head back up Via dei Fori Imperiali to Piazza Venezia at the north end of the Forum. Nearby is the Capitoline Museums where you can get to see ancient Roman statues, inscriptions, artifacts; a collection of medieval and Renaissance and Baroque art, jewelry, coins, and other items.
By evening time, make your way over to the Spanish Steps then window shop down Via dei Condotti and find yourself a nice restaurant for a hearty dinner. 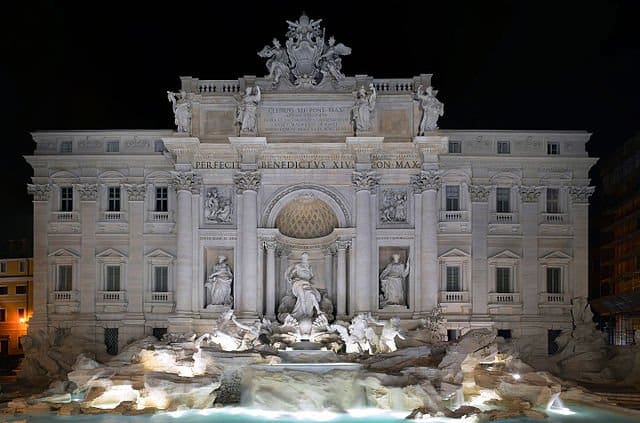 Before you call it a day, head to the famous Trevi Fountain (1762) where you can make the traditional coin toss. The fountain is the largest Baroque fountain in the city designed by Italian architect Nicola Salvi and completed by Pietro Bracci.

We only recommend writers and blogs that we read regularly and believe will deliver substantial value to our readers. The following is our top picks of current articles we think that are worth reading for more reviews and information on Rome’s art.

Do you have an awesome link to a relevant well written article that should be included here? If so, hit us up on Twitter by following and messaging us the link. Looking for the best budget stays in Rome? Check out our guide to Rome for further information.