How famous is Rome Street art? Well graffiti did not begin in New York City as many believe but in Rome.  However, for many years, the street art scene in Rome had struggled to be recognized and accepted as an art form.
To the delight of some artists and despite the opposition of others, legal walls have increased to allow for more art to practically paint the city. Today, a number of talented artists who are creating in this genre are beginning to be recognized by formal art institutions.
To help guide tourists and visitors to the vibrant street art in Rome, a project, known as Street Art Roma traces the street art scene in Rome, and the peculiarities of the individual works along with the cultural context and social environment in which the creators have taken their inspiration from.
Below are some of the interesting samples of street art you can check out. 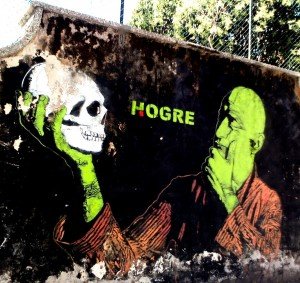 Students of the University La Sapienza mostly live in San Lorenzo where most of its streets — from via dei Volsci to via degli Enotri and a collective wall through the degli Ausoni — are decorated with street art.
The area is recognized as one of Rome’s art districts. It was the site of the “Graffiti Convention” in 2010 and “Urban Contest” in 2012 and home to various works by famous international street artists including a block-long mural by Alice Pasquini, a visual artist from Rome who has traveled widely painting the streets of various cities across the globe.
Also to in this area are works by the following famous artists such as: French artist Christian Guémy aka C215, also known as “France’s answer to Banksy”; Italian comic street artist, SOLO whose works take inspiration from comics and pop icons; Unga from one of Israel’s best-known graffiti collectives abroad, the Broken Fingaz Crew who have spray-painted innovative pop-art murals in Europe, North America, and Asia.; and artist, ABOVE, a Californian born, Berlin-based international street artist who, like Banksy has also chosen to hide his identity.
The fun and informal environment of San Lorenzo has become a fertile ground for Roman artists who have made the walls of the city their a playground.

Pigneto – The Home Of Stencil 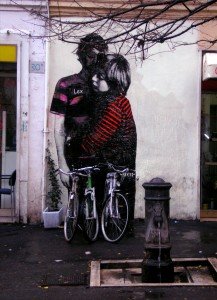 The Pigneto neighborhood located roughly to the east of the Colosseum and extending behind the Termini station, is predominantly an industrial area full of street art.
The neighborhood of Pigneto has become a viable alternative for many street artists and can be considered as a competitor of San Lorenzo. The well-known street artists whose works are displayed here are: Hogre, whose stencils can be found all over Rome that mostly exhibit irony such as a guy picking his nose with written words to mean, “Search inside yourself;” and other known street artists are Alt Novesette aka Alt97, Uno, Hopnn and #cancelletto# who also have chosen Pigneto as a site for their works.
Some walls in Pigneto are now famous such as a picture of a couple in a tender embrace by Sten & Lex, considered to be the pioneers of “stencil graffiti” in Italy and worldwide, known for discovering the half- shade stencil technique they had dubbed as “Hole School.”
The self-taught duo have been doing street stencils since 2000, and now have works in the streets not just in Rome, but in London, Paris, Barcelona, and New York. 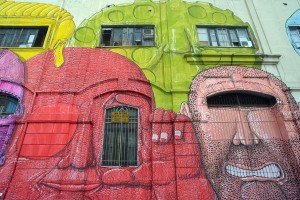 The Ostiense district is a modern neighborhood where the first power station of Rome is located.  It is also an area where some of the most contemporary creative expressions are found  likened by the international press to Belleville in Paris, Brick Lane in London, and Wynwood in Miami.
Over the years public art or street art in Rome has been concentrated in the Ostiense area, with more than thirty large public works which has become part of the city’s cultural tourism.
The Ostiense District is now regarded as a contemporary space initially conceived by the contemporary art gallery 999 to promote the area between the Piramide and San Paolo, a project supported by the Office for Culture, Creativity, Artistic Promotions and Tourism under the Department of Culture of Rome Capital through the ‘Public Notice “Creative Rome”.
The Ostiense District first made its mark in 2010, when the Outdoor Urban Art Festival started. It was then that JBRock painted the Wall of fame on Via dei Magazzini Generali that depict a red-carpet showing popular contemporary icons.
Other works that can be seen in this area are by Sten+Lex, Ozmo, C215, JB Rock, Kid Acne, Gaia, Borondo, Hitnes, and Lucamaleonte to name a few. Because street art in this area has been legalized, each time world-famous secretive street artist Blu comes by, the city gets a new masterpiece such as pictured above. 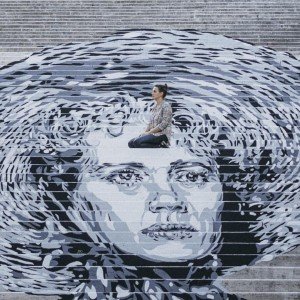 Trastevere is a charming medieval area located on the west bank of the Tiber River that has been spared the modern developments of central Rome. On via Cosimato towards Piazza Santa Maria, one can see a work by Space Invader, a well-known French urban artist whose unique style has made him one of the most recognizable street artists in the world.
Other areas find some wonderful works, including posters by Omino71, a street artist who is inspired by cartoons, Mr. Klevra, whose public art often take on Catholic imagery taking inspiration from Eastern Orthodox iconography using spray paint and Uni Posca pens. In 2008, along with Omino71, and photographer Jessica Stewart, Mr. Klevra embarked on the Eikon project, with the aim of creating Christian-themed street art.
Other works found in Trastevere are posters by Diamond, an artist who applies unconventional techniques in his often dark themes, and UNO, a Russian born artist who uses paper to create repetition, collage, and decoupage; Alt97, known for her Russian dolls; and Alias, who is based in Berlin, and works exclusively with stencils, always signing with his alias: Alias.
And on the steps of Via Ugo Bassi, one will find an impressive work by David Diavù Vecchiato who has portrayed the face of Italian actress. 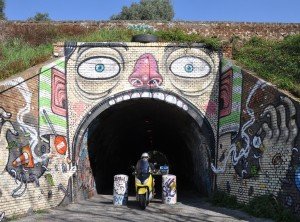 In Quadraro, a working class area of Rome, an experiment in street art has been launched in the hope to consolidate a community for a better a neighborhood through art. Founded in 2010, the MURO Urban Art Museum of Rome set up a project to create socially relevant murals painted by local and international artists, the first project of its kind in Rome.
The main goal of the MURO project is to encourage artists to relate to the community, especially those living in Quadraro neighborhood. Officially started in 2012 with the patronage of Comune di Roma, the project is a continuing work in progress that is always evolving as new murals are being created each the day.
A number of local and international artists who have participated in this project are Nicola Alessandrini, Alberto Corradi, David “Diavù” Vecchiato, Marco About Bevivino, Massimo Giacon, Camilla Falsini, Lucamaleonte, Alice Pasquini, Gio Pistone, Paolo Petrangeli, Alessandro Sardella, Irene Rinaldi, and Mr. Thoms from Italy, and from the US, Gary Baseman,Jim Avignon, Ron English, and Beau Stanton, and Dilkabear from Kazakhstan, Malo Farfan from Mexico, and Zelda Bomba from France.
Cuadraro is well known for the numerous partisans and opponents of the Nazi regime. On 17 April 1944, under the code name Walfisch (Operation Whale), the Nazis rounded up more than almost a thousand men from Quadraro and deported them to concentration camps in Germany and Poland.
David “Diavù” Vecchiato, the founder and curator of the MURO project and a number of murals made for the project portray the oppression by the Nazis done in various styles and approaches which appears that the district is still continuing to come to terms with its dark and sad past.

For a quick guide to Rome’s street art, the map: 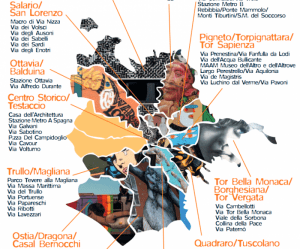 For more insight into Rome’s many street art locations and tips for walking tours.
We only recommend writers and blogs that we read regularly and believe will deliver substantial value to our readers. The following is our top picks of current articles we think that are worth reading for more reviews and information on Rome’s street art.

Do you have an awesome link to a relevant well written article that should be included here? If so, hit us up on Twitter by following and messaging us the link. Looking for the best budget stays in Rome? Check out our guide to Rome for further information.